Is delightful! (at least if you can stay home and enjoy playing in all the snow!)

It started snowing Saturday night…and kept right on snowing…Church services were canceled for the first time this year…and we’ve gotten about 14″ of snow so far, and it’s still snowing…

… WINTER STORM WARNING REMAINS IN EFFECT UNTIL 1 AM EST MONDAY… … WIND CHILL WARNING REMAINS IN EFFECT FROM 7 AM MONDAY TO 7 PM EST TUESDAY…HAZARDOUS WEATHER…
* THE SNOW IS IN THE PROCESS OF TAPERING OFF THIS EVENING. AN ADDITIONAL 1 TO 2 INCHES WILL BE POSSIBLE BY 1 AM.
* NORTHERLY WIND GUSTS OF 25 TO 35 MPH TONIGHT WILL BECOME WESTERLY ON MONDAY AND WILL CREATE BLOWING AND DRIFTING SNOW.
* EXTREME WIND CHILLS WILL DROP TO BETWEEN 25 AND 40 BELOW ZERO ON MONDAY AND CONTINUE INTO TUESDAY.

Doesn’t it sound great?! As long as the animals can stay hunkered down and ride out the wind and especially cold weather I love it! :) I think we’re getting back to the old fashioned winters where it actually gets cold and snows!

It’s been a while. No, it’s been quite a while. Actually, it’s been 6 months, 4 days, and approximately 4 hours since my last post. Fortunately, Matthew has been keeping the blog somewhat sputtering with life, but most would admit that our writings have been few and far between. Like almost once a month.

I will begin by calling your attention to one of the new features of our sidebar: I installed a ‘Cellar’ which has some ‘Buried, but tasty, morsels.’ The first item of business in the cellar is the music player control, of which you can finally see the entire thing (a known problem with our previous setup). To get to the cellar, look for a picture of an underground canning storage center, otherwise known as a ‘Cellar.’ Some of you may have one of these at home. Anyway, click either on the picture or the text below. At the bottom, there’s a link to get back. It’s got some other interesting stuff down there too.

So, if you don’t want the music to play, and have lost the controller, it’s down in the Cellar.

Next order of business: On a contract basis, I’ve started doing tech support for the company mom tutors with (you remember that from back 3.5 eons ago, right? A homeschool supportive, though not exclusive, company that provides English speaking tutors to Koreans? She teaches them over the internet?). It’s kind of challenging work, as the software they use is about 90% broken, as in it doesn’t work. However, we’re now working on transitioning over to another program, that’s much nicer in terms of technical foundation.

And here’s the third and final major announcement: I’m going to graduate this year. I’ve decided that I have spent enough time focusing primarily on academics, and that I’m ready to start focusing on other things, like starting various businesses that I’ve had ideas for for quite a while, and learning new skills, etc. One might also argue that I’m getting tired of Integrands and Anti-differentials. While I don’t plan to go to college, there’s still some more things I’d like to get wrapped up on the academic front–we’re a little over a third of the way through the calculus book, which I’d like to finish, and we’re a little further back in the Adv. Physics book. If I can still add 2 and 2 by the time I get all that done, I think Adv. Chemistry would be interesting, too. But my primary focus will be shifting from stuffing my head with new things that I probably won’t use that much, and switching to useful things.

This, if ya’ll ‘ll get my point, is what you’d call the second half. I’m done making those dull, boring, tedious, stuffy things called ‘announcements’. Now, I’m (hopefully we’re) gonna have some fun. and I just might stop writing in complete sentences. ‘Cuz I said so. Now, wasn’t that fun! Exciting! and enough to make an English teacher about bust? :)

Sunday, over to the church, I’ll be playin’ the piano. For congregation singin’.Ya see, our regular pianist has done gone and messed up her shoulder. The right one, I believe. But she went and tricked it by bein’ a lefty. :) Anyhow, she can’t play the piano, and is goin’ to therapy ‘n all to prove it, so I (being the next-in-line for the bench [Mom resigned her place in that line a while back{It’s really a lot of stress}]) am gonna do if for her. As of now, I’m supposed to be in two places at once. At the piano and At the computer. I still do the projector presentation too (you remember that, right?). It aught to be interesting. :) And it’s my week to play the offertory. So, It’ll be a downright ball, I’m sure. Then, there’s a Solo and Ensemble competition that I’m doing stuff for, that will be on the 21st. So I’m keeping busy with music. :)

I’m afraid I’m running out of apostrophized words, so it’s going to be back to the kings English. Two points for my teacher, eh?

In the way of other interesting tidbits, the weather has warmed up some, not tons, but you can at least go out side without having to wear facial protection from the wind, which has really slowed down in the past couple of days. If you came here looking for a story of Michigan weather, since I haven’t been outside enough to tell you about it (there have been some pretty pressing things inside), head over to Jonathan Bartlet’s place for a harrowing story of heroism in heat-less North Dakota Winter, where a little forethought and some sleep did and could have, respectively, saved the day. I hope that satisfies your taste for snow. :)

Mom and I have also been doing some literary analysis: so far, we’ve done ‘Great Expectations’ by Dickens, and are working on ‘To Kill a Mocking Bird’, by Lee. Other things on the list include ‘Paradise Lost’ by Milton, ‘Macbeth’, by Shakespeare, along with some others.

Now, enough of me, and here’s someone else:

“Anyone who is capable of getting themselves made President should on no account be allowed to do the job.” – Douglas Adams

“When I was a boy I was told that anybody could become President — I’m beginning to believe it.” – Clarence Darrow

“If the American people ever allow private banks to control the issue of their money, first by inflation and then by deflation, the banks and corporations that will grow up around them, will deprive the people of their property until their children will wake up homeless on the continent their fathers conquered” – Thomas Jefferson

You know why there’s a Second Amendment? In case the government fails to follow the first one. – Rush Limbaugh

of it and settled in it,

and you say, “Let us set a king over us like all the nations around us,” be sure to appoint

over you the king the LORD your God chooses. He must be from among your own brothers.

Do not place a foreigner over you, one who is not a brother Israelite. The king, moreover, must not acquire great numbers of horses

or make the people return to Egypt

to get more of them,

for the LORD has told you, “You are not to go back that way again.” He must not take many wives,

or his heart will be led astray.

He must not accumulate

large amounts of silver and gold. When he takes the throne

of his kingdom, he is to write

for himself on a scroll a copy

of this law, taken from that of the priests, who are Levites. It is to be with him, and he is to read it all the days of his life

to the right or to the left.

Then he and his descendants will reign a long time over his kingdom in Israel.” – Deuteronomy 17:14-20

“I pray that out of his glorious riches

he may strengthen you with power

through his Spirit in your inner being, so that Christ may dwell in your hearts

and established in love, through faith. And I pray that you, being rooted may have power, together with all the saints,

to grasp how wide and long and high and deep

is the love of Christ, and to know this love that surpasses knowledge

–that you may be filled

to the measure of all the fullness of God. Now to him who is able

to do immeasurably more than all we ask

or imagine, according to his power

that is at work within us, to him be glory in the church and in Christ Jesus throughout all generations, for ever and ever! Amen.” -Ephesians 3:16-20

Ever in his peace,

What ever happened to Spring??

Yesterday it was warm and sunny….The first day of Spring….What Happened?? 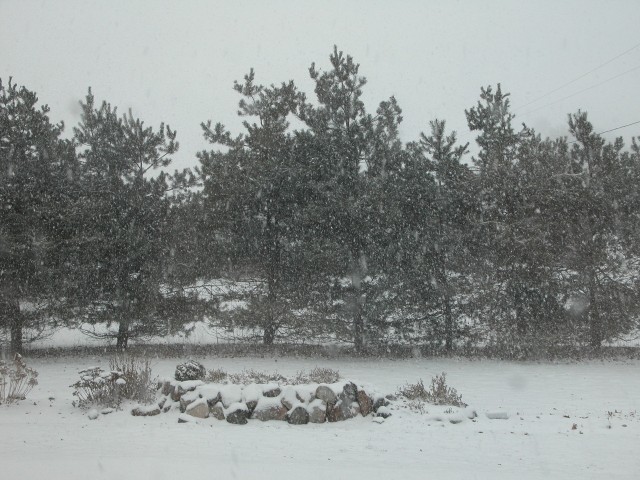 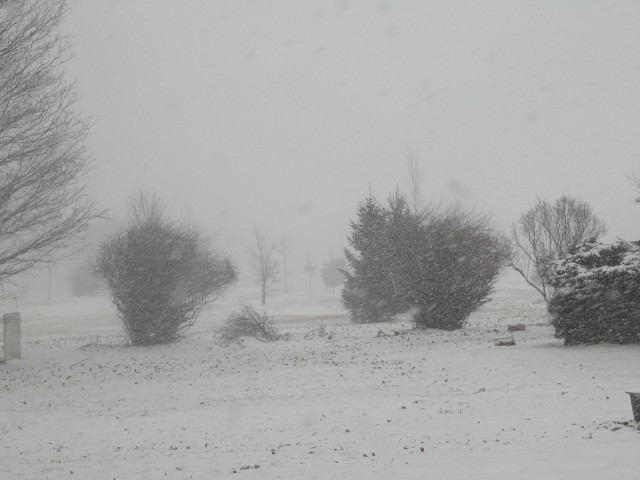 If you click on the pictures you can see the driven snow better. It’s coming down around a rate of an inch an hour. (From my own calculations)

When I took the pictures the ground was just starting to be covered. Now we have just shy of three inches. Good thing we put more wood in the basement this morning before this all started.

…WINTER STORM WARNING REMAINS IN EFFECT UNTIL 8 AM EDT SATURDAY…

SNOW WILL CONTINUE OVERNIGHT WITH SOME BLOWING AND DRIFTING OF SNOW LATER THIS EVENING. THE EVENING RUSH HOUR WILL BE TREACHEROUS. THE SNOW WILL TAPER OFF AFTER MIDNIGHT AND END BY DAYBREAK. EXPECT A TOTAL OF 6 TO 12 INCHES OF SNOW FROM THIS STORM.

I wonder what the Robins are doing….The Red Wing Black Birds are at the feeders eating sunflower seeds, but I don’t see any Robins, they must just be hunkered down some place.

We will have to monitor the hoop house to make sure that the snow doesn’t collapse it….again…..