Posted by Matthew
Tweet
In the month of March our little church was bustling with activity–in addition to regular services and Awana, two couples teamed up to host a Family Game Night; and we also had special services for Easter to celebrate the power and life of our Risen Lord!
At the game night one of the husbands who had worked for a local pizzeria headed up the pizza making–a big mess ensued, but boy was that good pizza! 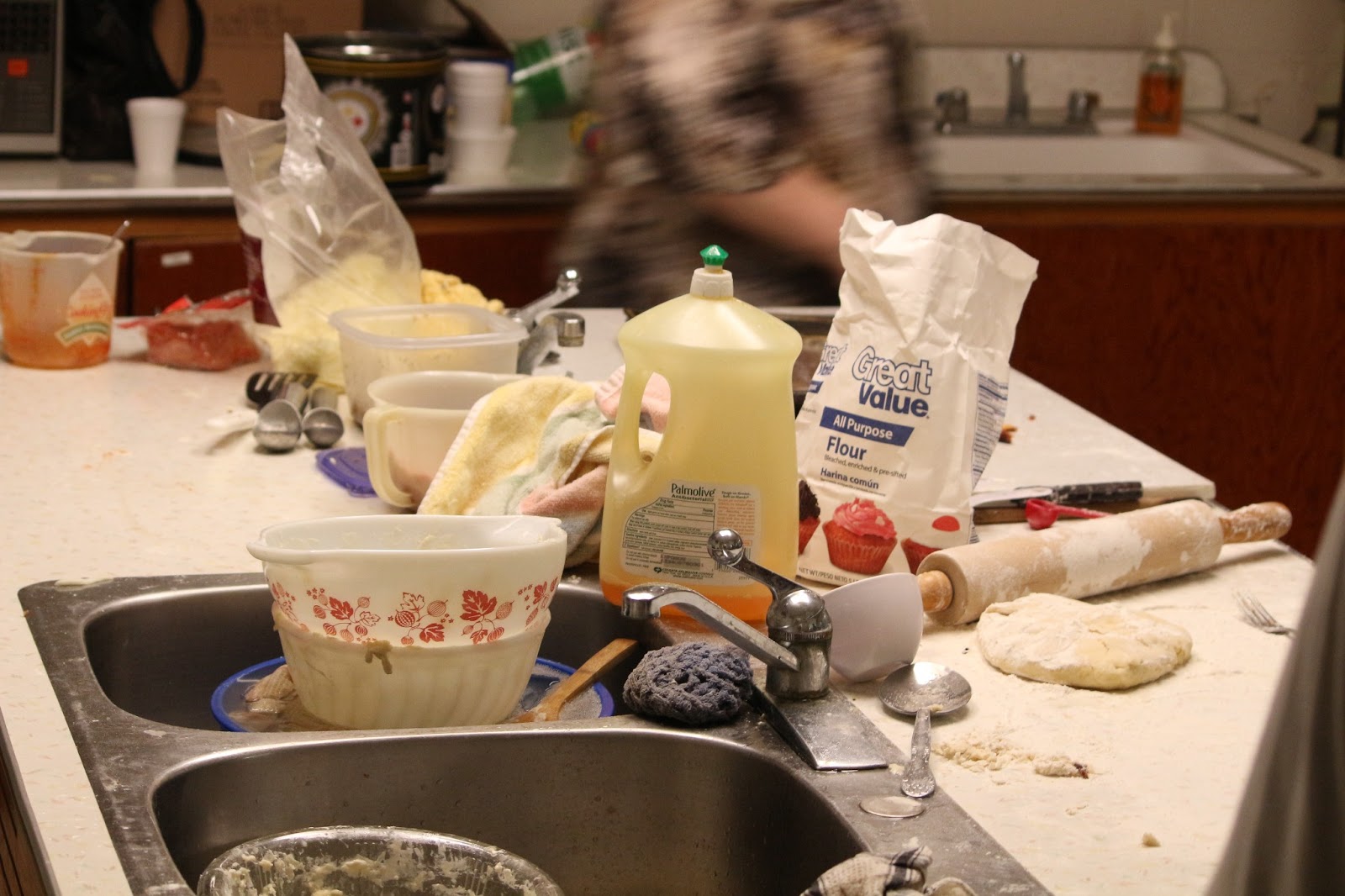 There were a TON of games to choose between–from board games…. 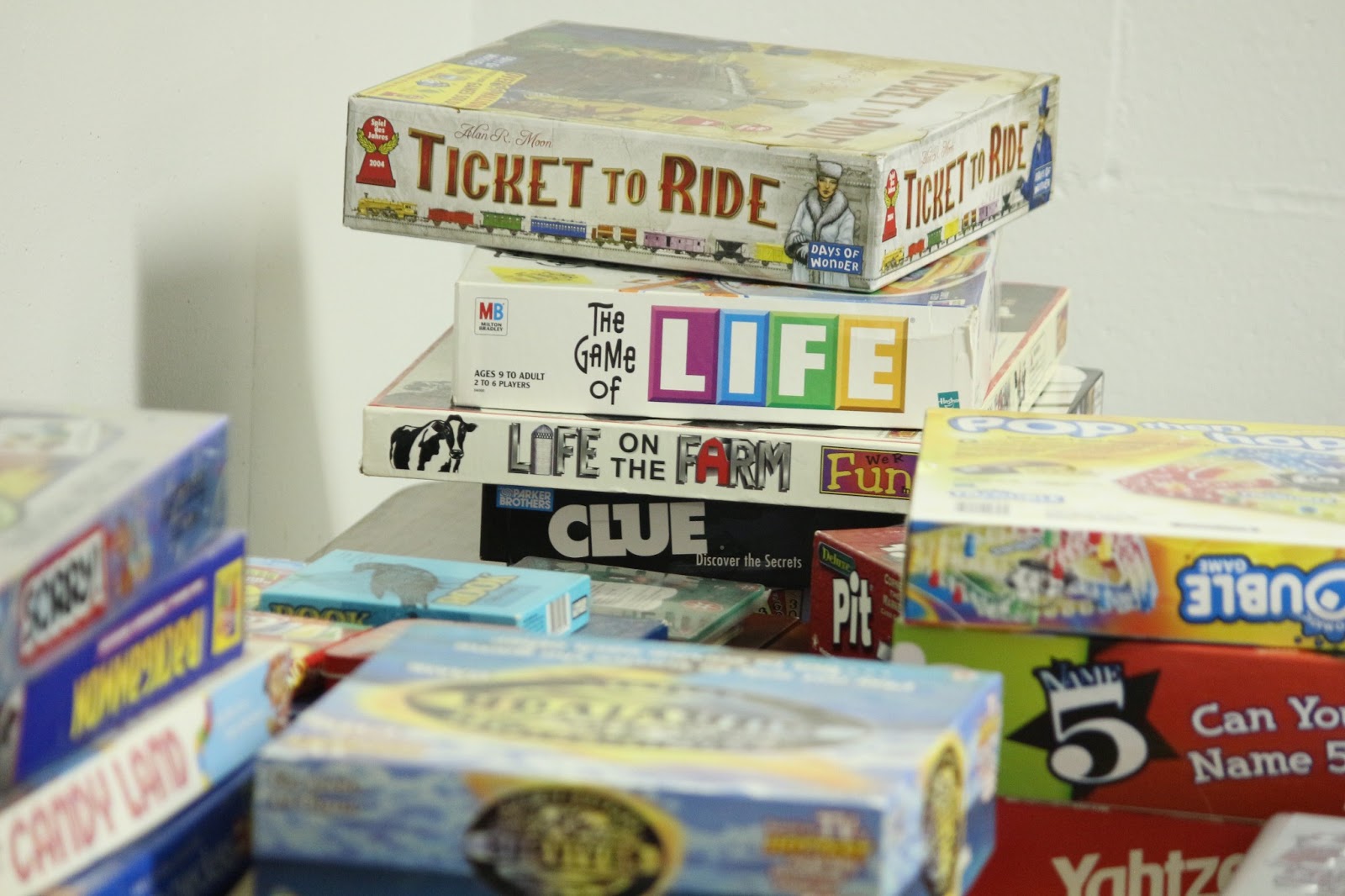 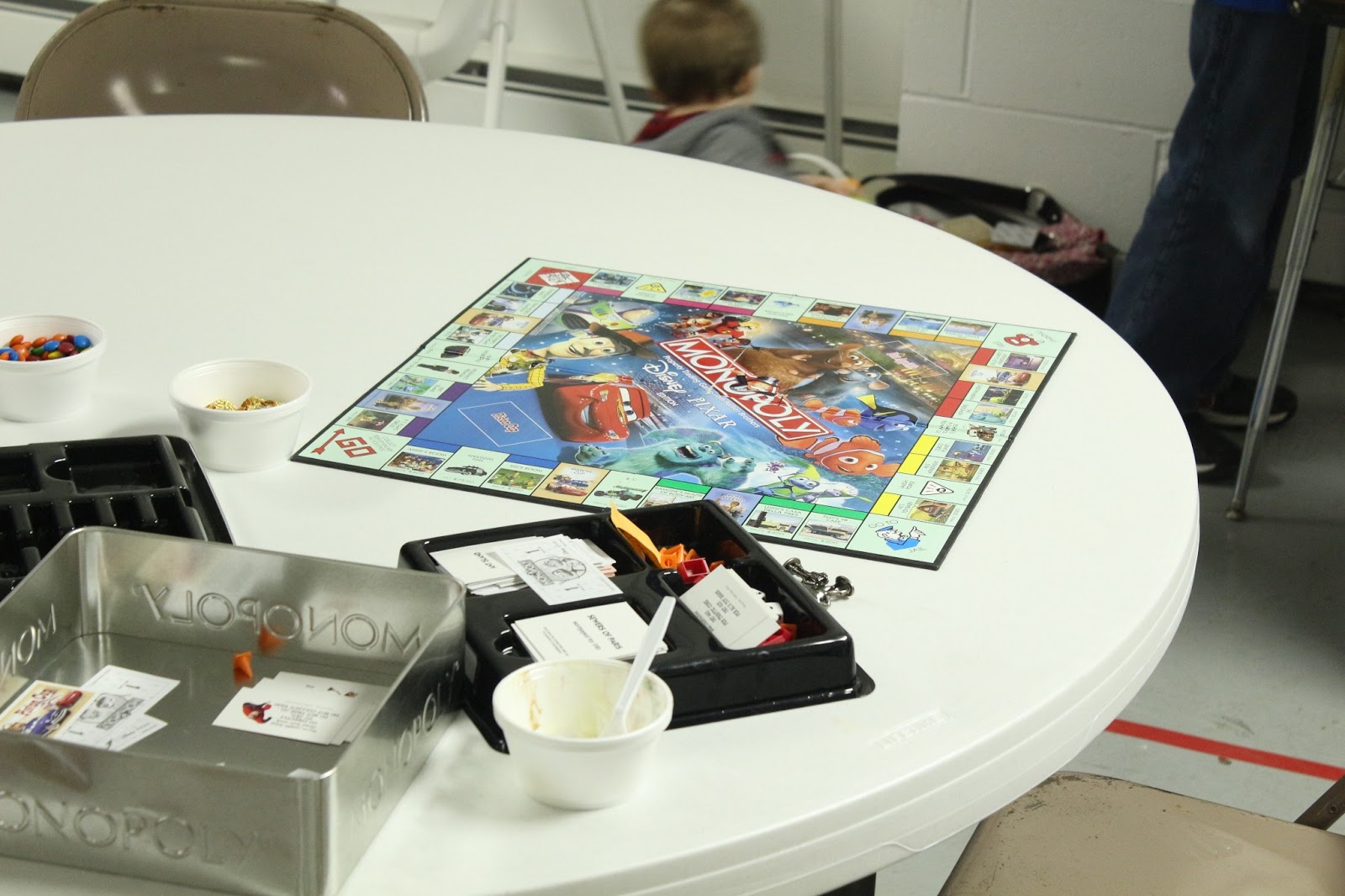 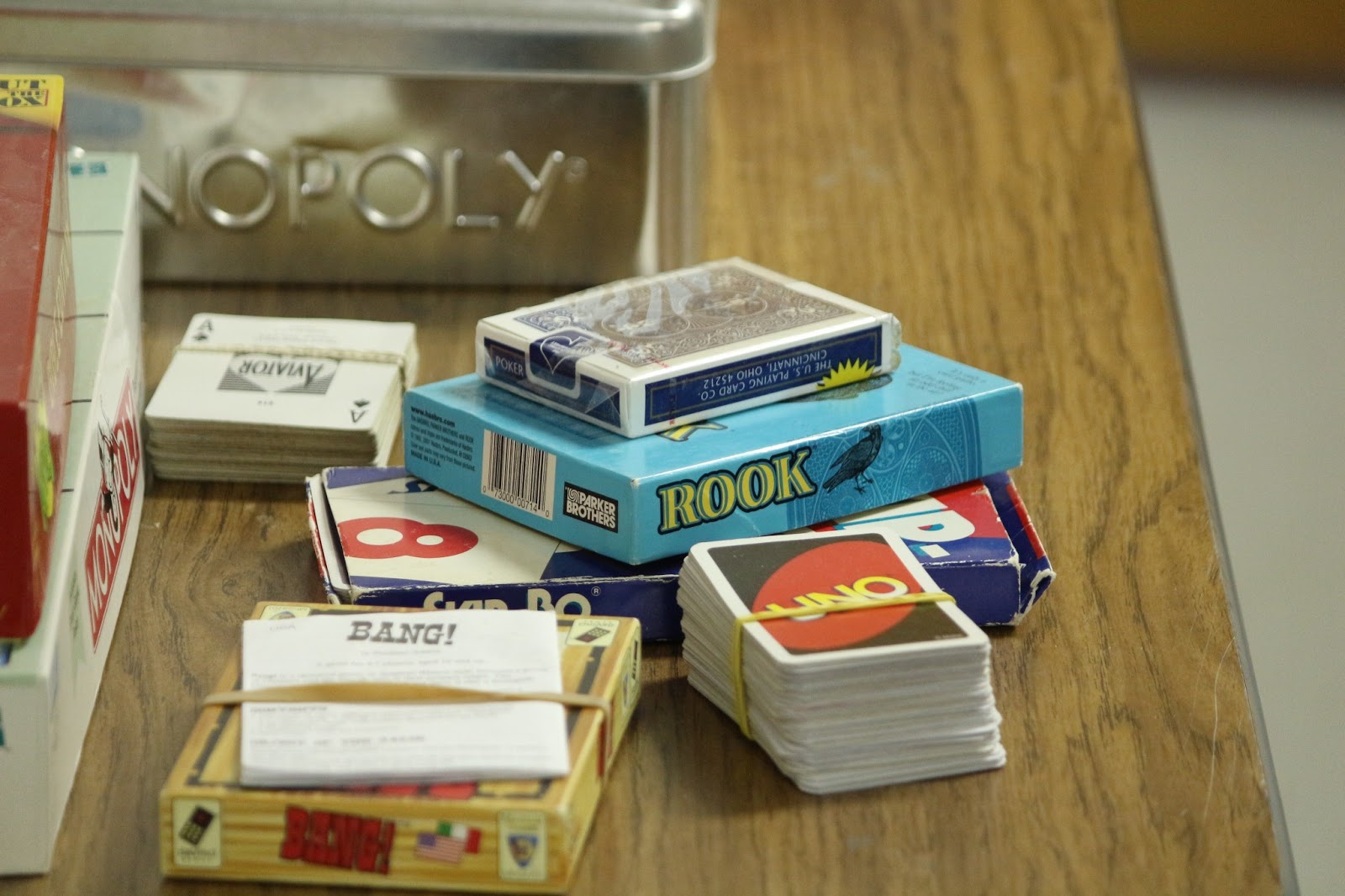 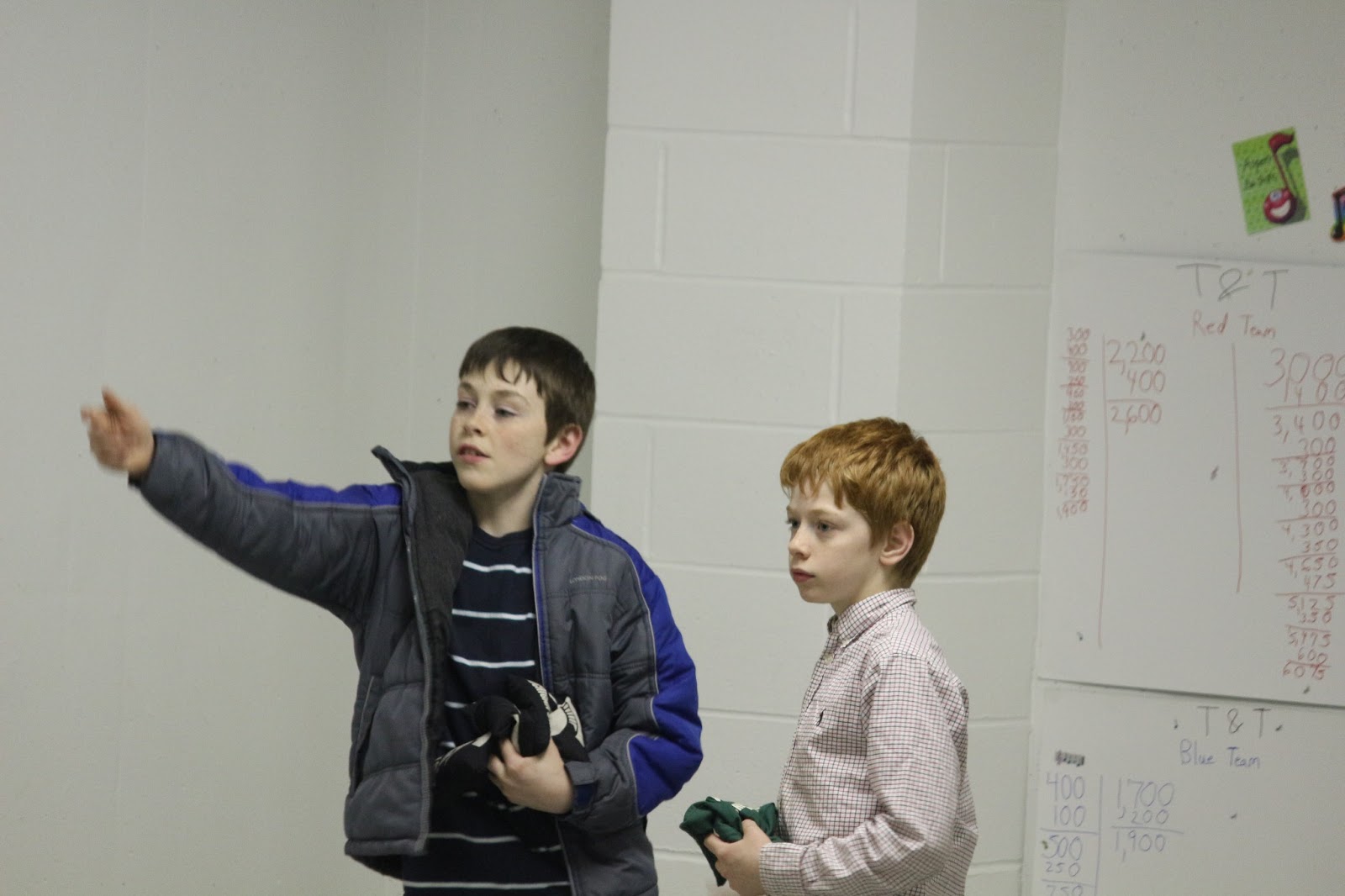 A lot of people had a lot of fun–and hurling those bean bags seemed to be a real favorite!

On the other side of the divider, protected from the legume projectiles there were a couple of more serious game players… 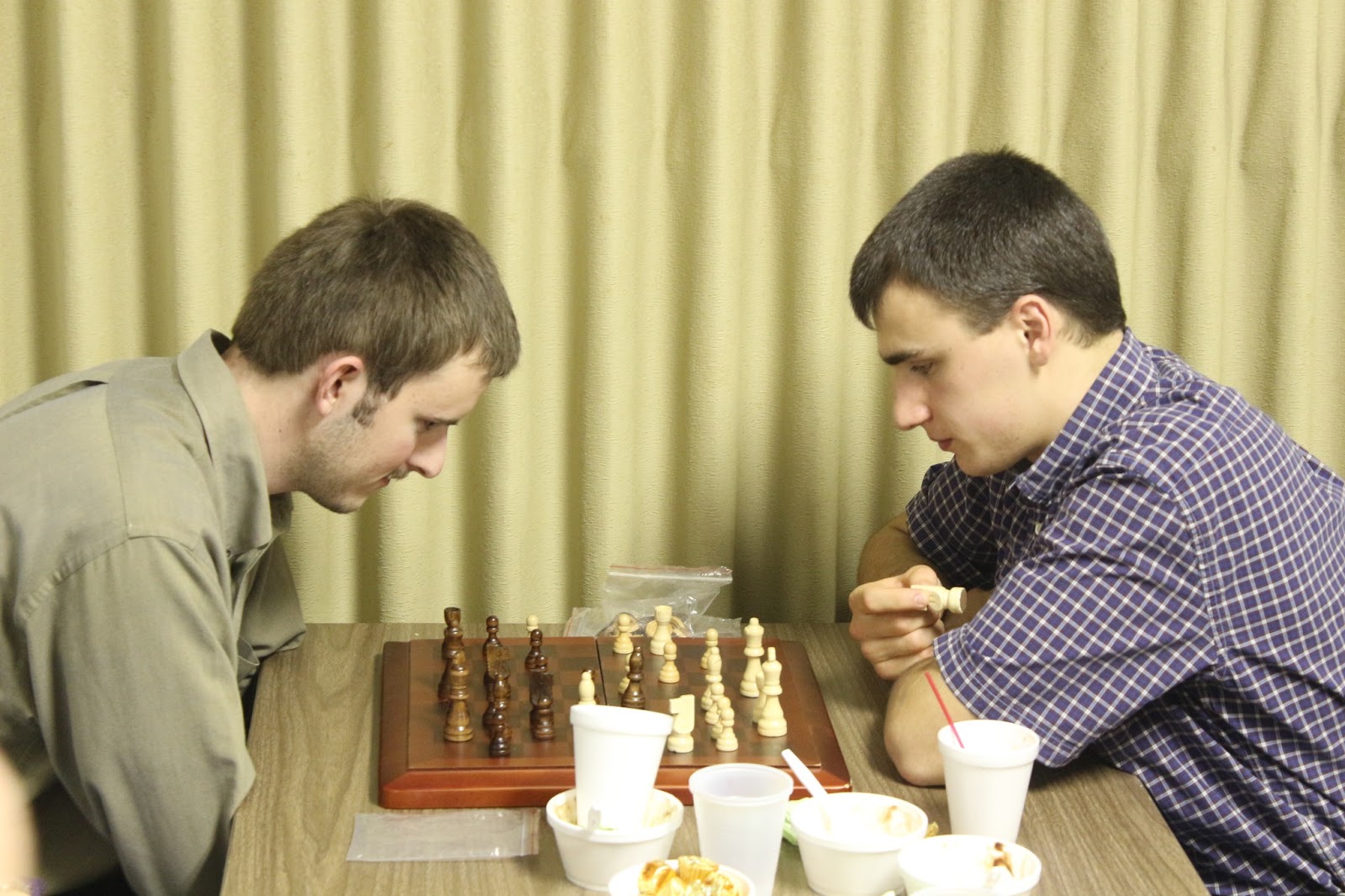 Another opportunity we took to have some food and extra fellowship at Ainger occurred between our special Easter morning celebrations.  It is our tradition to bring in breakfast to share between the early (Easter only) 8 am service and our usual 11 o’clock assembly.
The fare at these feasts is always fabulous–never lacking in quantity or quality! 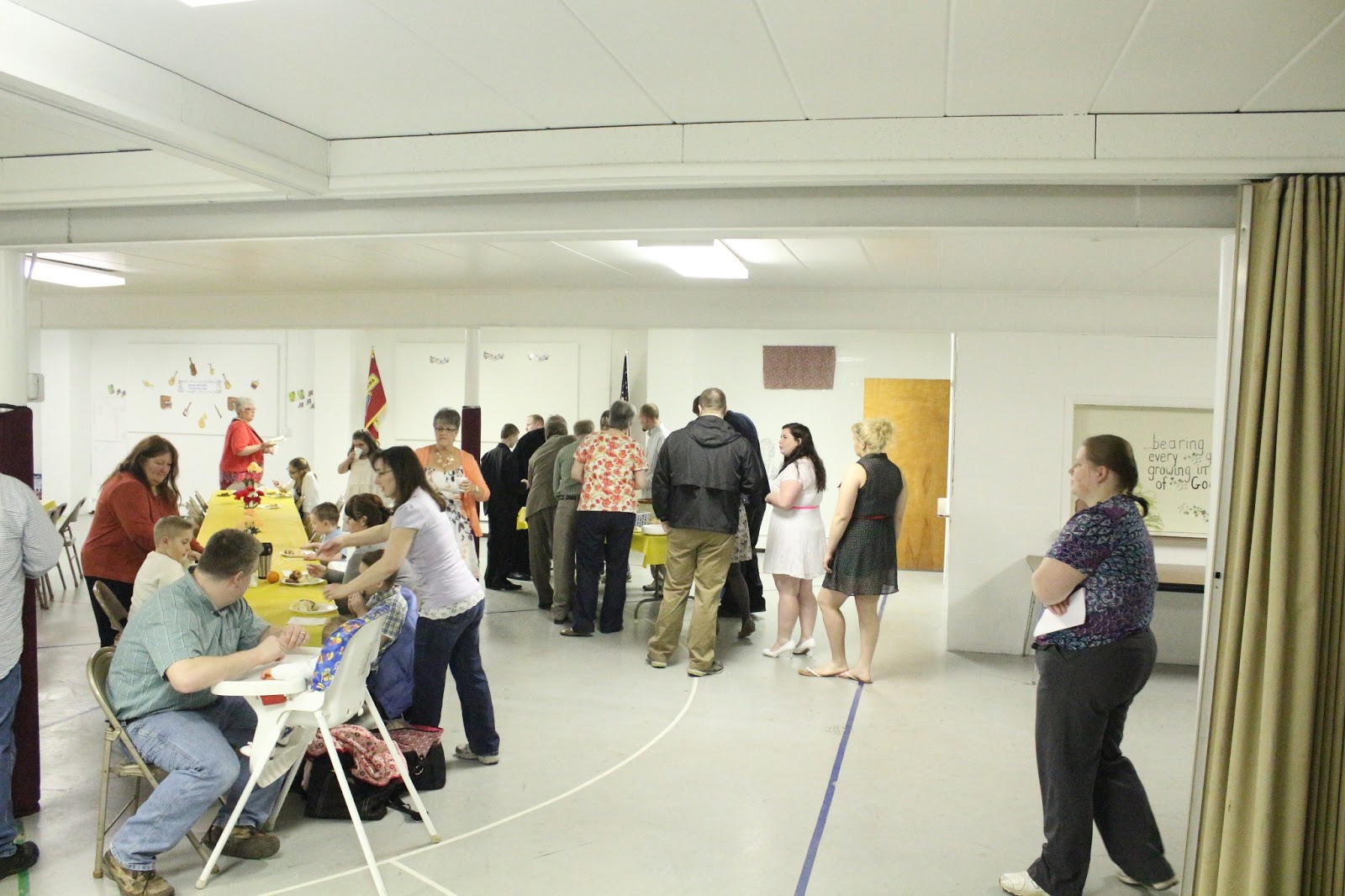 And what report on Resurrection Day would be complete without a few pictures of Lilies? 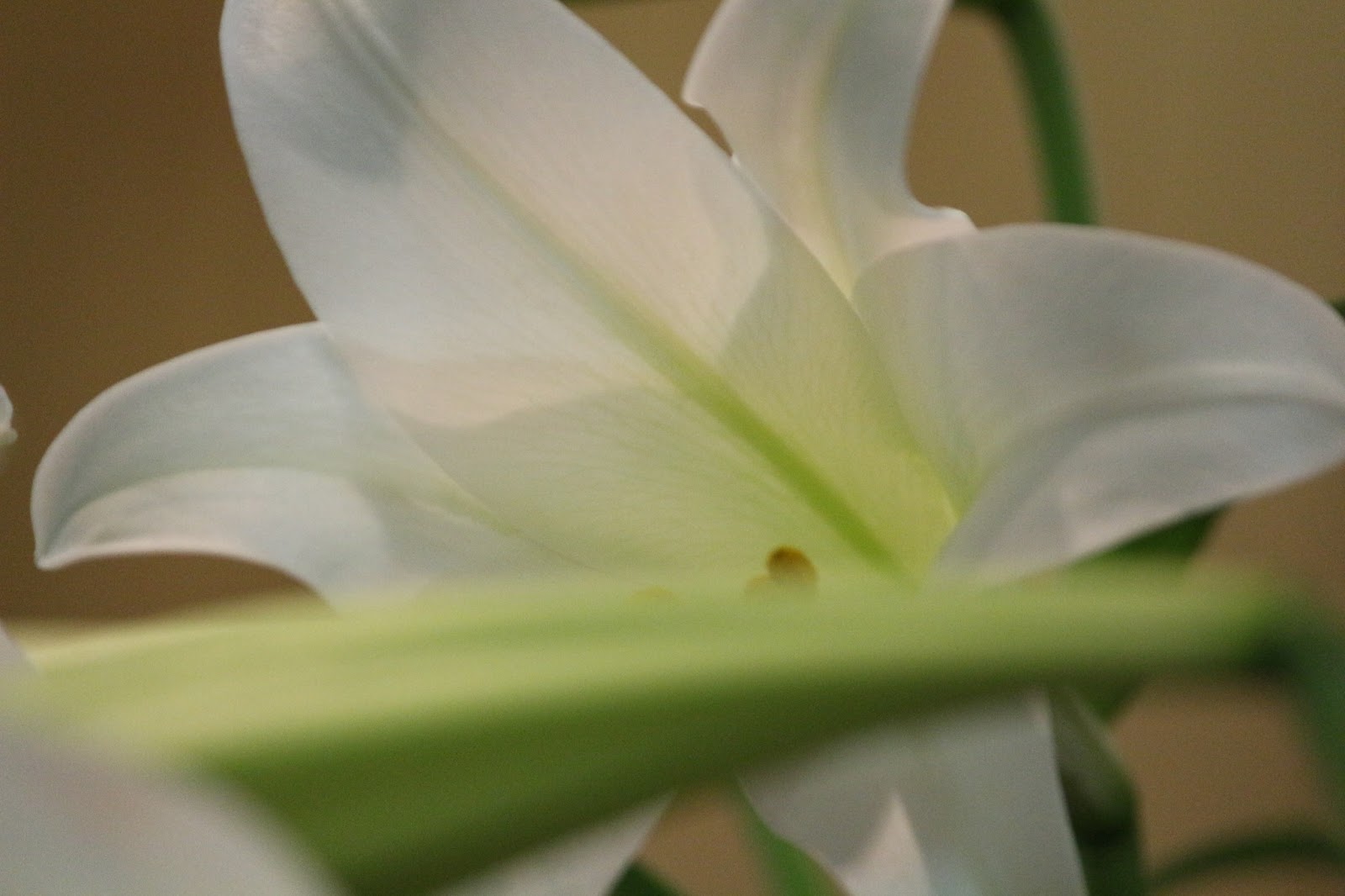 “With a glory in His bosom that transfigures you and me….. 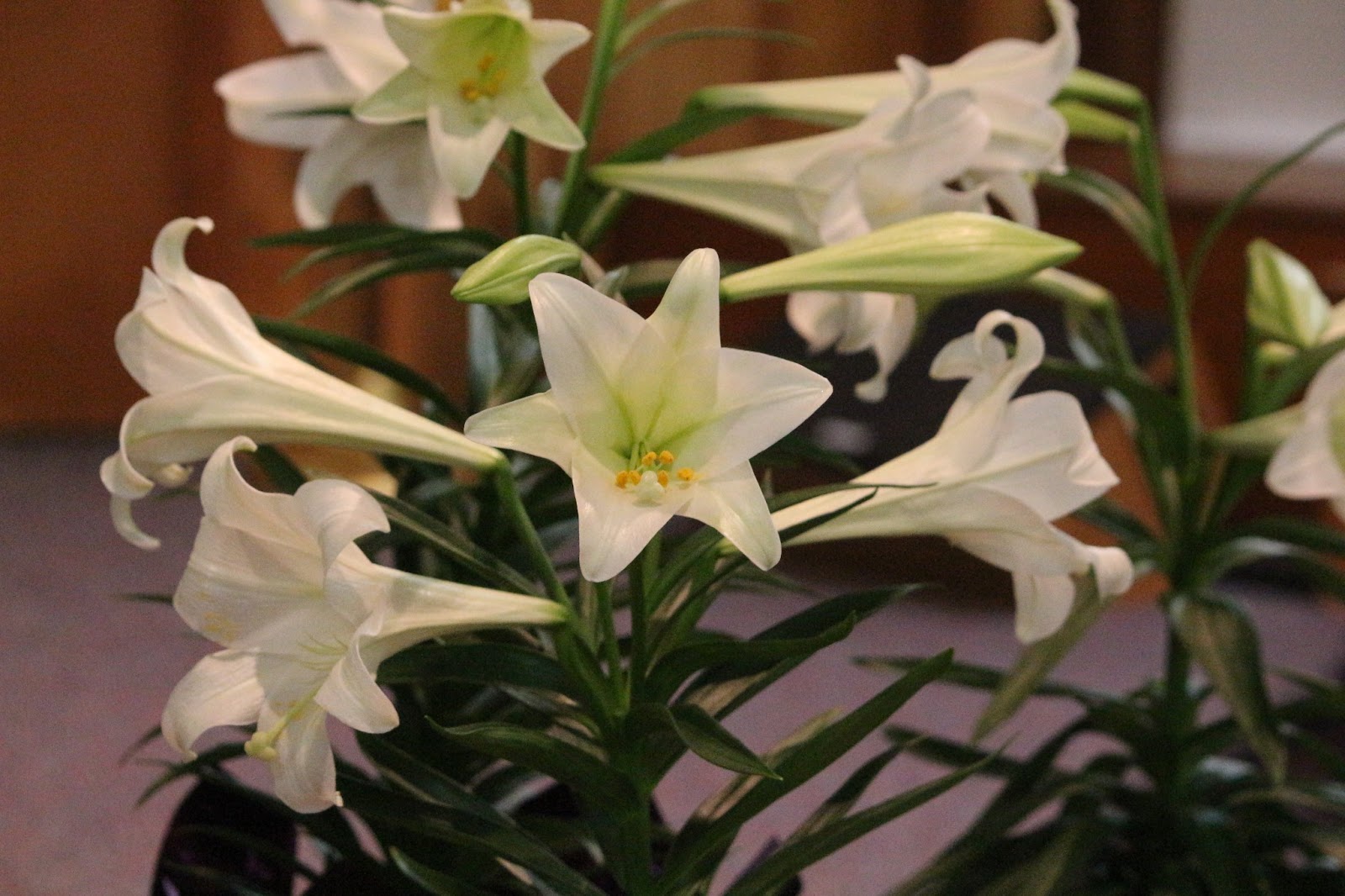 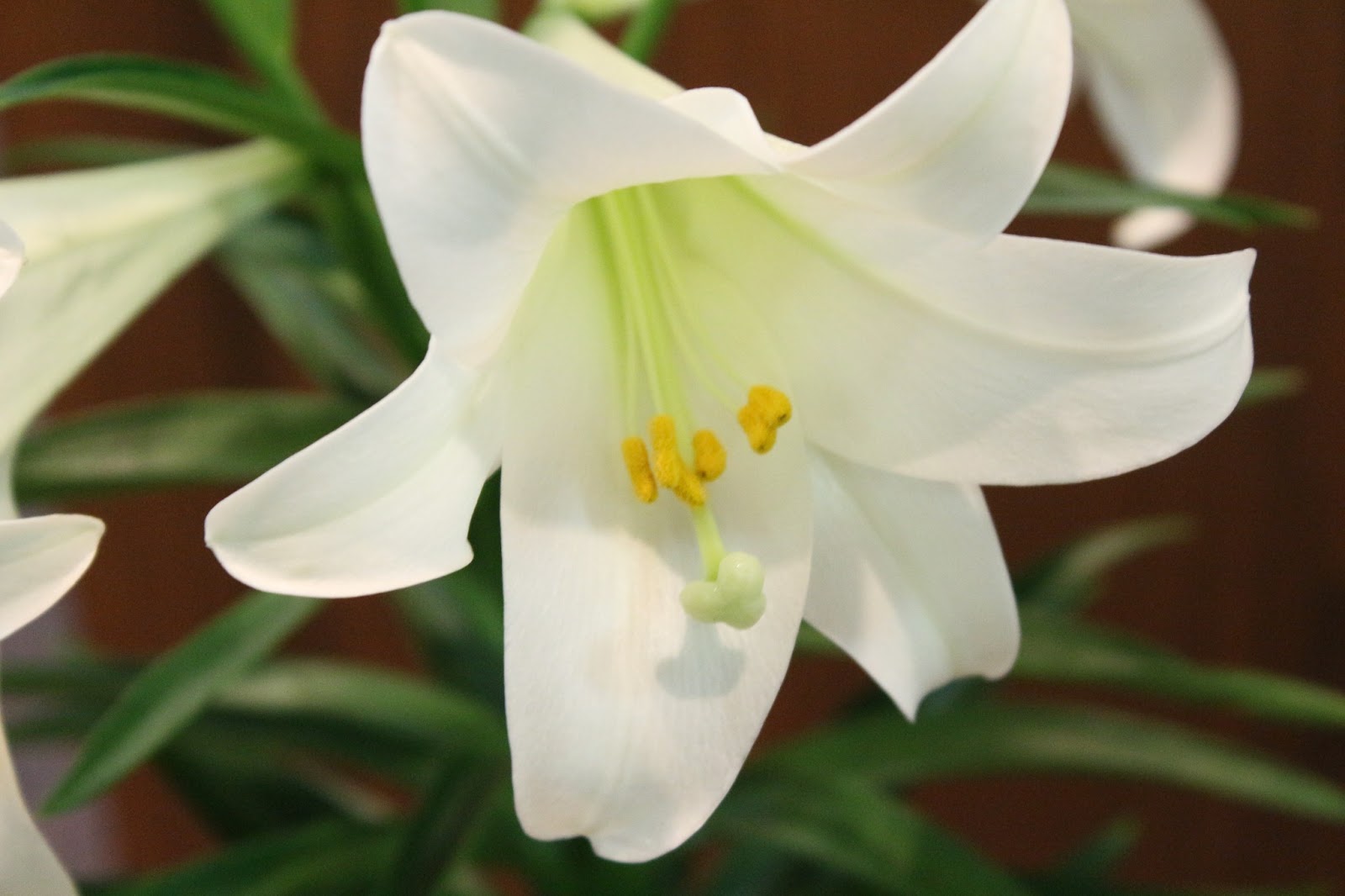 “For our God IS marching on!”

Praising God for His unconquerable, undiminishing love, displayed in that while we were still sinners Christ died for us! (Romans 5:8)

A Sunset over “Ice Fields Parkway” (Read On….)

This morning when we woke up to 15 degree temperatures we were wondering if there had ever been an Easter this cold! But I guess that this isn’t actually the earliest that Easter can be–March 22 is, given the right circumstances. It makes things interesting having the date of the Holy day determined by the equinox and the moon. You see Easter is the first Sunday after the first full moon after the first day of spring (the equinox). [that’s it for useful information today I think–the rest of this will just be scraps and oddments :-) ]

But on to the sunset (from last night). Allow me to set the scene: We were invaded. They came in overwhelming numbers. We were just getting used a life free from their intimidation and threats. A life of soft summer breezes and warm sunny days. Days filled with birdsong and laughter….And then they came. We had no escape. The land was again viciously thrust under their control. An icy cold grasp, usually unrelenting, and one that would choke the life out of the flora and fauna if given half a chance….

But before you get to feeling too sorry for us, I’ll tell you what happen….No it wasn’t grasshoppers, Asian lady beetles (although we have been besieged by them numerous times before–not fun!), or stray cats–it was snow flakes. (Of course you knew that from the last post, but a guy’s gotta take a little “poetic license” now and a again) (Oh, and I don’t really hate winter that much but I am ready for spring!) Thankfully, their days are numbered. And while this really is NOT a sunset over Ice Fields Parkway, here it is. (On an “oddment” note, we have been on the Ice Fields Parkway and, in my unprofessional opinion….it’s not that great. Now don’t get me wrong, it was “interesting,” but the actual Ice Fields are so far away. Now if we had been able to climb on them….) (Oh, yeah, the photo…coming right up…)

The following picture was taken looking West [obviously–it was a sunSET ;-) ] over the vast, endless snow pack that stretched to horizon, that wet, fluffy (or sloppy) white stuff that had taken back over the landscape 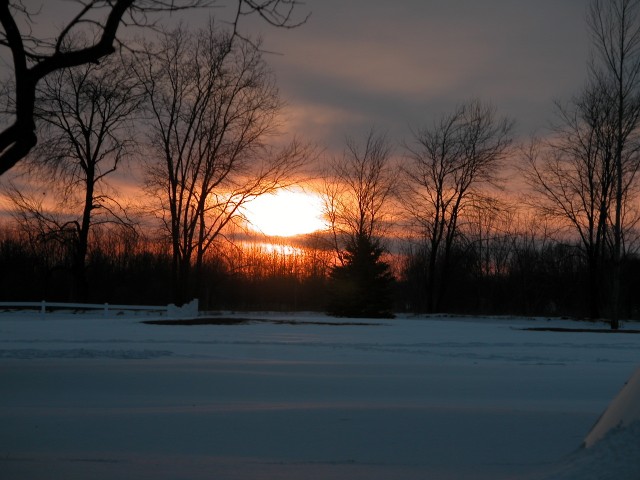 Even in this picture you can see that the sun had actually melted the tops of the hills off. However, that morning there was at least a good 8 to 10 inches everywhere and more in the drifts. It is a good packing snow, if it wasn’t going to melt off so fast I would be tempted to build another snow fort. Some time in January, or February (or was it December…hmmm….) we had one that covered about a third of the patio outside the back door….not the best place because we had to roll all of the snow balls up hill! And we’re not talking just little snow balls either, we’re talking at least three and a half feet tall and between a foot and a half to three feet thick.

Our favorite fort was not even built in Michigan though, it was in a state to the South West…New Mexico! We were on vacation (either en-route to the Grand Cannon or on our way home, I forget) and staying in Glorietta at the Southern Baptist Convention Center of the same name (great place to stay by the way, they have sort of like apartment with a couple of bedrooms and a kitchen all for rent at a very reasonable rate (at least when we were there) they have one in Western North Carolina too–Ridgecrest) any way we were staying up in the mountains, and the night of the day after we arrived and got unpacked (in our short sleeve shirts) it snowed. It did not snow a little. It snowed a lot! It started snowing Sunday night, by Monday morning we had got roughly 18 inches, by Tuesday morning 2 feet! It was great! The best part of the whole trip! We had (optimistically) taken our winter coats and the snow shoes–Praise the Lord (PTL) and good idea Mom!! Did I mention that it was the middle of March and the danger of snow was basically past? Yes I do believe God had his hand it that….(as some would say “meddling again.” Nice when He does that isn’t it?) Let’s see where was I….Oh yes the snow fort. We met the people staying next door, a pastor and his wife and two girls, rounding out their vacation before going back to Ok city to finish moving, and any way the girls built a little mound-up-a-bit-of-snow-and-call-it-a-fort fort, and we thought it would be fun to show them what a Michigan fort looked like. So we rolled up a bunch of two foot snow ball and stacked them all up nicely–even built in seats and a “fridge” to hold watter bottles! But the best part of that fort was the snow was so deep it didn’t take much to get a really big snow ball, AND there was a lovely hill right handy so we could roll the ball down hill. That was probably our biggest and best fort ever. Even Mom helped build it. And I bet it melted a couple of days later. (we had to leave the next day, I think it was to go home…)

Dad and I also got to go snow shoeing up the mountain in the snow. We were following some sort of trail–I think! It followed and kept crossing a beautiful mountain stream, the pines were laden with piles of powder and the woods were silent except for the rushing brook. It was great.
Another thing I really liked about staying there was the hot lunches. That may sound strange, but I liked it…all the soup and sandwiches…the…the…um…there must have been something else, but now I don’t remember. Maybe it wasn’t that great after all :-) (I’m sure it was)

Oh before I forget here is another interesting shot of the same sunset: 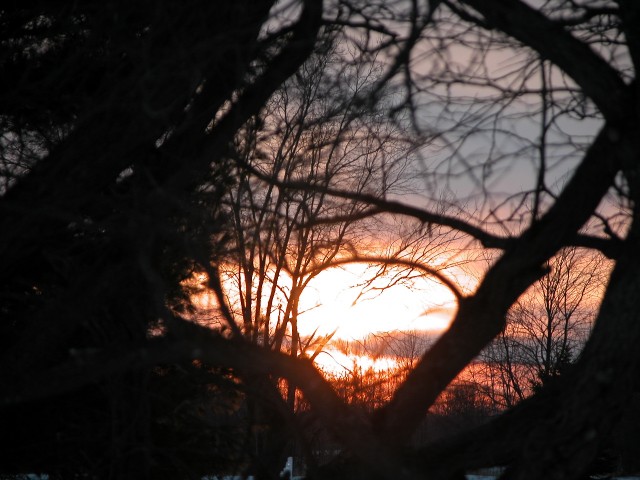 The snow started settling shortly after it fell, and by today we’re down to about 3 to 6 inches. The plowed/shoveled areas are melted off and quite dry. The Robins are glad for someplace without snow!

On a different subject….

This morning at church we had an early service at eight, breakfast at nine, Sunday school and ten, and the regular service (not a meeting–I hate meetings!) at eleven. A rather full morning. And since there would be no food for breakfast if we all didn’t bring any….I’m sure you get the point. Mom was able to prepare her offerings yesterday so we didn’t have to think about that this morning, PTL. She usually makes Empty Tomb rolls, and this year was no exception. These are special rolls that are, can you guess?, that’s right–empty! For any one interested in the recipe, here it is:
Homemade Bread dough (None out there would even think of using…horror of all horrors…store bought now would they?)
Marshmallows (We don’t make our own of these for some reason…perhaps it’s the air puffing that’s the hard part)
First preheat your oven to a low temp to raise the bread. (or don’t preheat and just turn it on when you get the rolls in there!) Next take a piece of dough a little bigger than a golf ball (for you fellow poor deprived non-golfers, that’s about a two inch lump. We know about golf balls due to having a golf course practically in our back yard (used to be a corn field….sigh. I’ve heard it plays like it’s still a corn field–maybe one day again)) take the dough and shape it around a marshmallow. Make sure you seal it up really well or all of the sticky marshmallow will leak out on to your greased baking sheet. (I did mention that part didn’t I? Grease them well, or you may be sorry!) Once you have about three or four hundred dozen of these made (or how ever many you care to make) and placed on your greased cookie sheet, place them in your warm (but not hot–you don’t want to melt the marshmallow yet) oven to rise. Once they have risen to the appropriate size (roughly doubled or so) crank the temp up to about 350 degrees and bake them for about 20 minutes (or till they’re done–if you leave ’em in there too long the smoke alarm will go off and that batch will have to go to the chickens, or pigs, or goats or something–maybe just cut the bottom off) When you cut the perfectly browned product in half there will be a hole in the middle–just like the empty grave Easter morning. So there you have it a delicious breakfast treat, kind of sugary (somehow sugar seems to be the main ingredient in marshmallows. You’d never guess from how sweet they taste [insert sarcasm into that last remark if you haven’t already]), but good. And if you actually can follow that recipe amongst all the commentary you deserve a prize! (please note I did NOT say that you would get one, just that you deserved one!) Have fun baking!

At least with two services this morning there are none to night–kind of nice to just stay home and rest once and awhile.

The hoop house is doing fairly well. The snow load on the West side turned it into and A frame for awhile but I think I have it straighten out again. The grass is really greening up in there. Inside of the Hoop Coop, a.k.a. chicken tractor, which is inside of the hoop house, the grass is up tall enough to mow already! If I ever get some chicken to the point to where they live long enough to go out side, they will really like it I imagine. The new batch of chick is due tomorrow morning–bright and early I’m sure–the last time the Post Office called me at 6:11am. I got rid of all the old bedding and disinfected the feeders/waterers so hopefully this batch will do a lot better than the last batch. (100% mortality in about two weeks!) We will see.

The plants I have growing upstairs are doing fairly well. I am never sure how much to water. I need to plant some more stuff too–peppers, redo some tomatoes, and start some butterchrunch head lettuce. Any advice on starting seeds (or chicks for that matter) would be appreciated….I’ve never done this stuff before and am just about the definition of a bumbling amature :-)

Well that’s all for now,