There’s nothing to do…nothing at all…so I guess I’ll blog.

I’ve been sick for about 5 days. I’ve had my fill of TV, books on tape, and blankly staring at my computer monitor. With sleeping, that’s about all I’ve been doing of late. Oddly, I haven’t even been hungry enough to eat much. But I’m finally feeling better.

Mom has a new piano student that started today, so she had me clean the family room. Since it is clean (mostly, and won’t be for long) I thought I’d show y’all a picture (don’t expect images of the rest of the house any time soon :-)…) 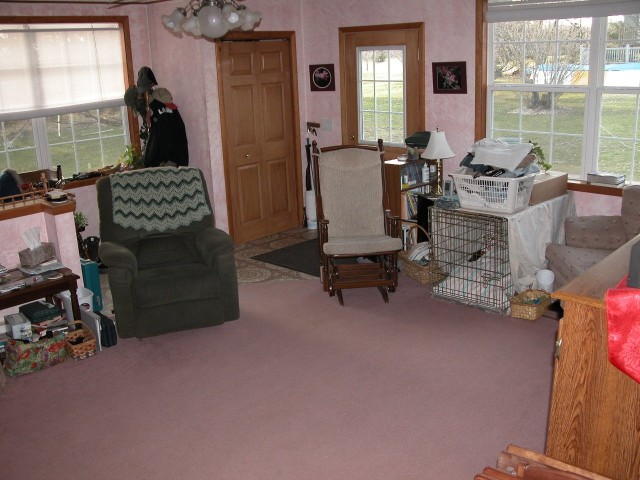 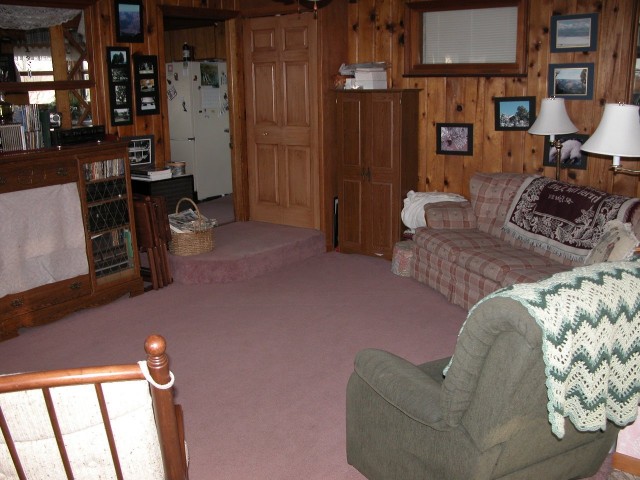 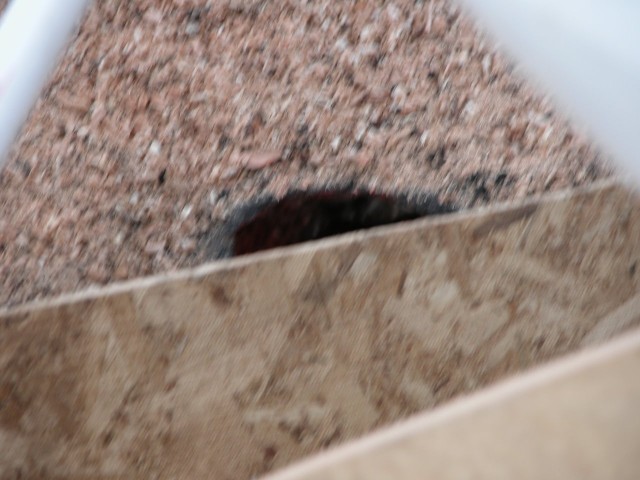 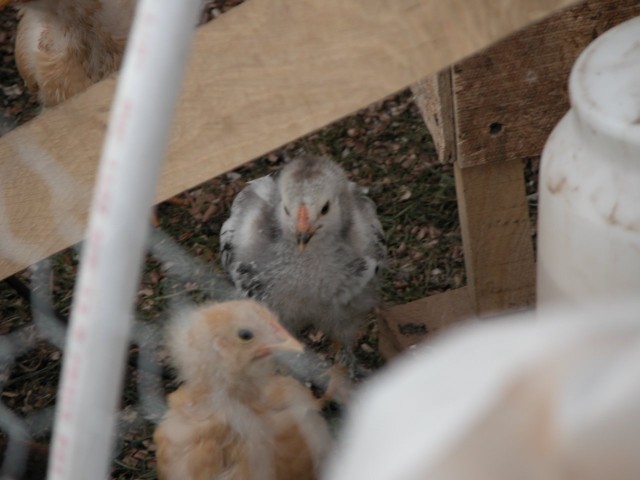 Apparently, the heat lamp bulb was touching the plywood on the top, and started the fire.

Everything has been greening up around here: 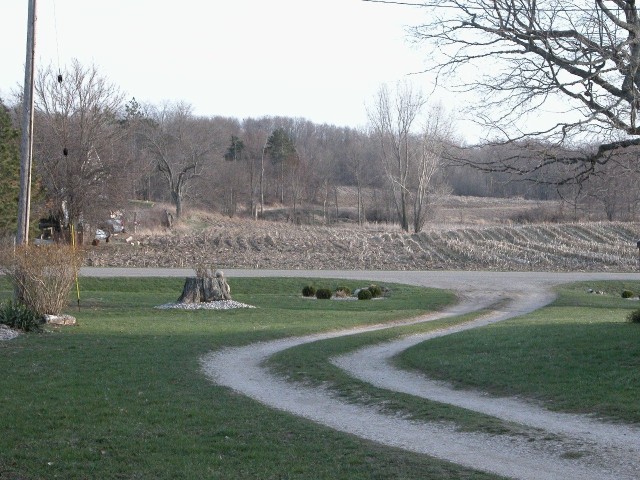 And with the temperatures around 70, it definitely feels like spring.

Matthew has been working over at the Williams this week, who have 500 ewes lambing, and been gone from early morning until late night. Baxter misses him dreadfully, and hardly settles down long enough to pick at his sore (from the neighbor dog, but long story). He doesn’t even know about the fire yet.

That’s about all I can think of to write about, without getting into stuff like politics (ZZZzzz…).

To all, a good night.

We had a very weird weather day today. I woke up to gray, but about nine the sun came out. Then this afternoon it has switched back and forth between sunshine, rain and a little hail, and just cloudy.

This morning I thew the last of the wood on the place (except for the blocks holding down the hoop-house) into the furnace, and since it’s supposed to be rather cold tomorrow (snow predicted, though if we do get any, I’m pretty sure it won’t stick) I thought it might be nice to have a little more before then….So I called Mr. Joe (the fellow from church who I cut wood with, and who also just and surgery on his foot last Friday) to see if he would be able to at least come with me and watch (for safety’s sake we prefer to have two people around if we’re doing much cutting) while I cut up some wood. Being the irrepressible, generous, strong type he is (he’s also really good on crutches), he said that he’d put the new bar on his saw, and to come on over (he mentioned that the doc said he doesn’t have to use the crutches all the time any more). So after I grabbed a snack and collected the extra layers I might need if it did start raining (it was about 68 degrees (20 C) at the time) and put the new bar and chain on my saw, I hooked on to the wood splitter and took off. I made it out of the drive way, down our road onto the busy road right by the freeway overpass/exit ramps and the wheel on the splitter locked up! Black skid marks on the pavement and squealing tires–the works. So I pulled off on the shoulder, and grabbed a pry bar to lift the axle, so I could spin the wheel and try to free it up. Once the tire was spinning freely, I jumped back in the truck and took off again. I made it another mile and a half (and two turns) before the wheel locked up again! It was locked up worse that time, but I managed to get worked free and limped it the last two miles (3.2 km) to Mr. Joe’s place. As you may have guessed the bearing was shot. So we had to fool with that a while, and then I headed into town to get new bearings.

Now while I was driving over to Mr. Joe’s and while we were working on getting the wheel bearings off, it was sunny with a lovely breeze. The peepers were singing away merrily, white puffy clouds were off in the distance, and it was plenty warm to be working in a short sleeved shirt. Then just before I left for town, there was a huge storm system practically right over us. Just came up out of nowhere. Last night we got about an inch and a half (3.5 cm) of rain, and today on the way to town it must have been raining at the rate of about an inch an hour! That didn’t last long though, by the time I got back about 25 min. later it had quit. And it never rained as hard at Mr. Joe’s farm as it had in town. So we put the new bearings in between a few more little showers, and took stock of the situation. About that time it started raining hard again–so we went inside. After a little while, all of a sudden it was sunny. The trees weren’t even dripping. If it weren’t for the puddles you’d never have known it had just been pouring. Quite strange.

So we though we could start cutting then, but another storm blew in and so we gave up and I came home. It rained on the way home, but then shortly there after it quit and was very nice and sunny again. And hasn’t rained since, I don’t think!

There’s Michigan weather for you. Overall it was a very nice day, except it kept raining off and on. When it wasn’t raining the sun generally came out. Weird weather. And no wood. We’ll have to rely on the oil furnace a little bit. Oh well, in three years we’ve only used about 3/8 of a tank, so we’re not doing too bad. I guess we’ll try again tomorrow. (once again in the rain and snow!)

P.S. I’ve got to get another photo of that rhubarb–you can almost see it grow. It must be a foot and a half high already.

A Short Post (there’s a first time for everything!)

Well, just have time and energy for a short post tonight…if I try really hard maybe I can actually keep it short!

The weather has been pretty typical for April in this neck of the woods: a mix of sun and rain, and temps pretty steady in the mid 50’s (12-13 C) although one day when the sun was out it got up to nearly 70! (21 C) They say it’s supposed to get cooler this weekend and possibly snow…but y’all know the weather service….

There are more and more signs of spring all the time. The crocuses (spring flowers–not sure if that’s the proper spelling) are finally blooming, and the daffodils are growing quite a bit too–no flowers yet though. Also the ‘spring peepers’ (little frogs that have really big voices!) have been singing away merrily for a week or so, probably once the water in the swamps warmed up.

The chicks are still doing fine and growing to beat the band…hard to believe they’re only 2 1/2 weeks old. Most of them now have all their little wing feathers and quite a start on their tails. Fluttering to the top of the brooder no longer poses any problem–I’m glad I got the chicken wire on when I did!

The tomatoes are flourishing upstairs…I’ve had to raise the lights several times the past week. I could probably move them out to the hoop-house, only it’s not dug up. And before I can dig it up I have to move the chicks out. And before I can move the chicks out it has to warm up enough….So for now the plants are still upstairs. The lettuce is also doing well. I actually planted some leaf lettuce and radishes out side last Saturday–pretty exciting ;-) I should get another picture of the rhubarb, its really taking off.

And finally, you may have noticed that we have different music at different times….That’s because Jonathan made some random number generator that picks what music player comes up–so if you don’t like the music just refresh the page and it will probably be different. (although I can never seem to get the one that has the bluegrass music that I like pretty well) He also found some new songs to put on the one player….the one song entitled “city on a hill” (or something like that) has pretty good lyrics but I wish it was something different that a “City!” Make me a lamp on a stand, or maybe a barn on a hill, but I think that the agrarian consensus is that cities are the antithesis of the ideal lifestyle. Oh, well quite good other than that. He also found some other neat ones…. so come by and take a listen…

I think that (had better be) is all for tonight,