And now back to our regularly scheduled programming:

Issued by The National Weather Service
Grand Rapids, MI
Thu, Jan 31, 2013, 9:11 AM EST
LAKE EFFECT SNOW ADVISORY IN EFFECT UNTIL 1 PM EST FRIDAY…
THE NATIONAL WEATHER SERVICE IN GRAND RAPIDS HAS ISSUED A LAKE EFFECT SNOW ADVISORY… WHICH IS IN EFFECT UNTIL 1 PM EST FRIDAY.
HAZARDOUS WEATHER…
* POTENTIAL FOR 2 TO 5 INCHES OF TOTAL SNOW THROUGH 1 PM FRIDAY.
* WEST WINDS GUSTING TO 30 MPH WILL CREATE AREAS OF BLOWING SNOW.
* WIND CHILL TEMPERATURES AS COLD AS 10 BELOW ZERO TONIGHT AND FRIDAY NIGHT. 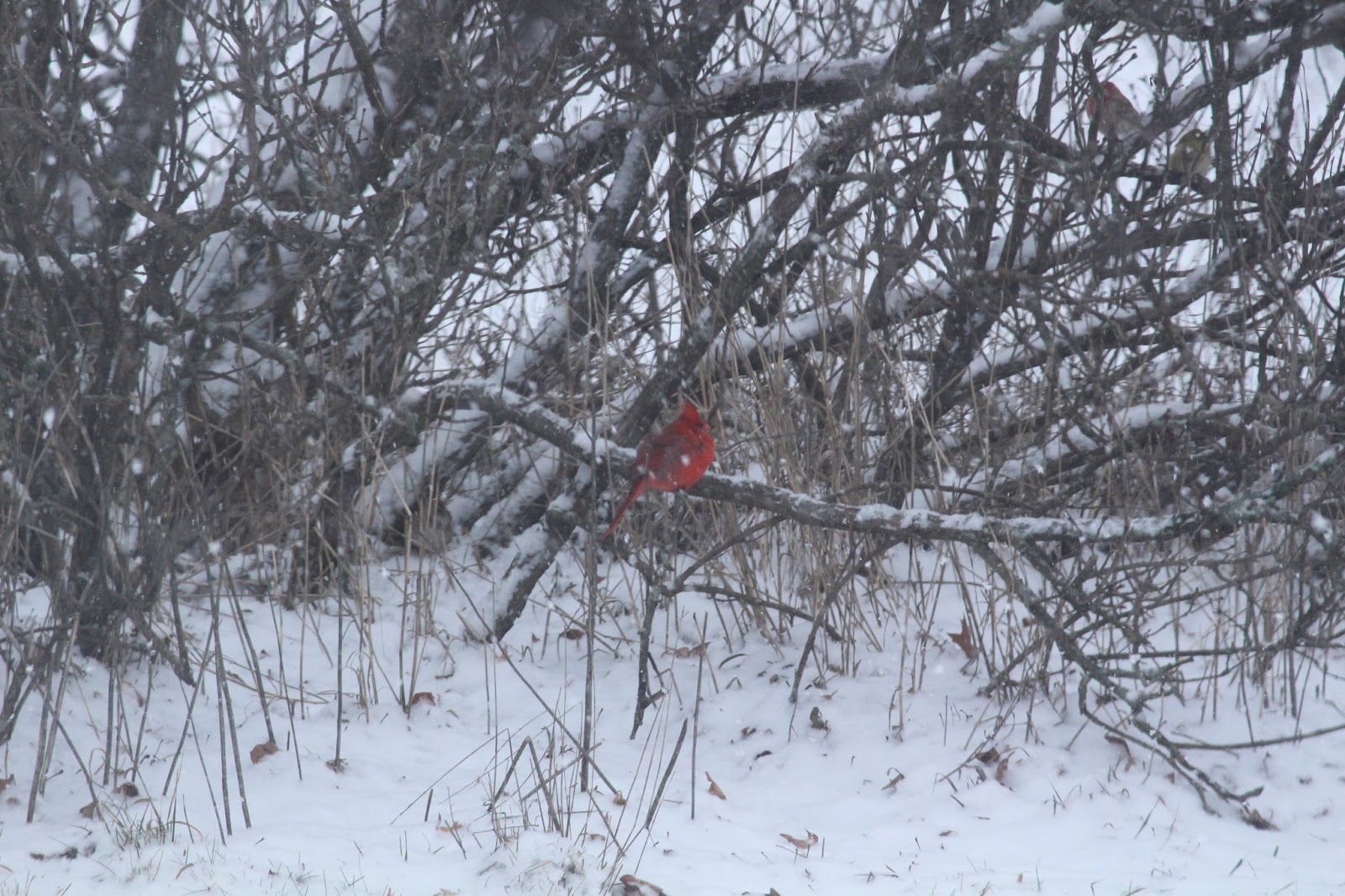 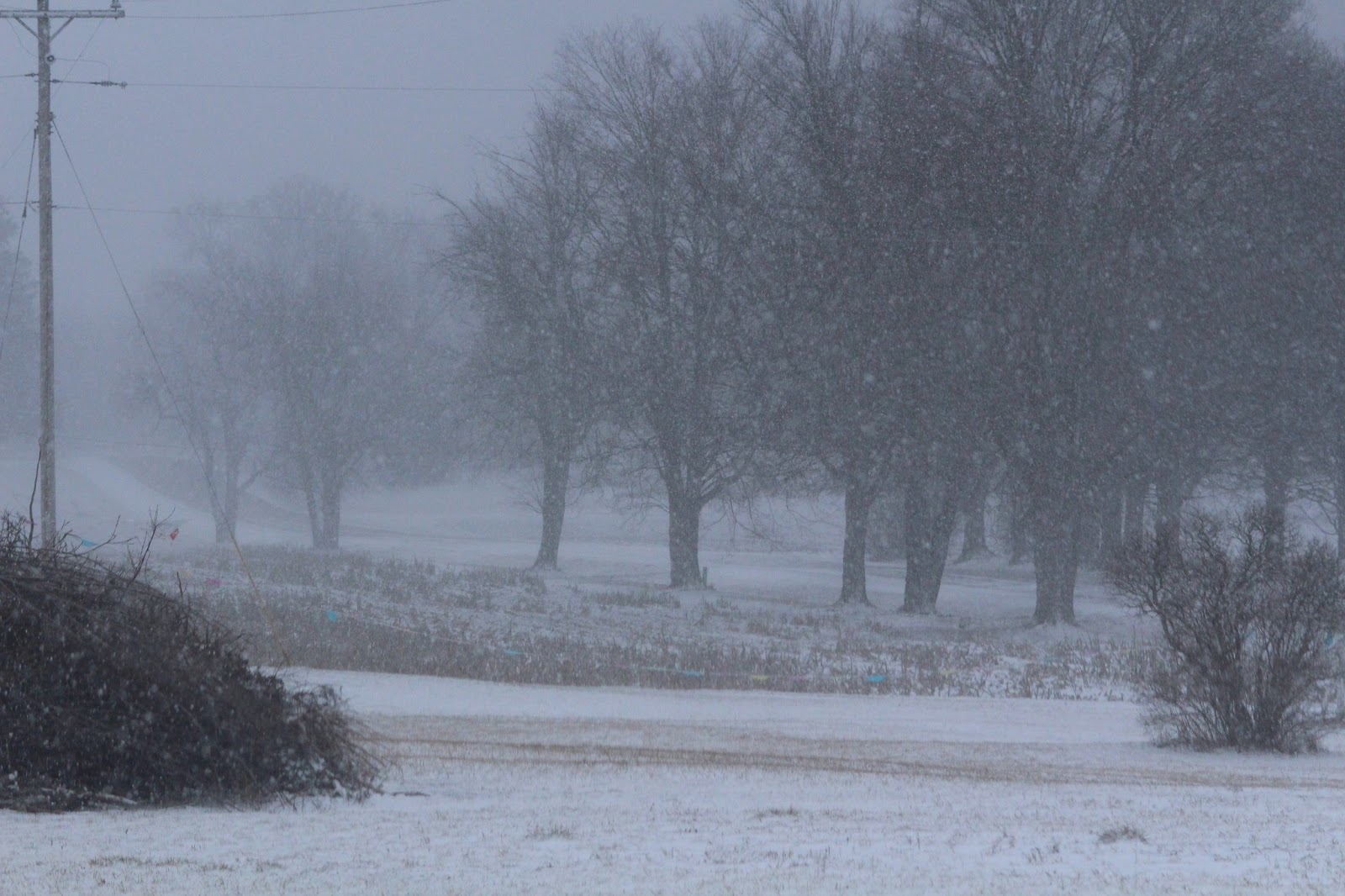 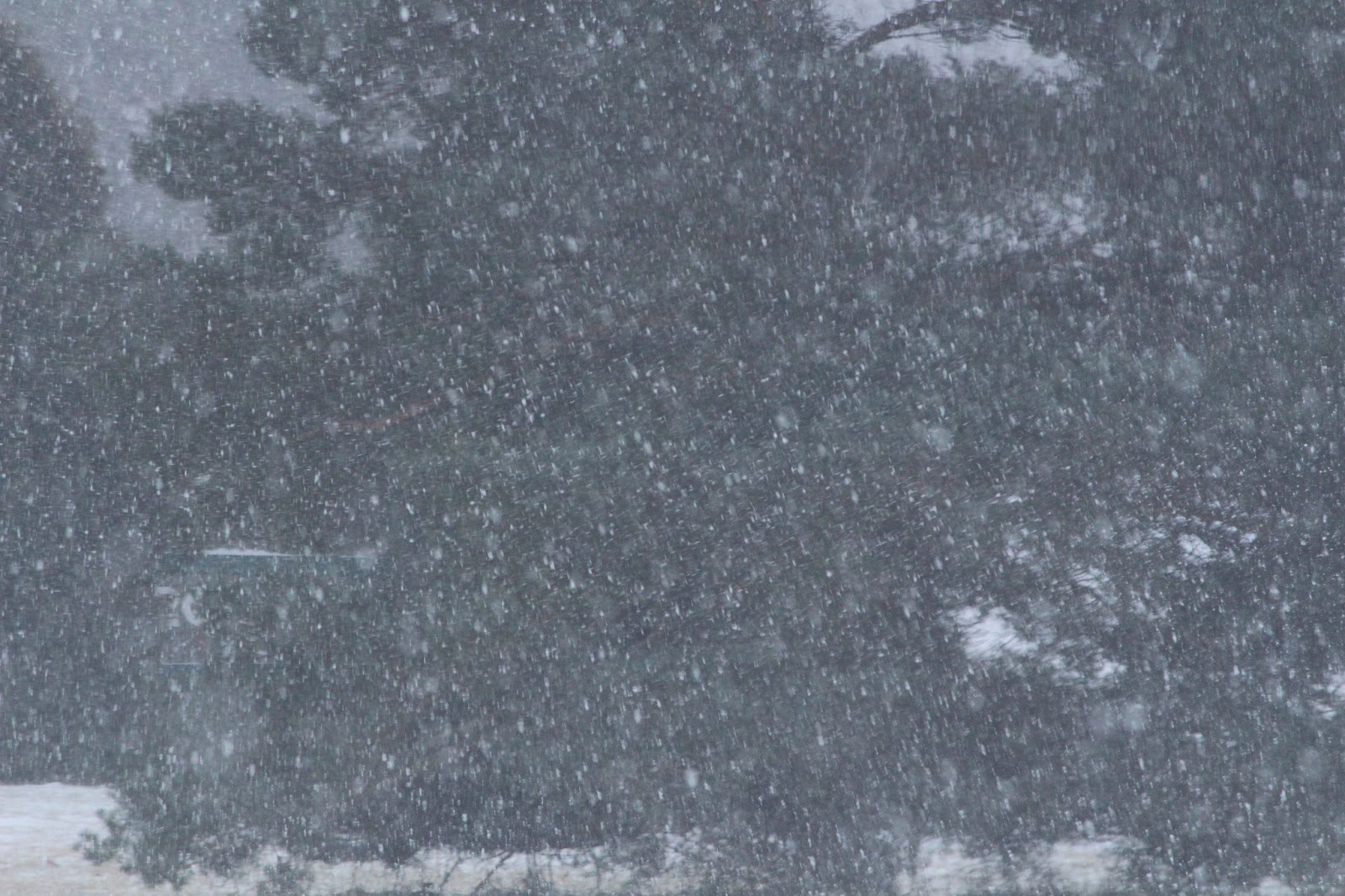 We know to expect it–the sloppy, sometimes dangerously icy, roads; the MUD, the rain and the fog….  But usually we only get it once per January!  This year we’ve had two January thaws: one in the first third of the month and now this one that started Sunday night. 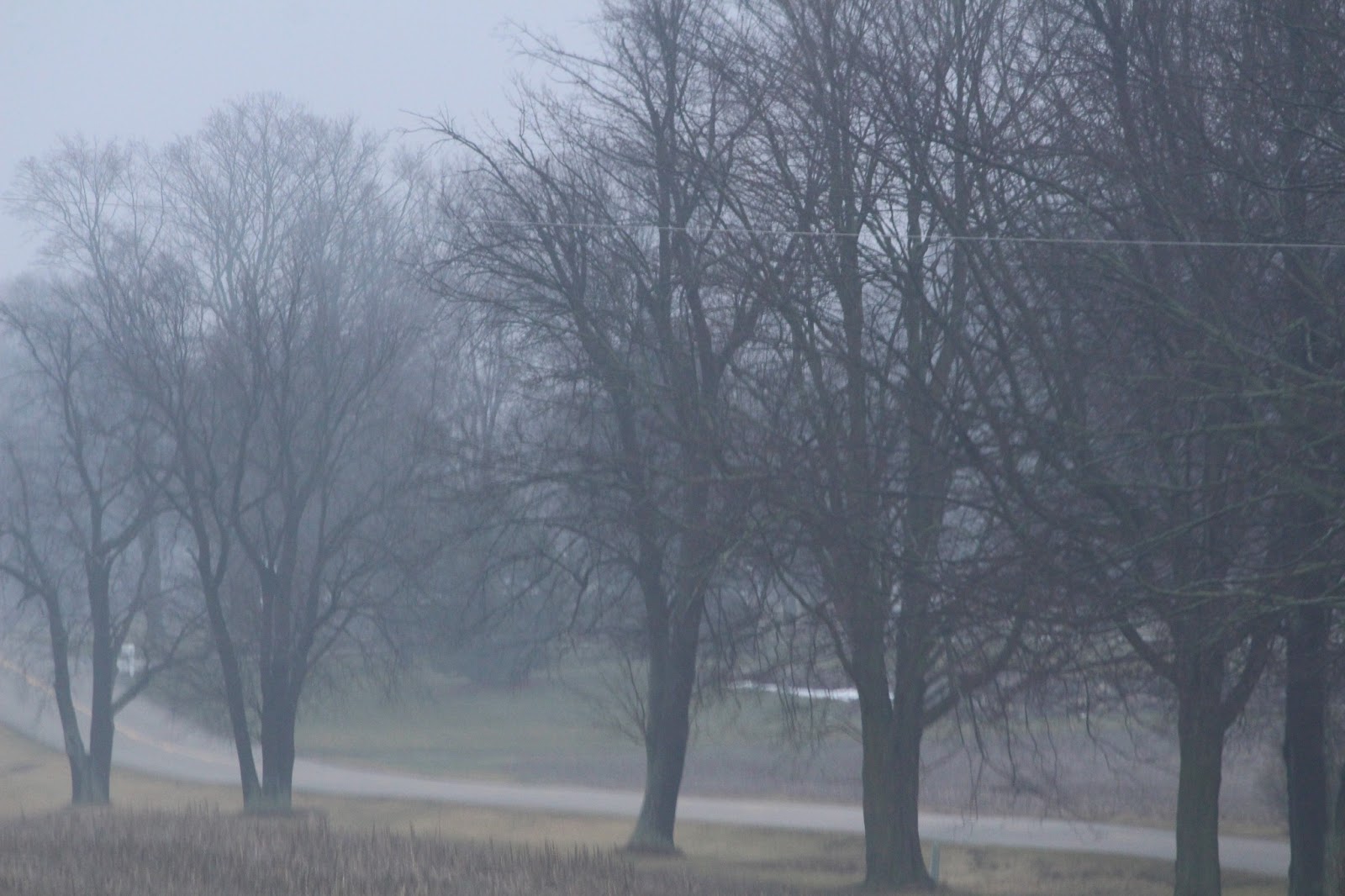 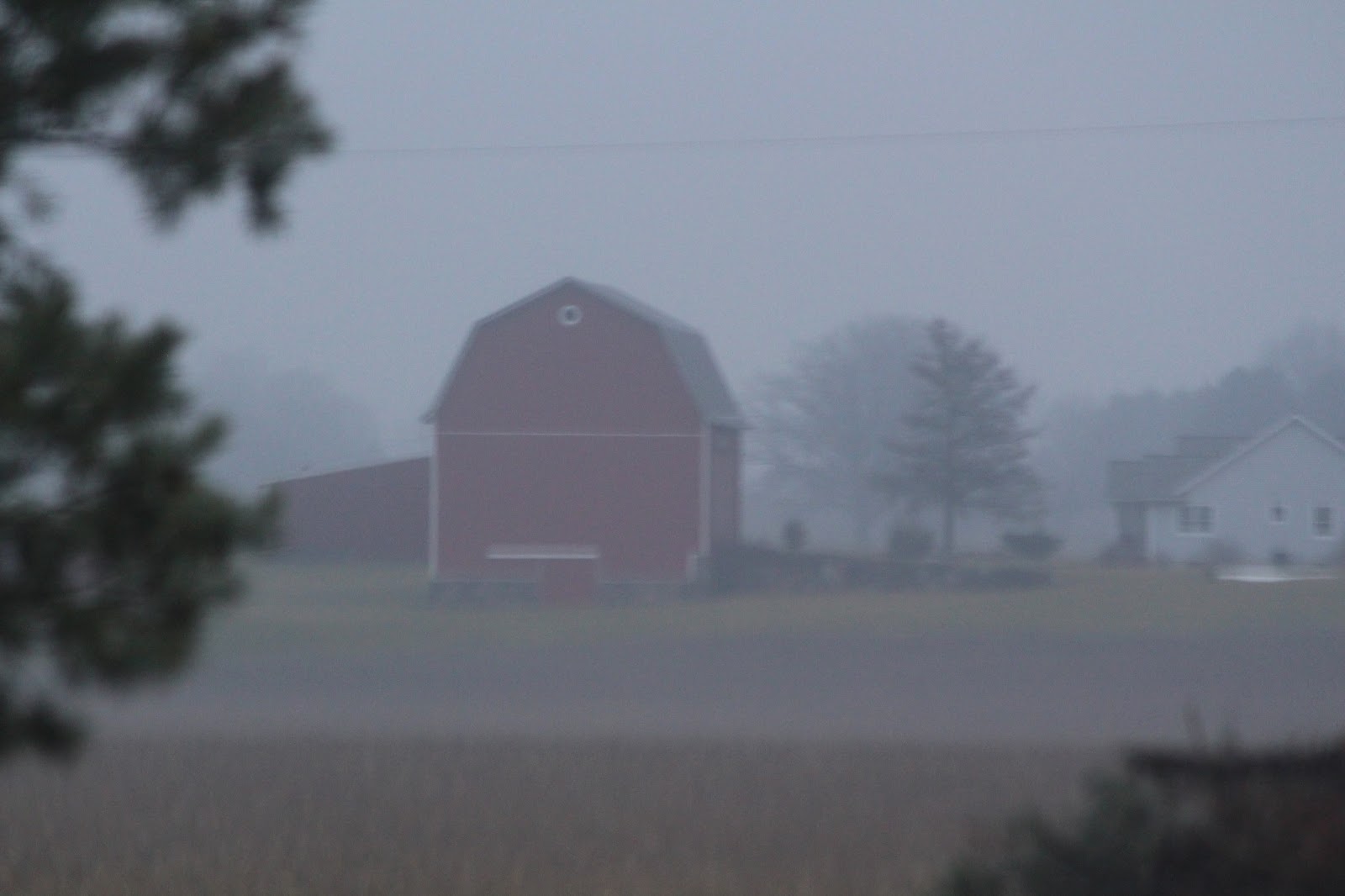 We are thankful for the moisture, however it takes considerably more work to be thankful for the recurring freeze thaw cycles!  Most of us Michaganders would infinitely prefer to just keep the freeze part until it’s ready to be permanently thawed.  Then there are those of us who would prefer that the temperatures stayed well above freezing all year; and again there are those of me who would prefer that from the middle of November until first of March the temperature averaged 5 or 10 degrees and came with 2 feet of snow! :-)  (I can hear it now–“Go North, young man, go NORTH!)  Although after the last couple of years with disappointing snowfall totals and much warmer than average temperatures, I’ve mentioned several times that we might just as well move South–then we’d at least miss half of the mud, and not be out much for cold and snow.   Someday I’m going to make it to northern Minnesota, or North Dakota or something to experience what real cold and snow are so I can share it with those complaining about 25 degrees :-)

The other night it did get cold enough for us to have some unusual Northern Lights!  We typically have northern lights every night (the city of Charlotte is a just a couple of miles to the Northeast!), but this was a little different.  The lights from the industrial complex were putting on a real show: 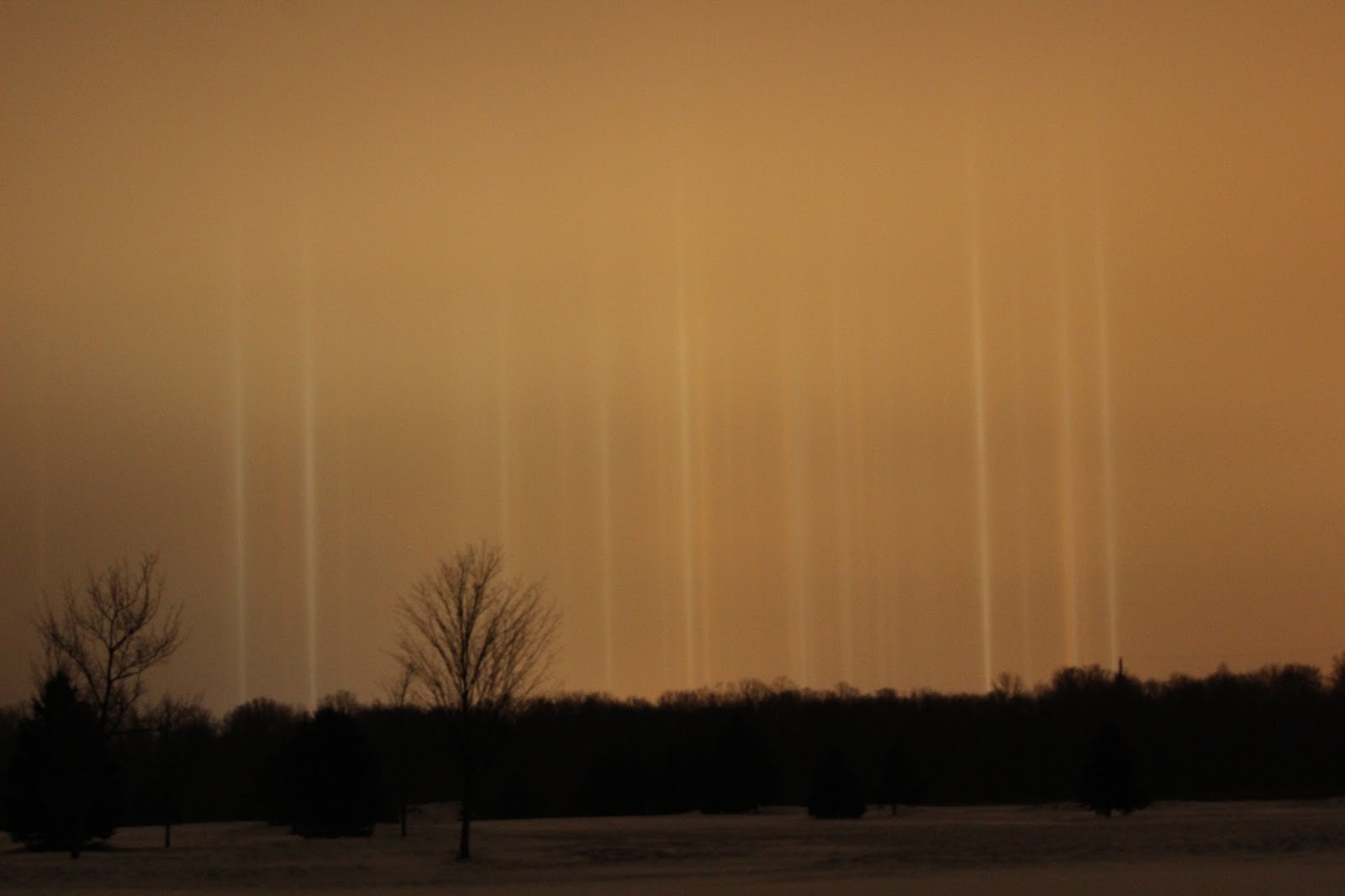 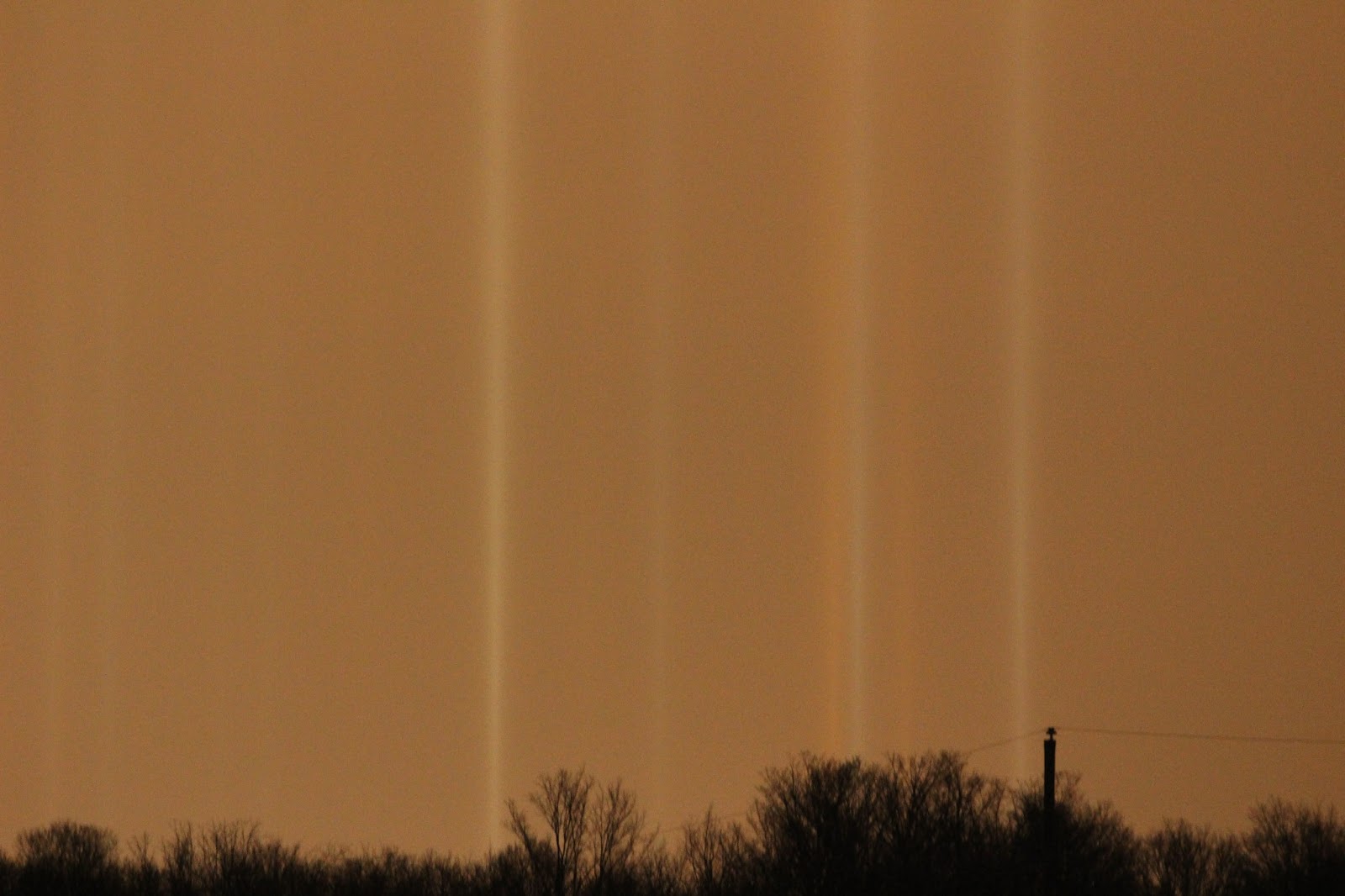 We’re not sure what caused this…it only lasted for maybe a couple of hours.  Perhaps the right combination of ice crystals in the atmosphere, or something like that?
Anyway it was a good night for picture taking because we got some nice shots of the house too!  So if you happened to come to PotterVilla this winter here’s what you’d have seen: 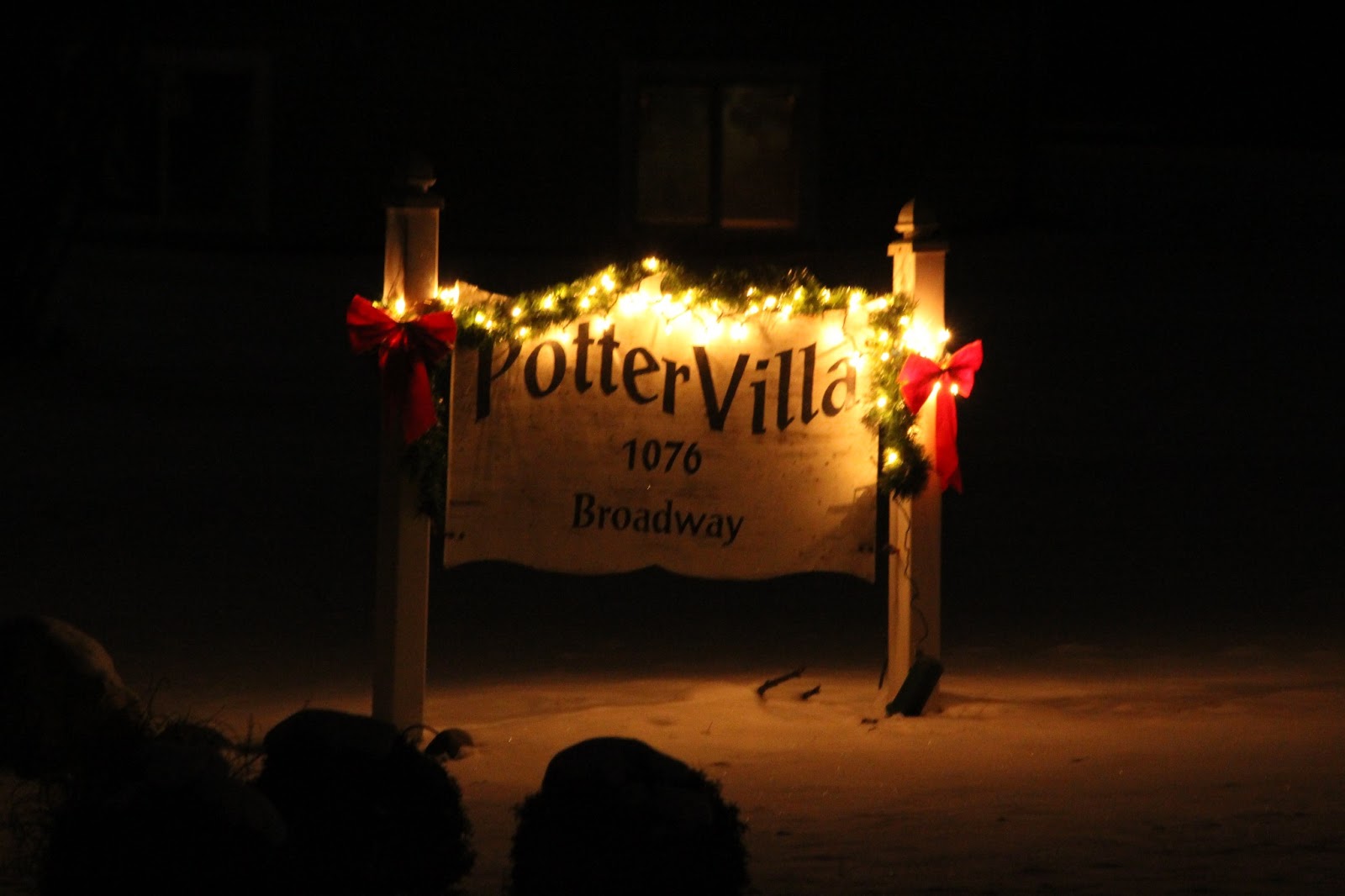 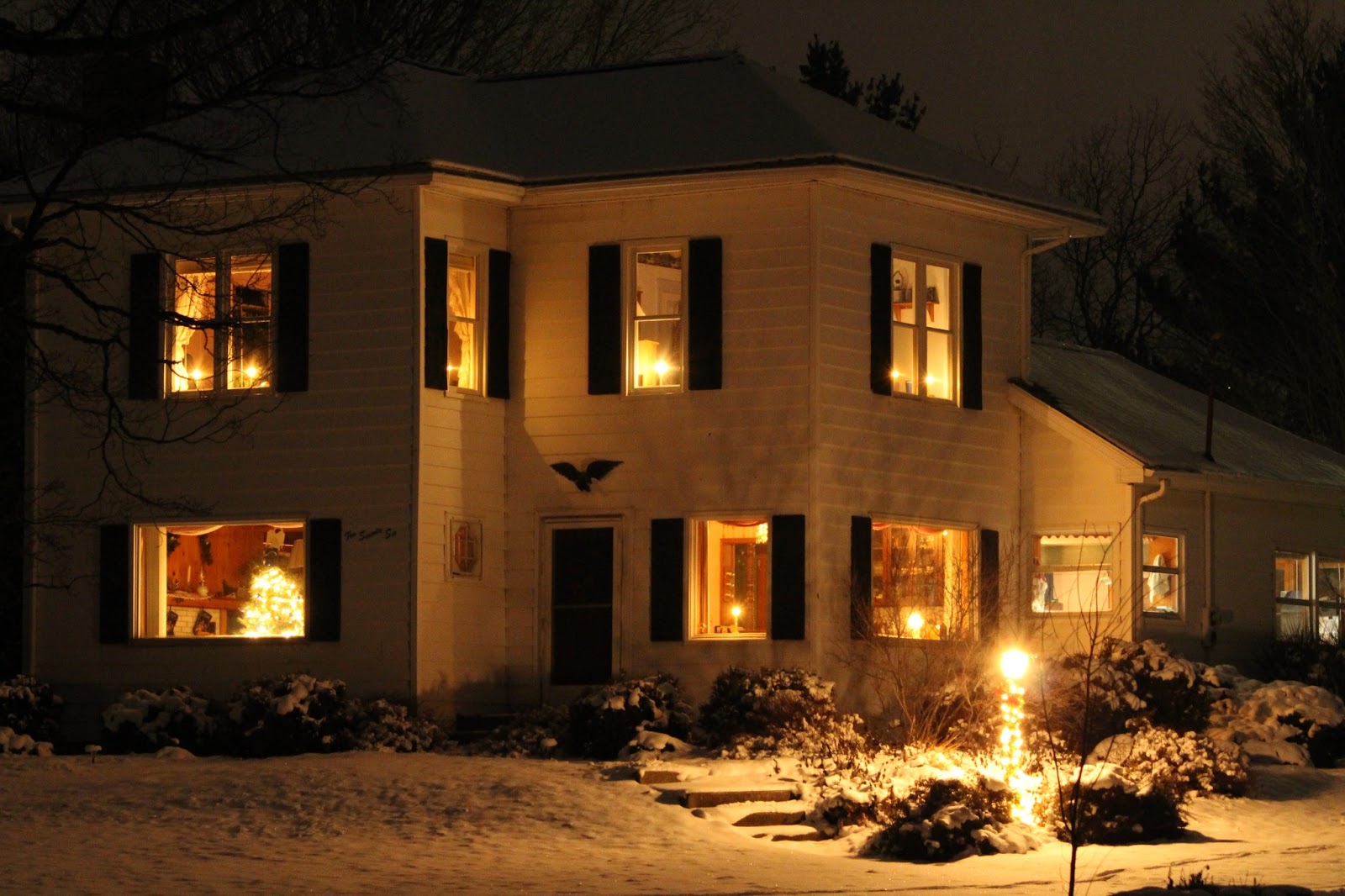 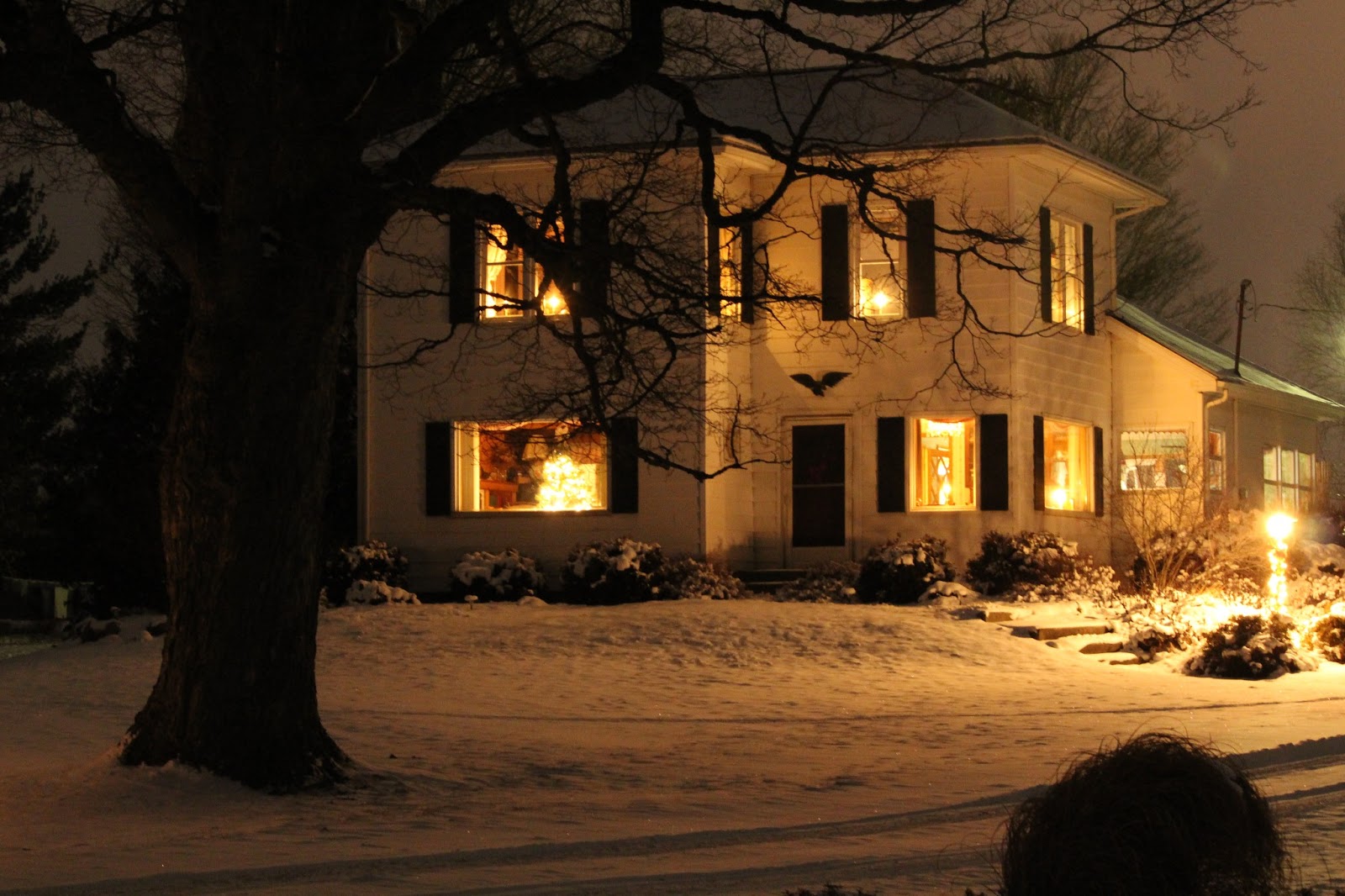 A few nights later we got a couple of interesting pictures of the moon…. 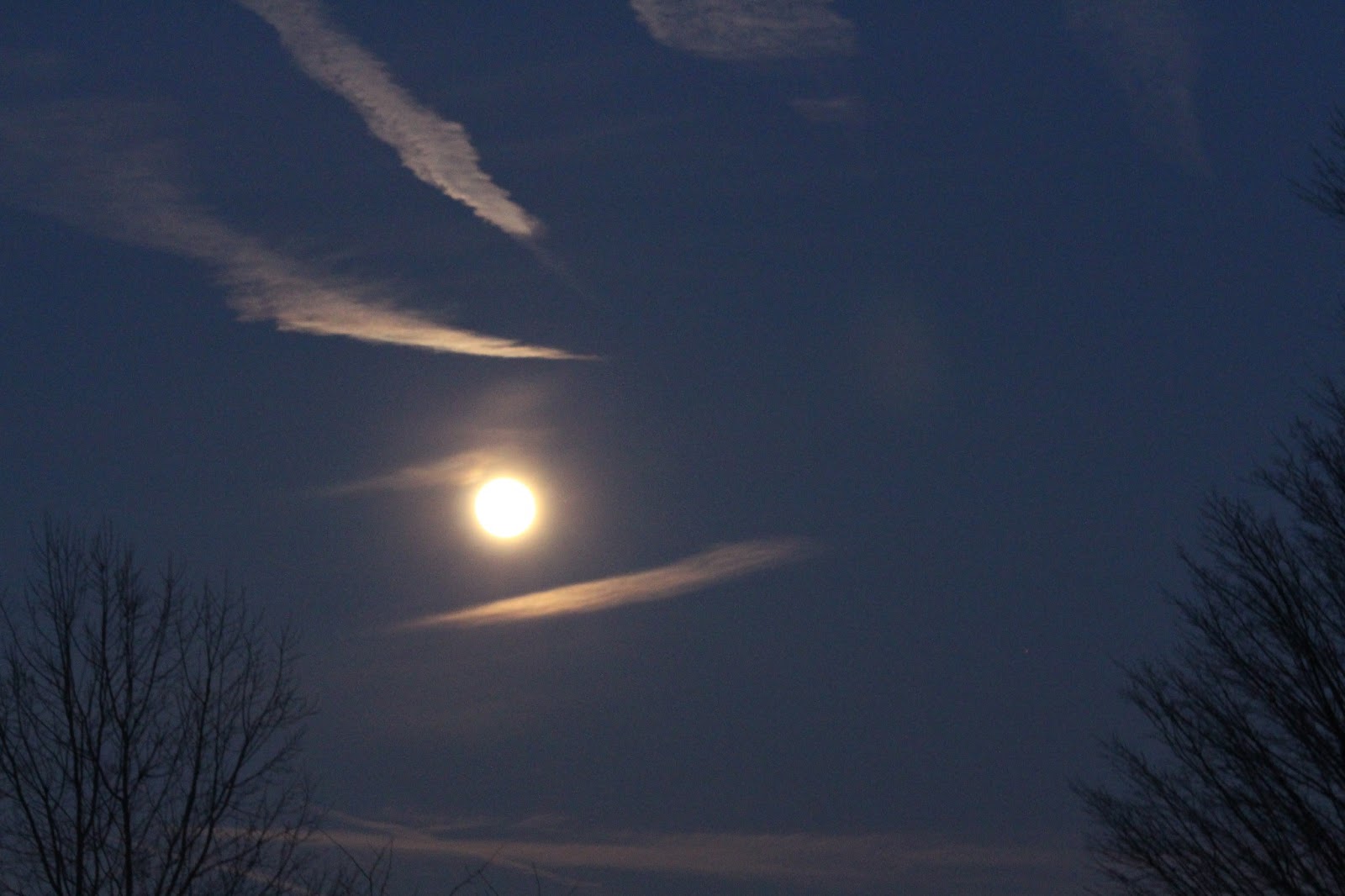 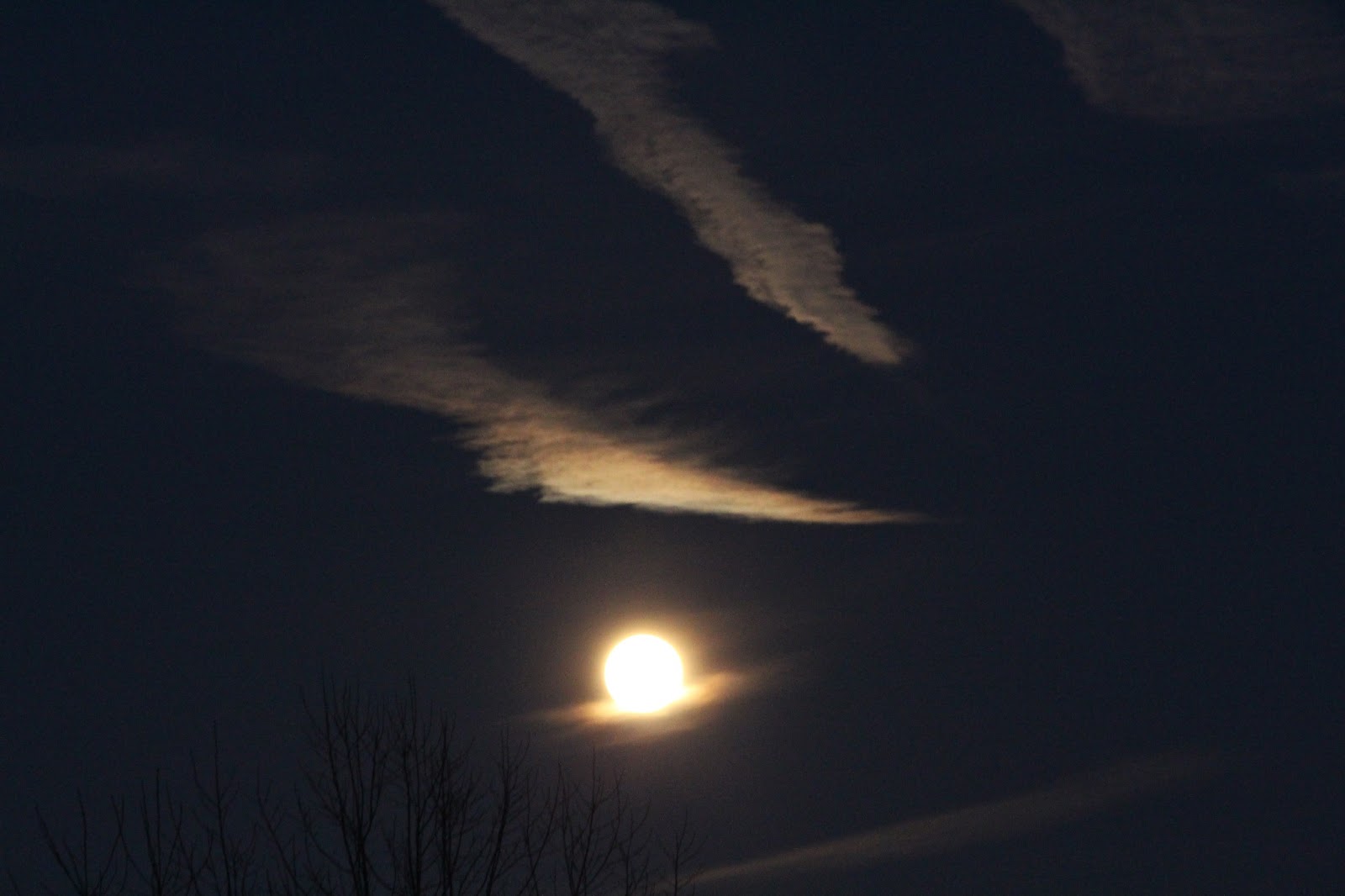 How could a person look at the beauty of creation, or the people around them and not see the hand of God? As Paul said in the book of Romans: “For what can be known about God is plain to them, because God has shown it to them. For his invisible attributes, namely, his eternal power and divine nature, have been clearly perceived, ever since the creation of the world, in the things that have been made. So they are without excuse.” (emphasis mine)

There’s another old hymn too part of which goes like this:

Thy bountiful care, what tongue can recite?
It breathes in the air, it shines in the light;
It streams from the hills, it descends to the plain,
And sweetly distills in the dew and the rain.
–Worship The King; Robert Grant

Part of God’s care for us lately has been in the stockpiling of wood for next year. Grandpa’s farm has had the blight of the emerald ash borer for a couple of years and he is up to his ears in dead and dying ash trees. Back last week I was able to take three days and devote that time to getting the wood from Grampa’s low ground while it was still frozen and solid. In that time we were able to cut and haul three loads of wood home (totaling about 9 1/2 face cords) and one load of logs to a friend with a sawmill. When things work that well and smoothly, I can feel God smiling on us! Now the big blocks are stacked up waiting to be split and re-stacked to dry a little before providing us with lovely heat next winter.

One day we started figuring how many times we had to handle the wood before it eventually made it to the ash pile out back…I think we got up to 15 or 16 before we quit–it was almost too discouraging to keep going! And of course some individual pieces would be handled more than that when you count in the ones that bounce out the other side of the trailer when thrown in and so on. The cost of “free” heat!

Have y’all ever heard the one about the fellow that was trying to figure out how much burning wood actually cost him? Well he started out with the chain saw, added in the cost of a pickup truck and trailer, a new back window for the pickup (the wood is supposed to stay in the back, not ride in the front seat, but some pieces seem to have a mind of their own!), gas to get to the woods and gas for the chain saw, new boots and 5 stitches in his left foot, the second new window, the repair bill for the chimney after the bottle rocket cleaning method went awry, the four sets of new trailer lights (broken from backing in to wood blocks or brush), yet another new back window….and he just about gave up cutting wood and went back to buying propane. But he just couldn’t do it–because you see burning wood is free!

A Snowy Day–Perfect for Afghan Pictures!

Posted by Matthew
Tweet
We awoke this morning to a beautiful sight–light, powdery snow covering everything in a delightful puffy coat! 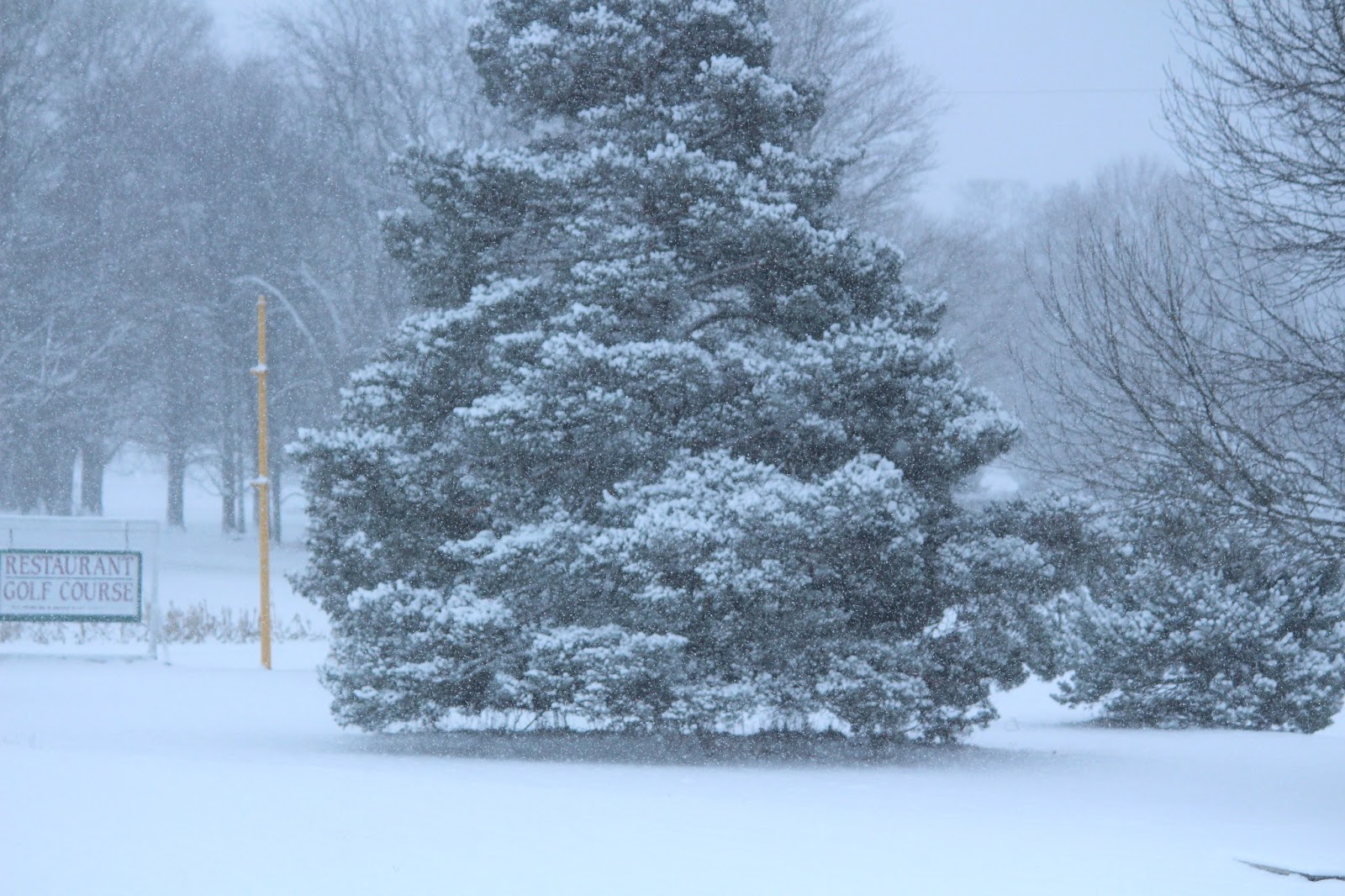 I think that winter is finally here: the weather is calling for snow and temps not higher than 25 degrees for the next week.  I love it! 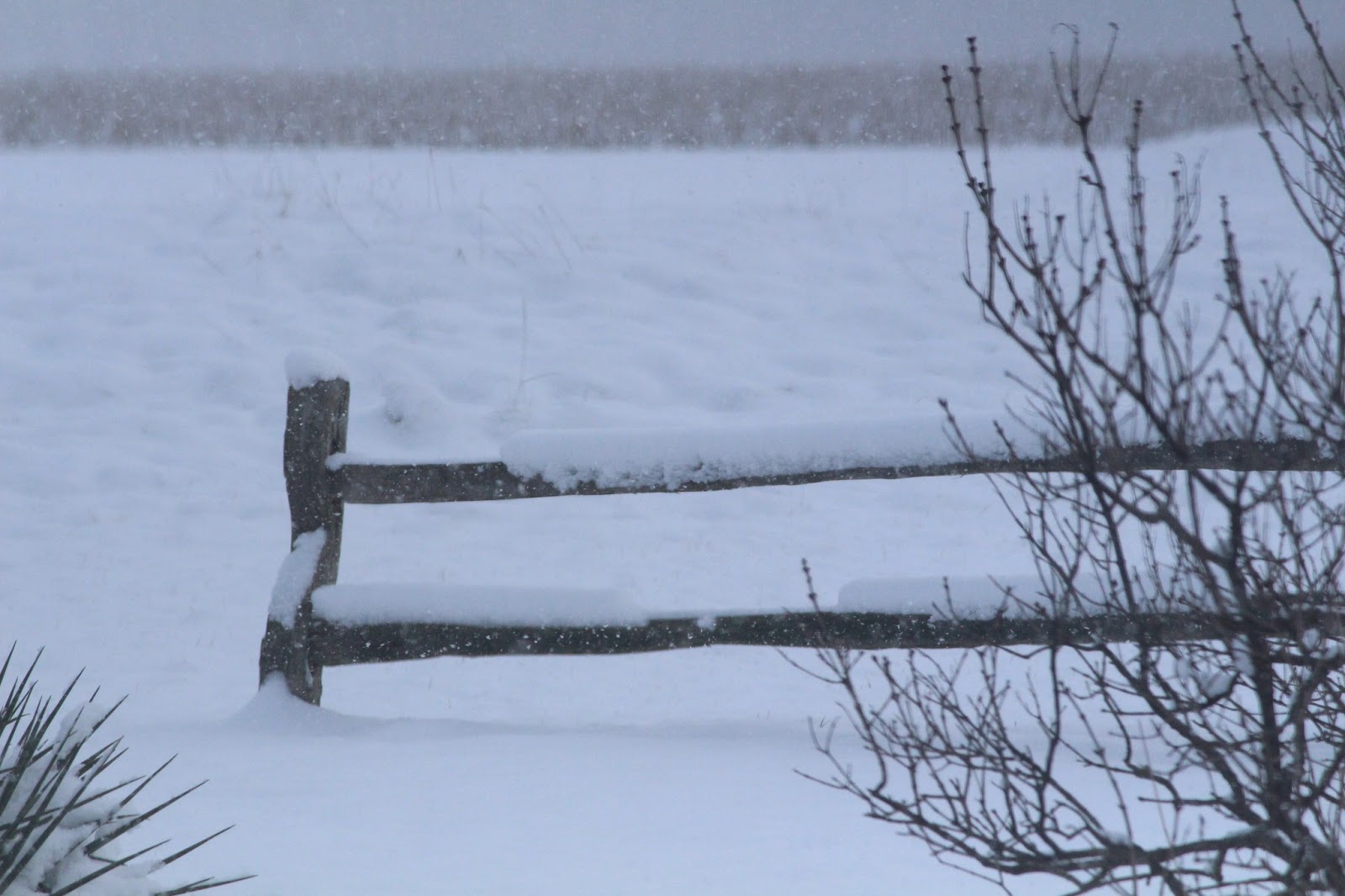 The snow is still falling and adding to the three or four inches we have already :-) 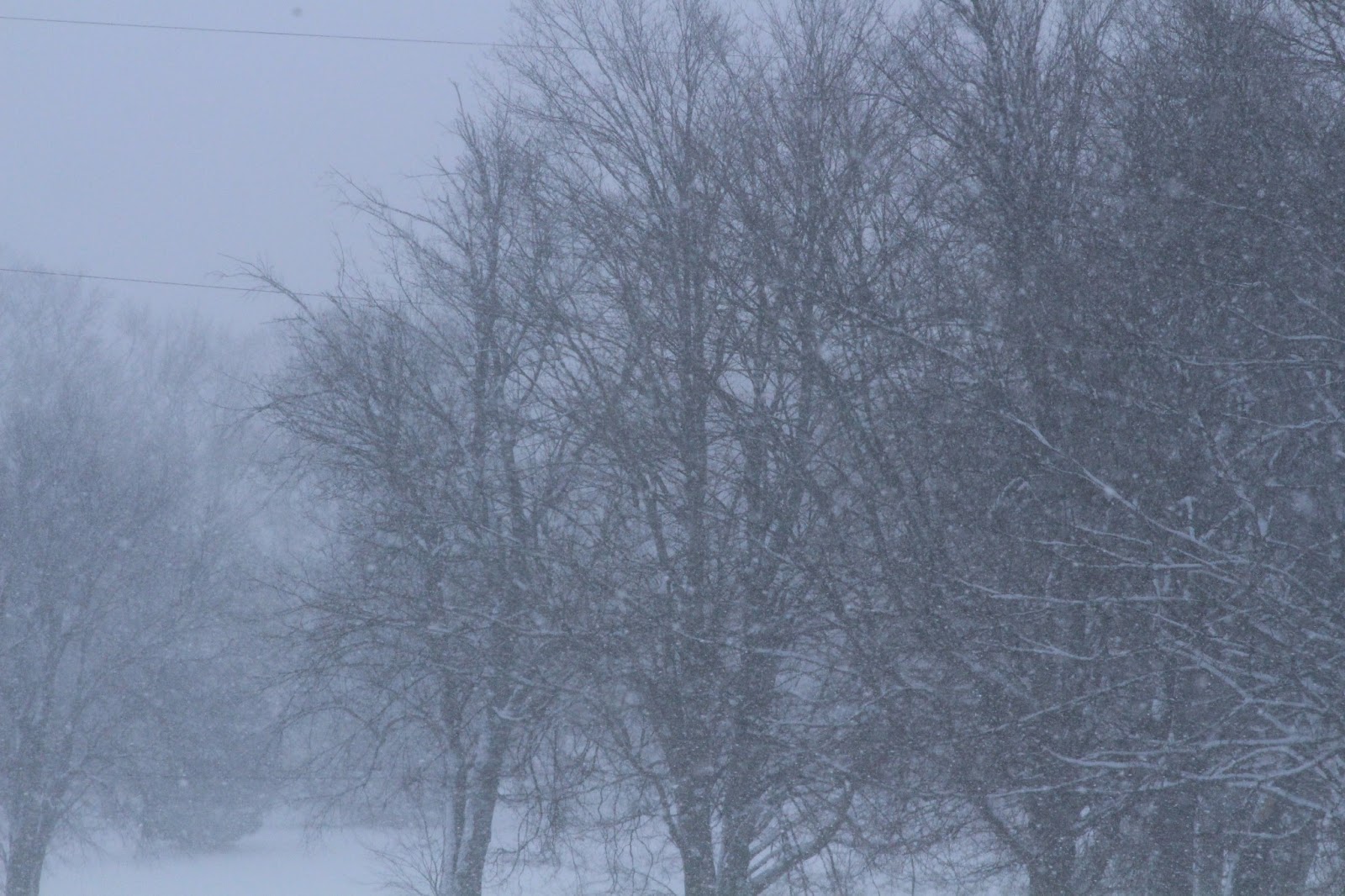 Over at the “farm,” the animals are glad for the respite from the vicious wind that has been blowing the past several days–it’s still breezy today but not the 25 mph plus that we’ve had. 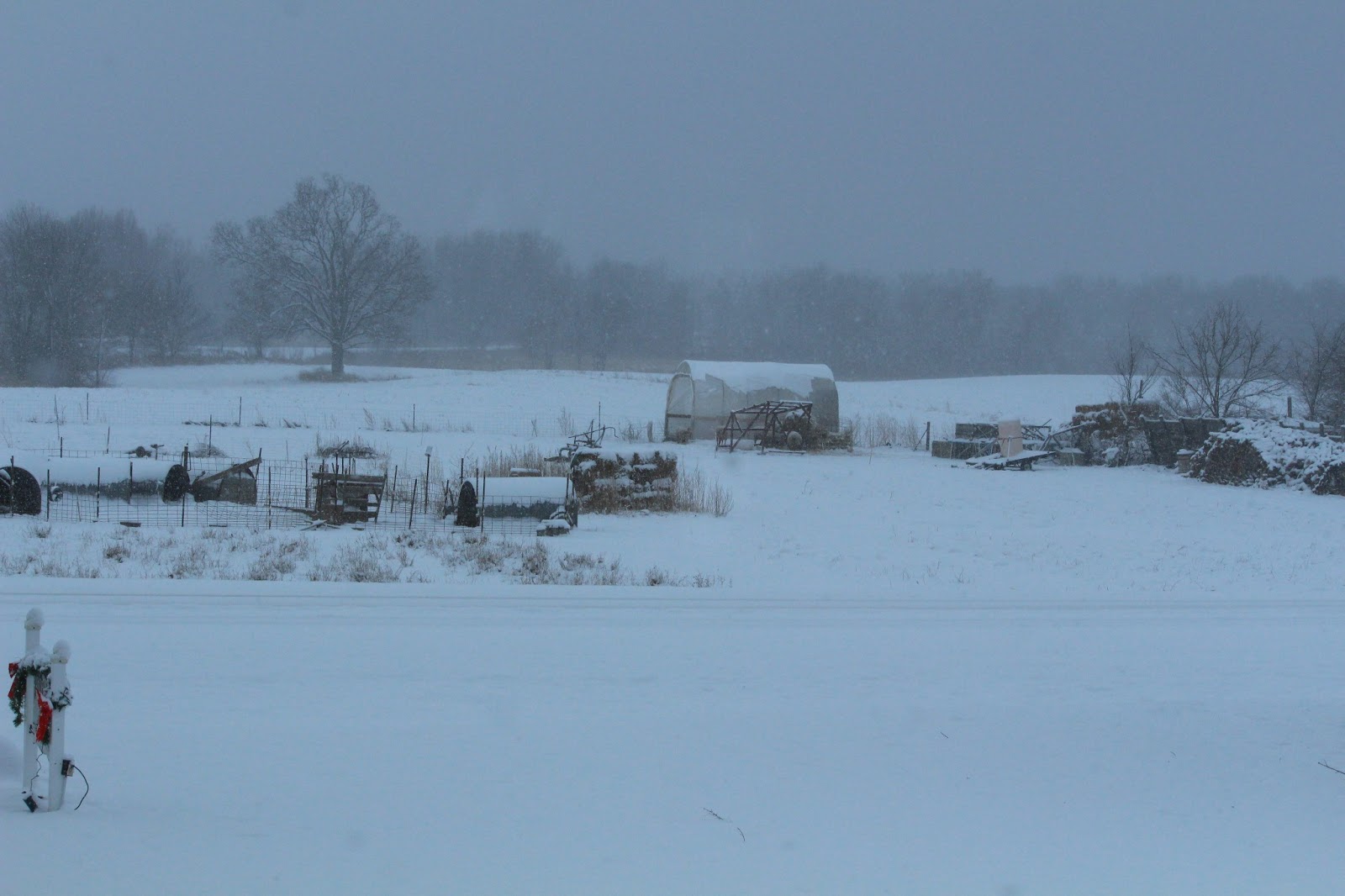 So what’s a better occupation for a cold winter day than cozying up with your favorite hot drink (hot chocolate with Mackinac Island Fudge ice cream anyone?) and looking at pictures of a cozy afghan?
This an afghan pattern that Mom has made a couple of times for a special friend or two over the last few years.  We’re finally getting the pictures up of one of the completed blankets :-) 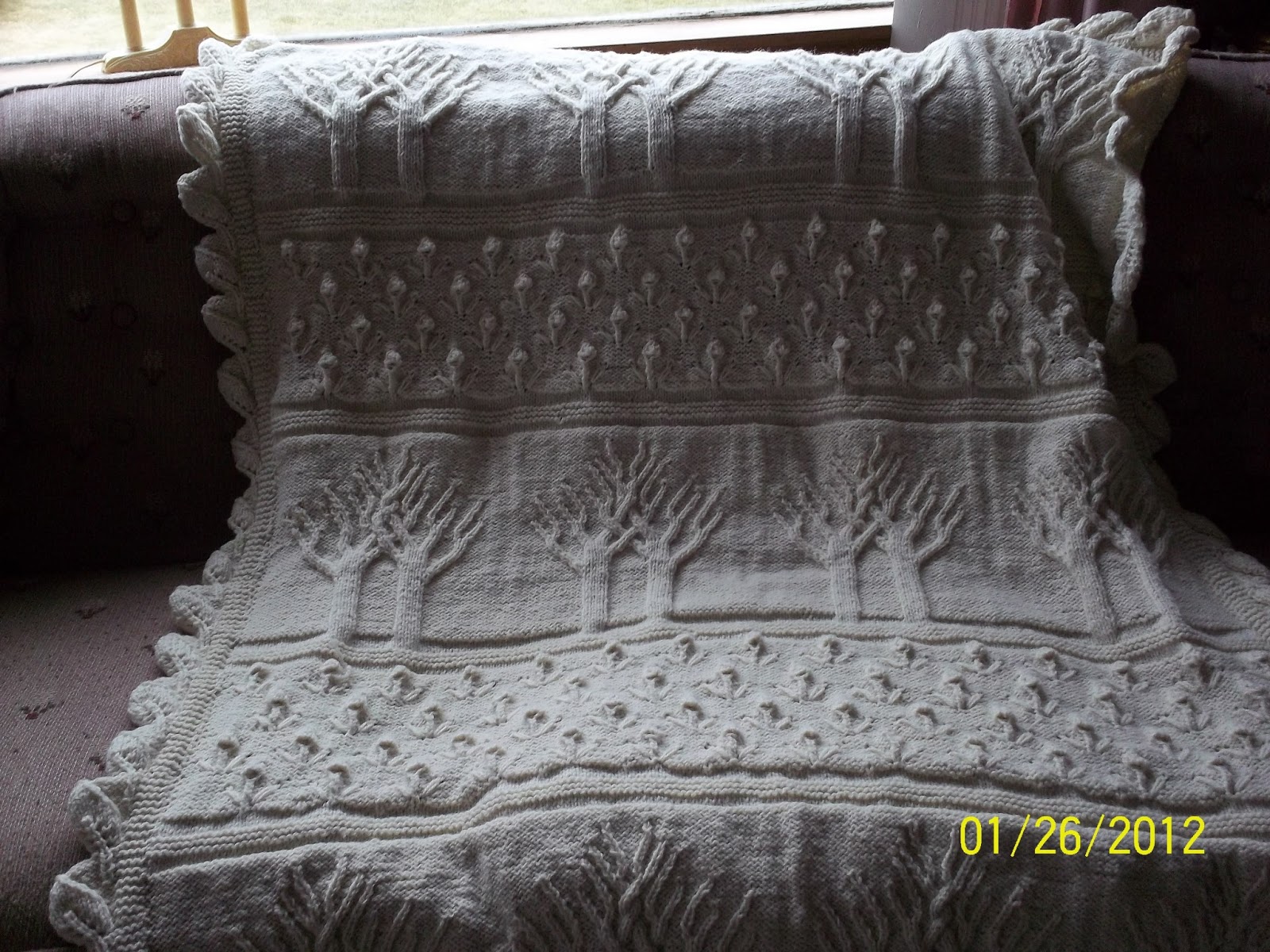 The pattern is called “The Tree of Life” 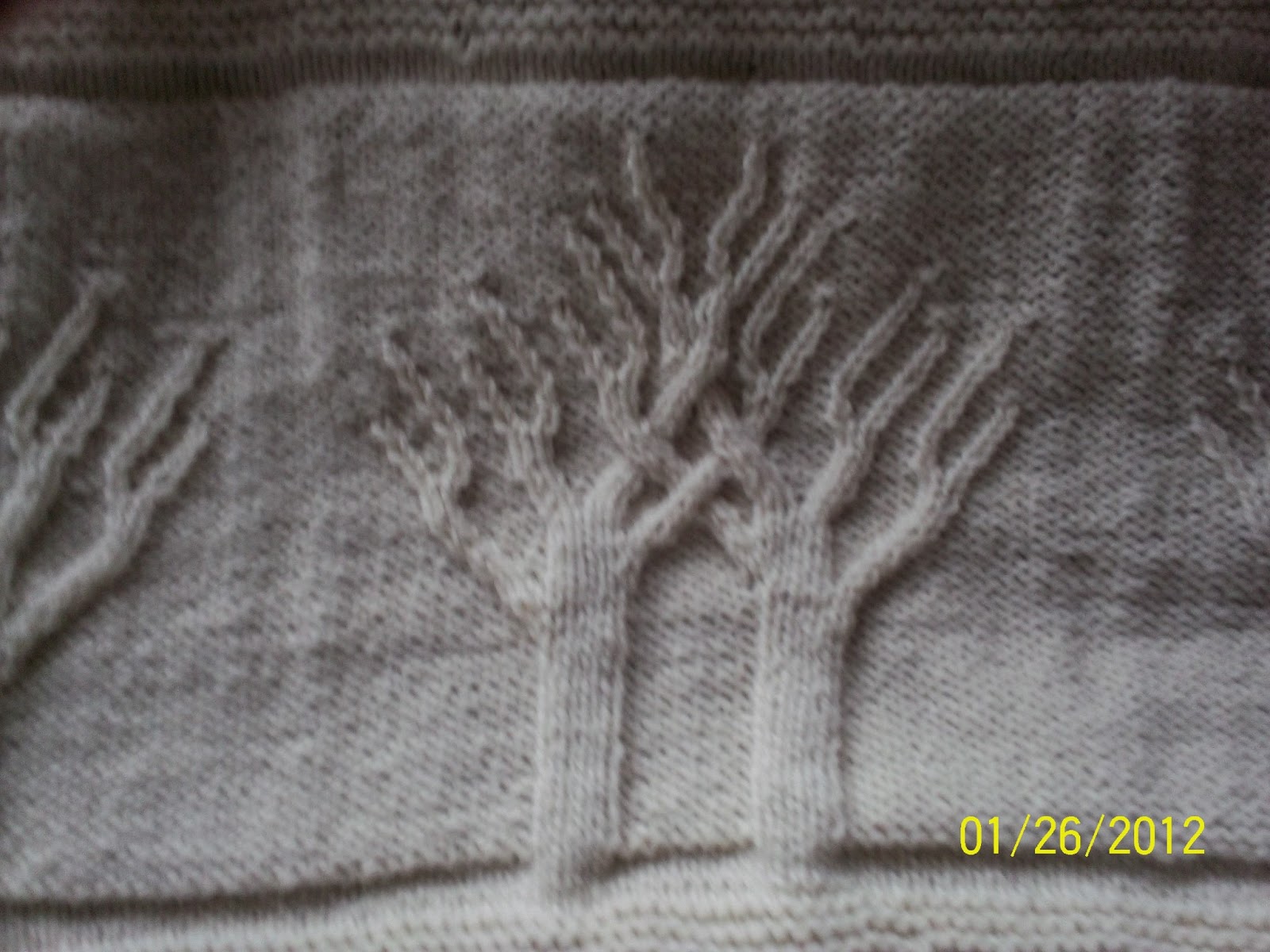 Below each tree panel is a ‘flower garden’: 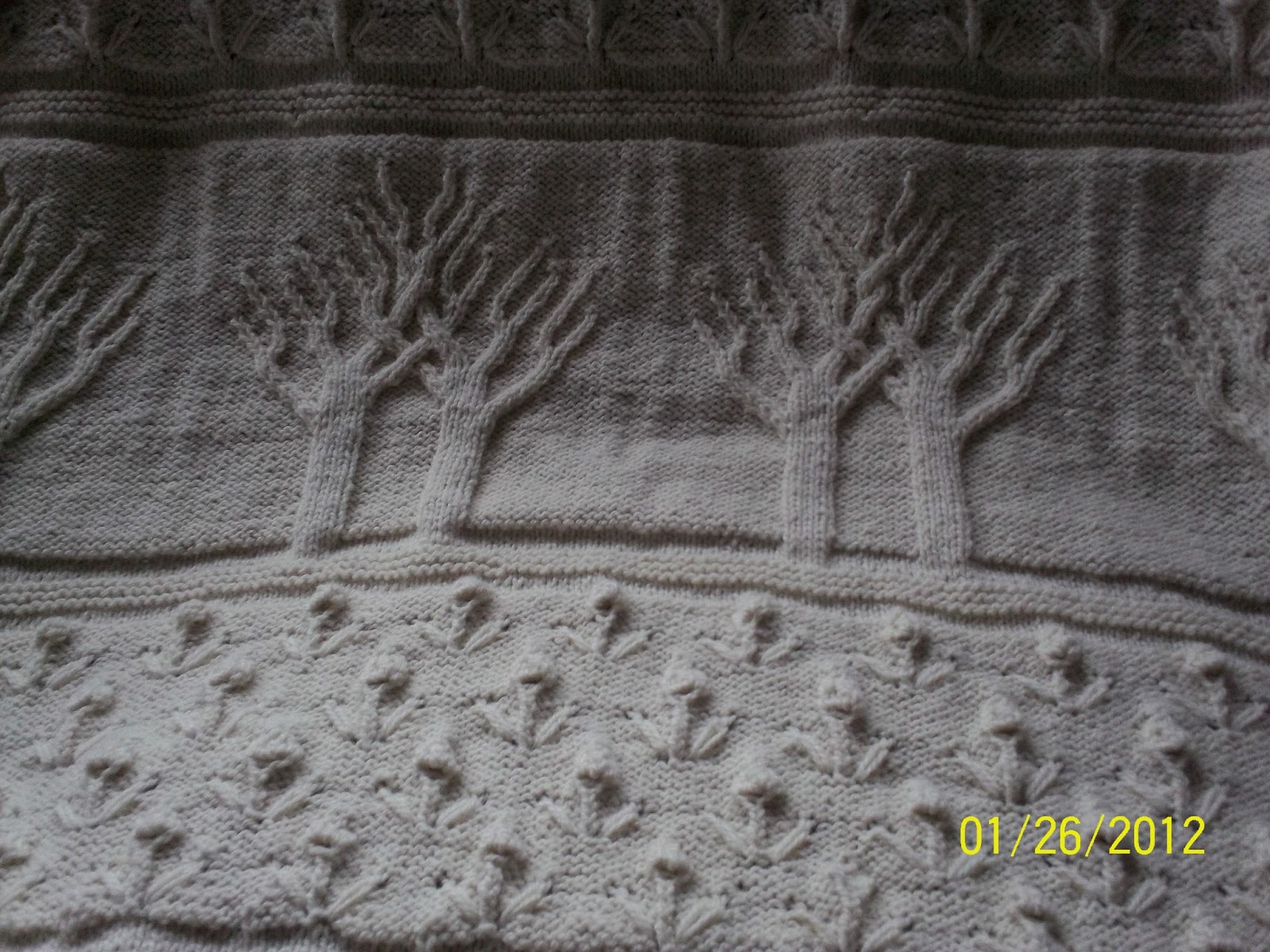 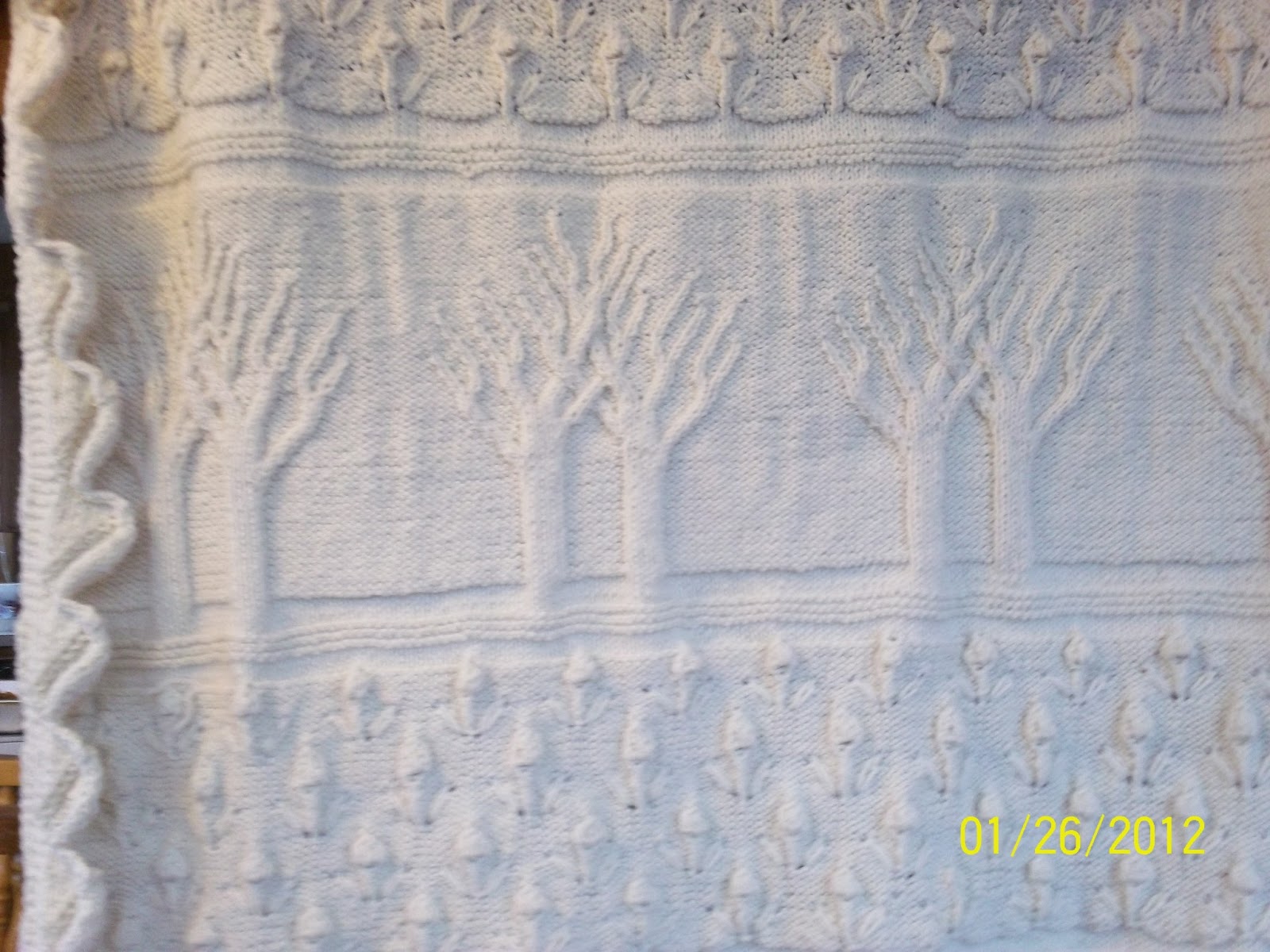 This shows the blanket before the edge was attached: 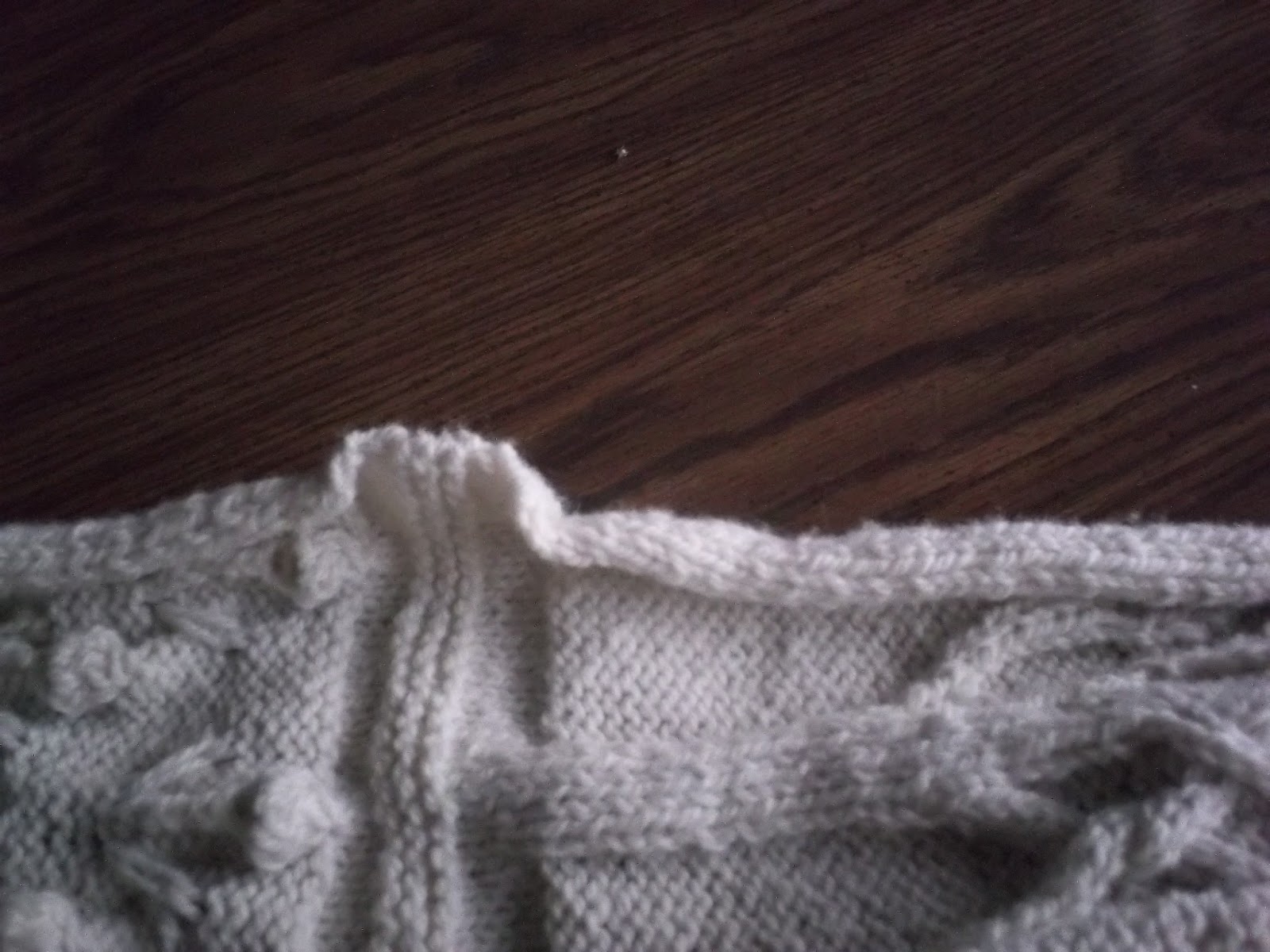 With the edge sewn on: 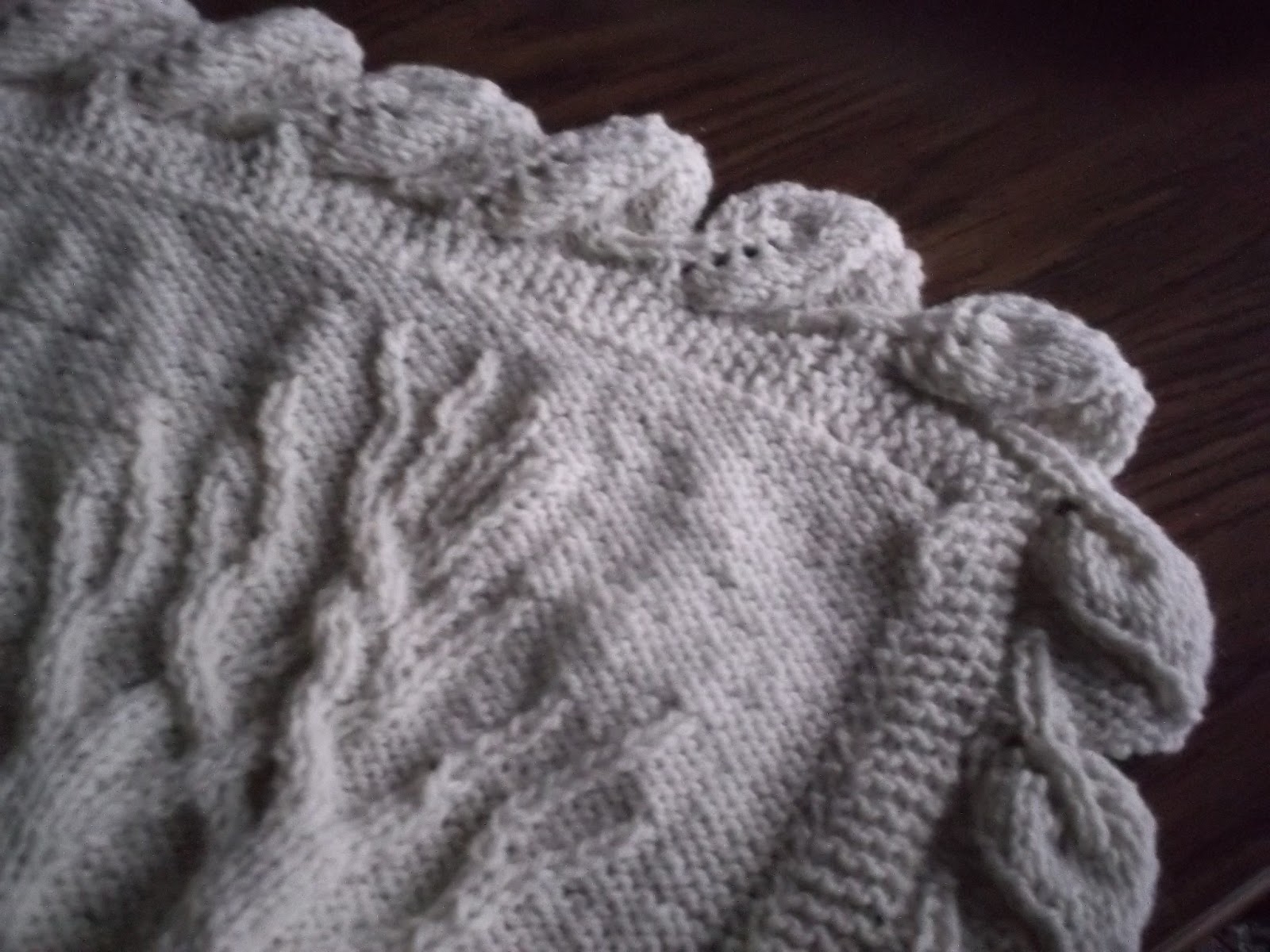 And the edge its’ self!  It is a very pretty bit of work on it’s own and might work well for a lot of things.  (or so Mom tells me….I haven’t made it past the straight knitting part, let alone pearling, so don’t know much about the subject :) 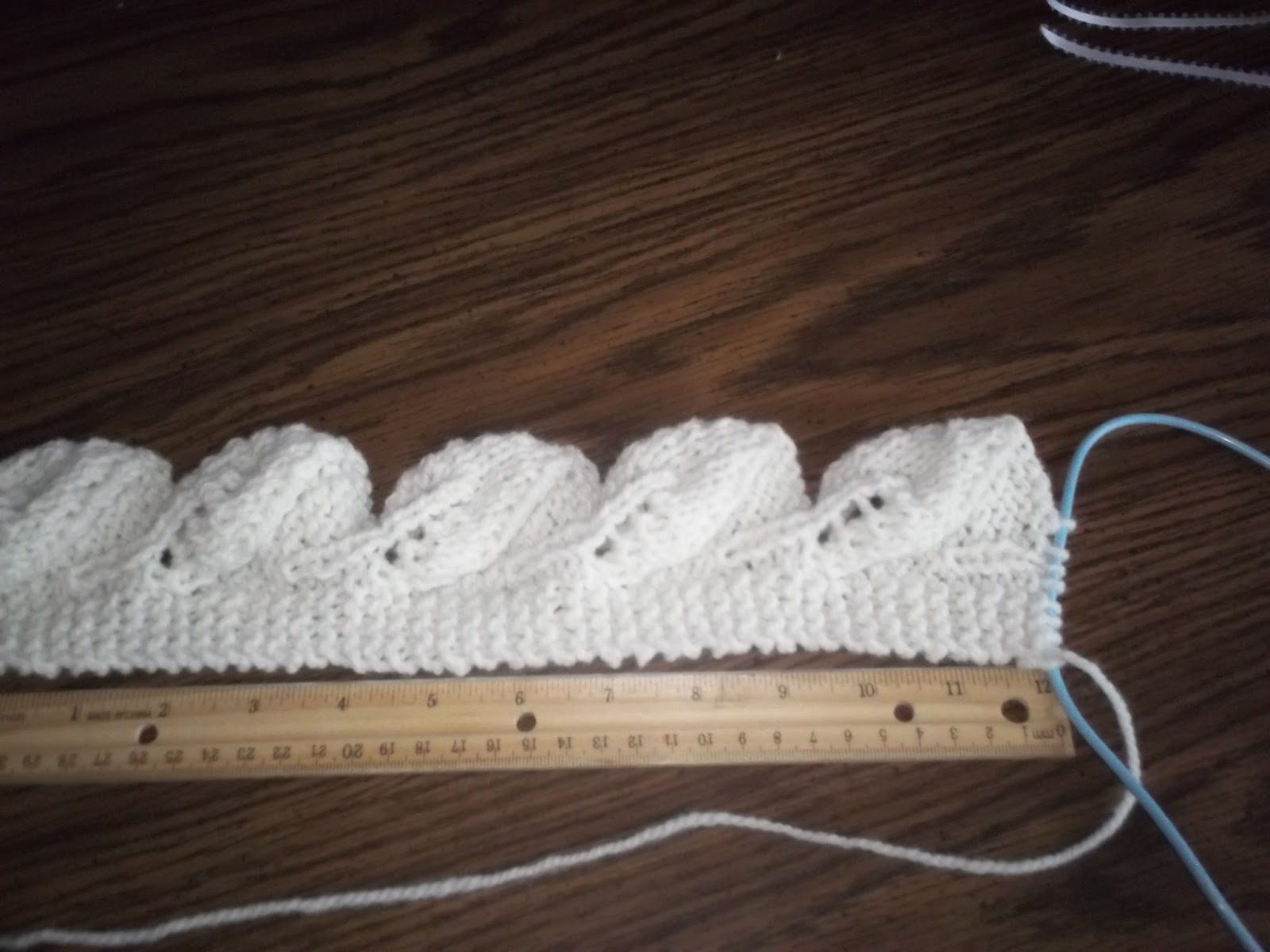 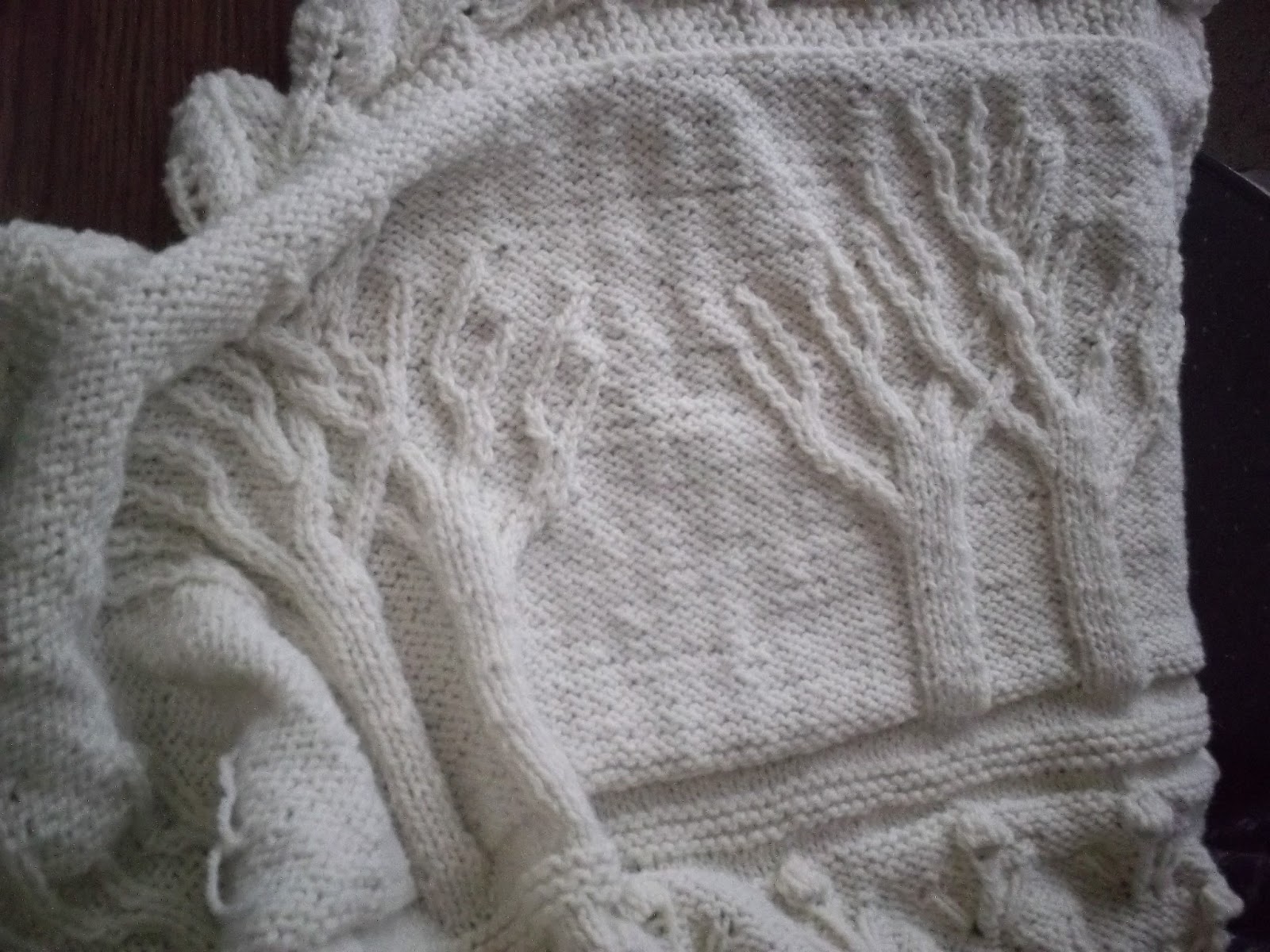 So until next time we pray that your wood pile will be well filled, your hot cocoa close to hand and a nice afghan never too far out of reach!
Matthew
Tags: Miscellaneous
CONTINUE READING >
1 comment