So we gathered with other believers today, on the first day of the week, at our little country church; one that still has a dirt parking lot, gets the majority of its heat from burning wood, has an average attendance of hardly more than 50 people.  We are a jumbled mix of people and personalities: retirees, farmers, bankers, computer programmers, school teachers…..some attend sporadically, others are there with their families every week like clockwork….. some are the third generation of their families to attend here, others only came because they were in town to visit a friend.  Some people come only for Sunday School, some only for the main service.

We gathered today, on the first day of the week.  A motley crew to be sure–but what brought us together?  There are so many differences, so many opinions and personalities…. And why to this little out of the way church in the country?

It is not a gathering of intellectual philosophers, nor a band of bawdy revelers.  We are just “plain, ordinary folks.”  We don’t have “star power”, filling the pews by the winsome ways of a nationally know figure; we don’t cater to the entertainment crowd–those only looking for a good time; we don’t have a souped up ‘worship’ band to liven the place up and bring in the crowds with adrenaline pumping rhythms; the attendance has actually dwindled over the last few years.

Are we the perfect bunch that just has everything figured out?  Far from it!  Do we, simply tow the “center line” because we fear extremes finding apathy preferable to risk?  I pray not!  Is it societal and peer pressures that cause us to congregate for this weekly assembly?  I long for a nation that is Godly enough for this to even enter into the equation!

So why do we come?

Simply put, we come because God called us.

We come because he called.  It is a call that is open to all, but only those who choose to respond will gain what is promised.

“[The righteous], who through faith conquered…and gained what was promised.” (Heb 11:33)

“Now faith is confidence in what we hope for and assurance about what we do not see.” (Heb 11:1)

“For it is by grace you have been saved, through faith–and this it not from yourselves, it is the gift of God–not by works, so that no one can boast.” (Eph 2:8-9)

But we see that faith cannot be uninformed–we must know the reason for the hope that is with in us. (1 Peter 3:15) Faith in faith itself is not a saving faith. Nor will faith in a lie prove to be salvific–if one believes a lie that does not make it true–even for that individual.

This is what is necessary for salvation–to avoid the terrible and eternal punishment of a Jealous God–but more to receive the life everlasting, the gift of the Spirit, and to know the power of a transcendent and omnipotent God at work in our lives.

This is why we few–imperfect and blighted by sin–come to the little church in the country with a dirt lot and wood for heat: We are called according to his purpose.  He who calls has the right and the authority to do so.

We “know the hope to which he has called you, the riches of his glorious inheritance in his holy people, an his incomparably great power for us who believe.  That power is the same as the mighty strength he exerted when he raised Christ from the dead and seated him at his right hand in the heavenly realms, far above all rule and authority, power and dominion, and every name that is invoked, not only in the present age but also in the one to come.  God placed all things under his feet and appointed him to be the head over everything for the church, which is his body, the fullness of him who fills everything in every way.” (Eph 1:18-23)

Christ who calls us together, on this first day of the week, is our head; he is our Lord.  He is over all and it is through him that we have strength.

As we look forward this week to Good Friday, when on that black day in History; that day when “God made him who had no sin to be sin for us” (2 Cor 5:21a),we remember the rest of the story….

We remember that the wrath of an infinitely holy and righteous God had to be satisfied, so at infinite cost God sacrificed his only son: “For God so loved the world that he gave his one and only Son, that whoever believes in him shall not perish but have eternal life.  For God did not send his Son into the world to condemn the world, but to save the world through him.” (Jn 3:16-17) “So that in him we might become the righteousness of God.” (2 Cor 5:21b)

And though this could not be accomplished without the death of Christ, we must not stop there!  Indeed though the death and burial of Christ were necessary to vindicate the Mercy of God and to clear him of any accusation of injustice the Resurrection of Christ is required to vindicate the Son (Paraphrase of Paul Washer in The Power and Message of the Gospel)

It is the Resurrection that is the cornerstone of our faith, the lynch pin of our beliefs and the cause for our gathering…on the first day of the week.

And so we come. And we rejoice.

To God alone be the glory!

A Few More Days of Winter

Posted by Matthew
Tweet
Well rest assured here in Michigan it is still winter no matter what the calender says about Spring arriving tomorrow!  This morning we awoke to the wind whipping snow though the air in impressive displays.  Some of the birds are wondering what they ever came north for this early: 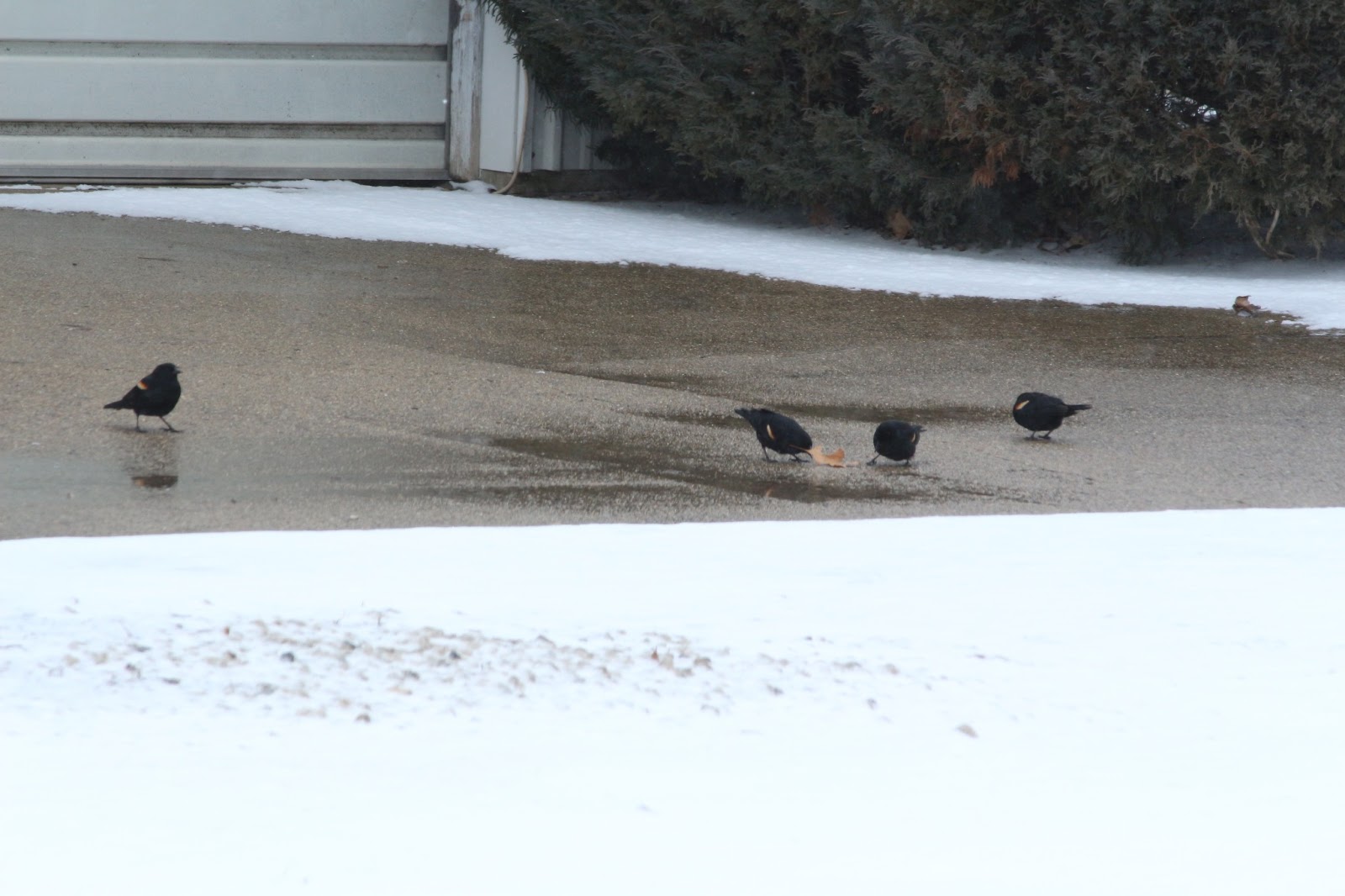 Even the winter regulars were sitting with their backs to the wind and hanging on tight during the gusts! 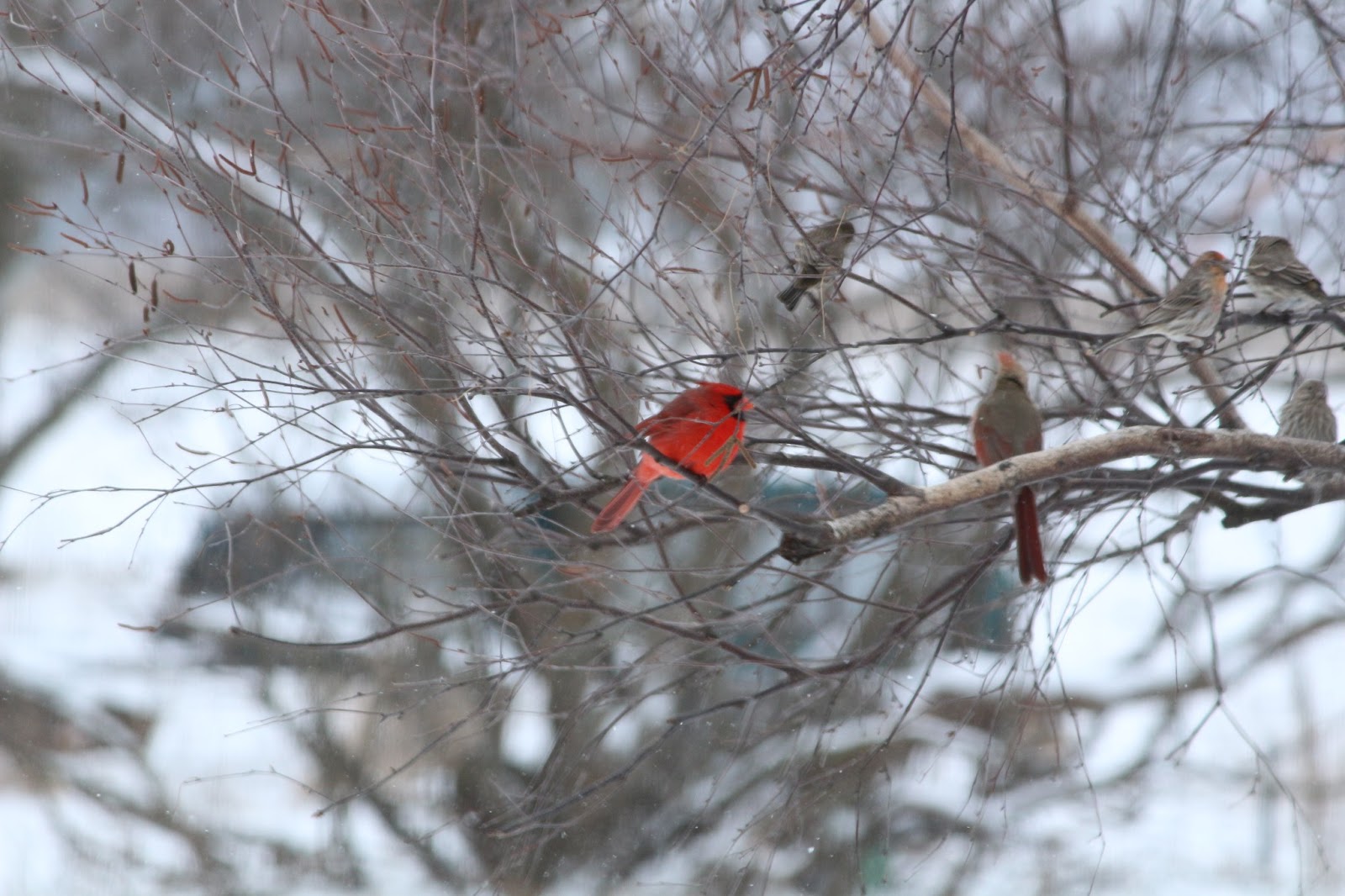 The sheep which were out enjoying the sunshine on Sunday when I took the photo below, were pretty much keeping to their barn today–and they still have a 4+ inch thick coat on. 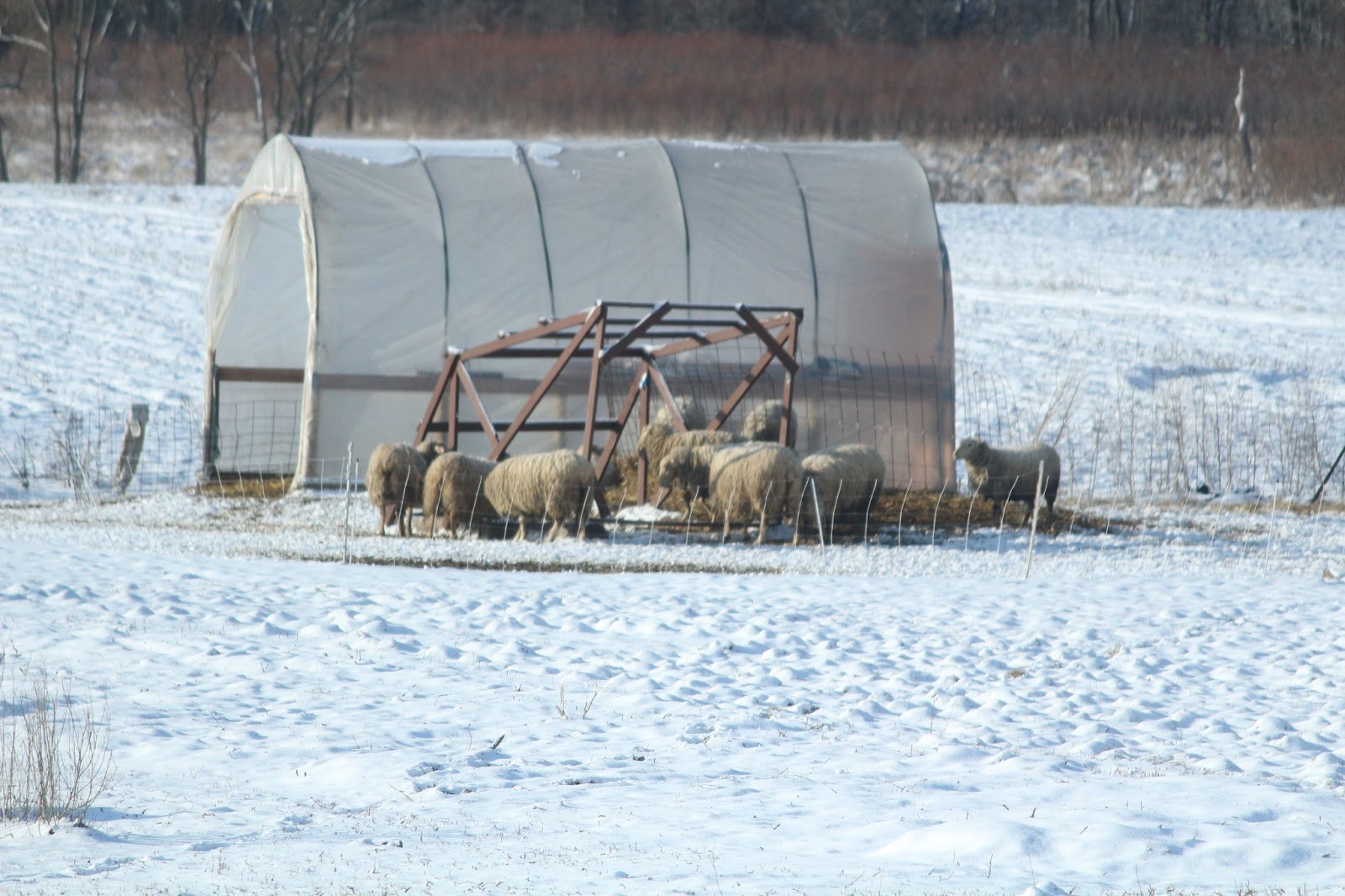 With the wind still whipping up ‘snow devils’ outside and those icy pellets stinging through the air, we inside have much to be thankful for!

We rejoice in knowing the Creator, who has provided a nice warm house for us (perhaps we wouldn’t even have needed quite that much wood on the fire….80 + degrees is plenty warm…) and who provides for even the animals right down to the sparrows.  If He notices when a small part of His creation like a little bird suffers, how much more must He care for us?

As we look forward to Easter and another celebration of His life, death and redeeming work for us on the cross, but more His resurrection! how can we fail to be impacted?  How can we see His suffering and not feel unworthy of such love?  How can we hear of His mercy and grace and be unmoved?  How can we feel His forgiveness and not aspire to do worthy service in His Name?

Standing amazed in the presence of Jesus the Nazarene,

Posted by Matthew
Tweet
Our days are getting longer, the sun is shining more and the snow is slowly melting…. 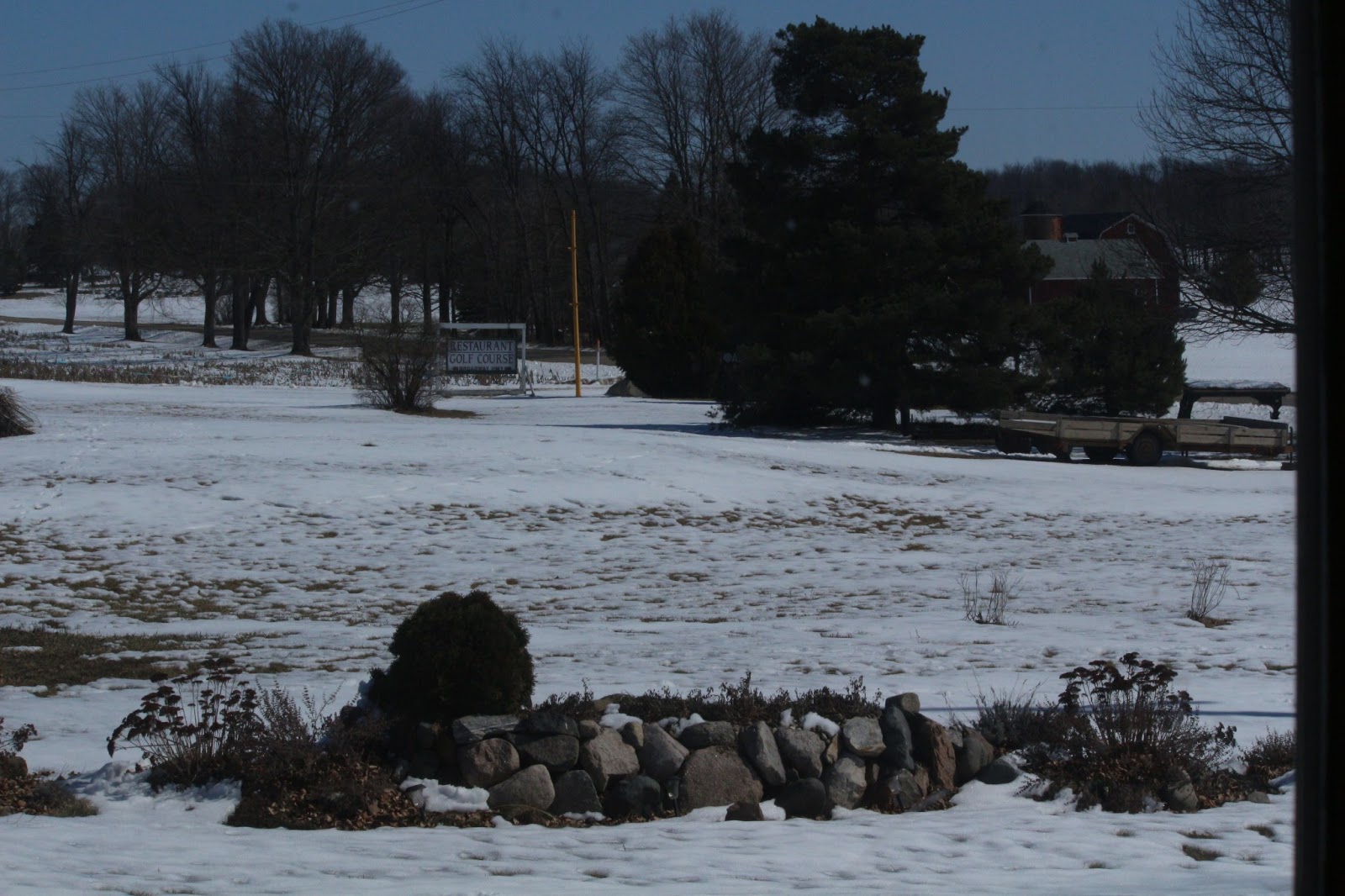 Our walk is underwater…. 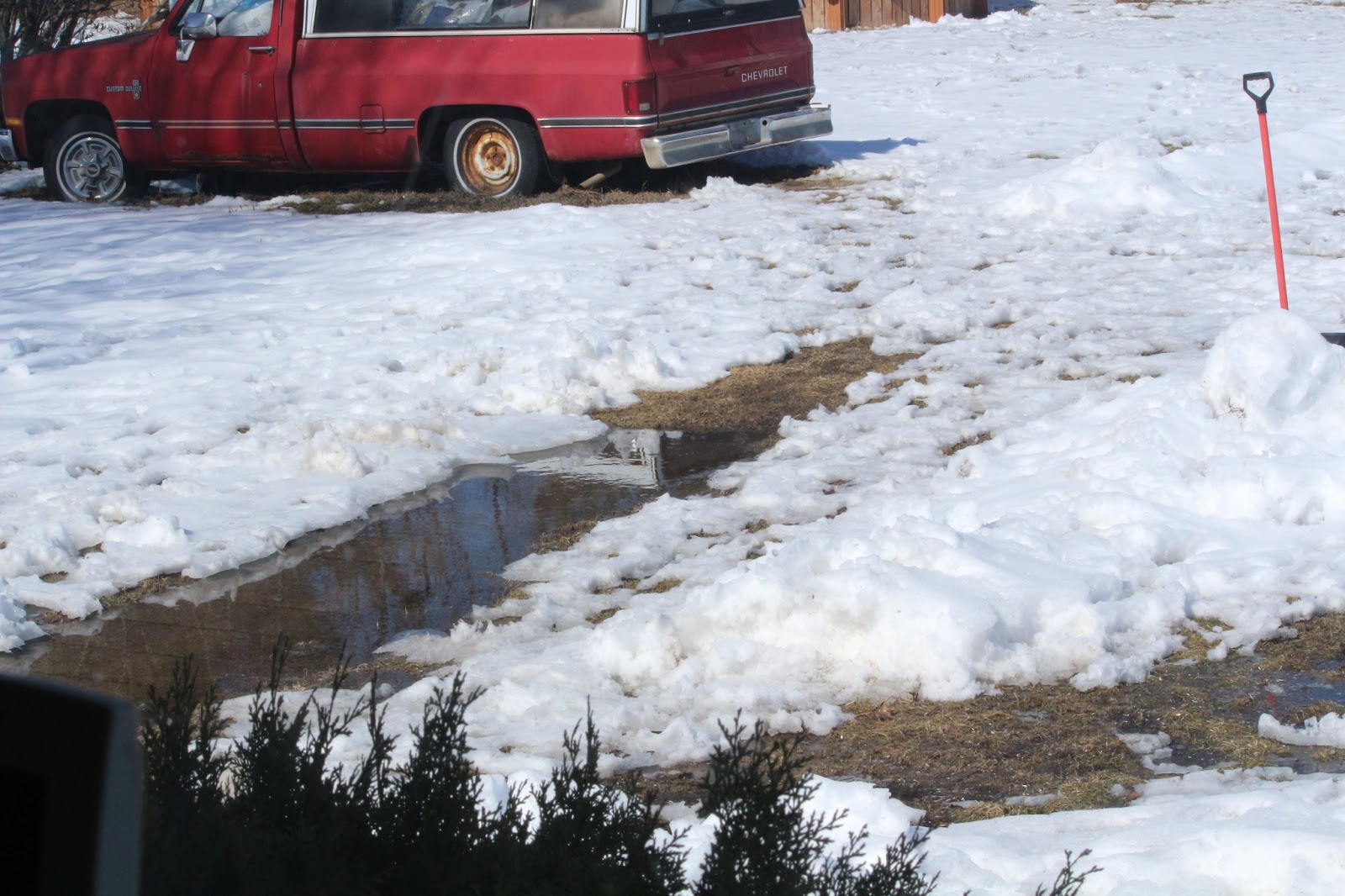 The winter birds are taking flight in the face of new competition at the feeders…. 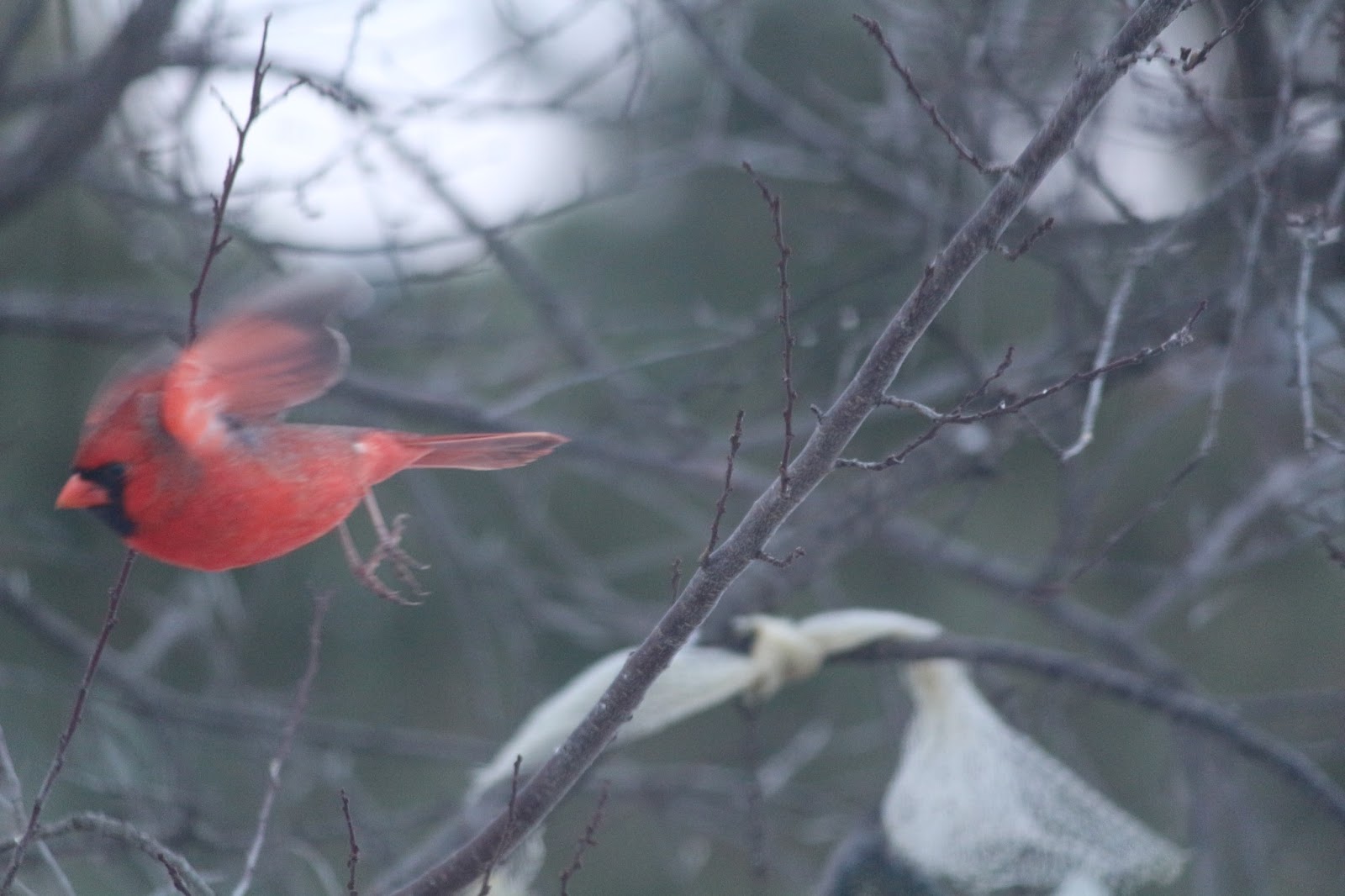 And we even spied this fellow the other day…..

But is Spring really coming?  We have been enjoying the sunny days and warmer daytime temperatures, but it is still Michigan and so we know not to get too excited yet–there is probably at least one more winter storm in the offing for us.

Like in the Christian life, we know that someday all things will be made new, but in the meantime we must continue lean on Christ and pray for spring-like renewing to come through His Spirit and refresh again our hearts and minds.  Continuing to lay aside the mud and slop of life that so easily entangles, and taking care not to slip on the icy spots of sin and doubt, in order to run with perseverance the race that is set for us to run!  Trusting that when the storms of life assail and we face fear and change and every worldly assault, Christ will ever be our guide and take us to His place of rest and peace–for He has Promised, and He is Faithful.
As Spring steadily approaches with the promise of new life and fresh beauty, I pray that you and I will bear with new fruit the signs of being a new creation in Christ; and that the beauty and grace of His character might shine through us to the praise of His glory.
Praising God for His continual and all sufficient grace, until the time of His glorious appearing and then forever,
Matthew
Tags: Miscellaneous
CONTINUE READING >
1 comment