A Graduation, A New Job, and Some Other Stuff

It seems like I always start out by saying that it’s been awhile since I’ve posted….So I’m not gonna do that this time :-)

Instead I’m going to jump straight to the headlined news….

Jonathan has now officially graduated, and is planning on doing some Interesting Things. (For further details you’ll have to beg him to post) 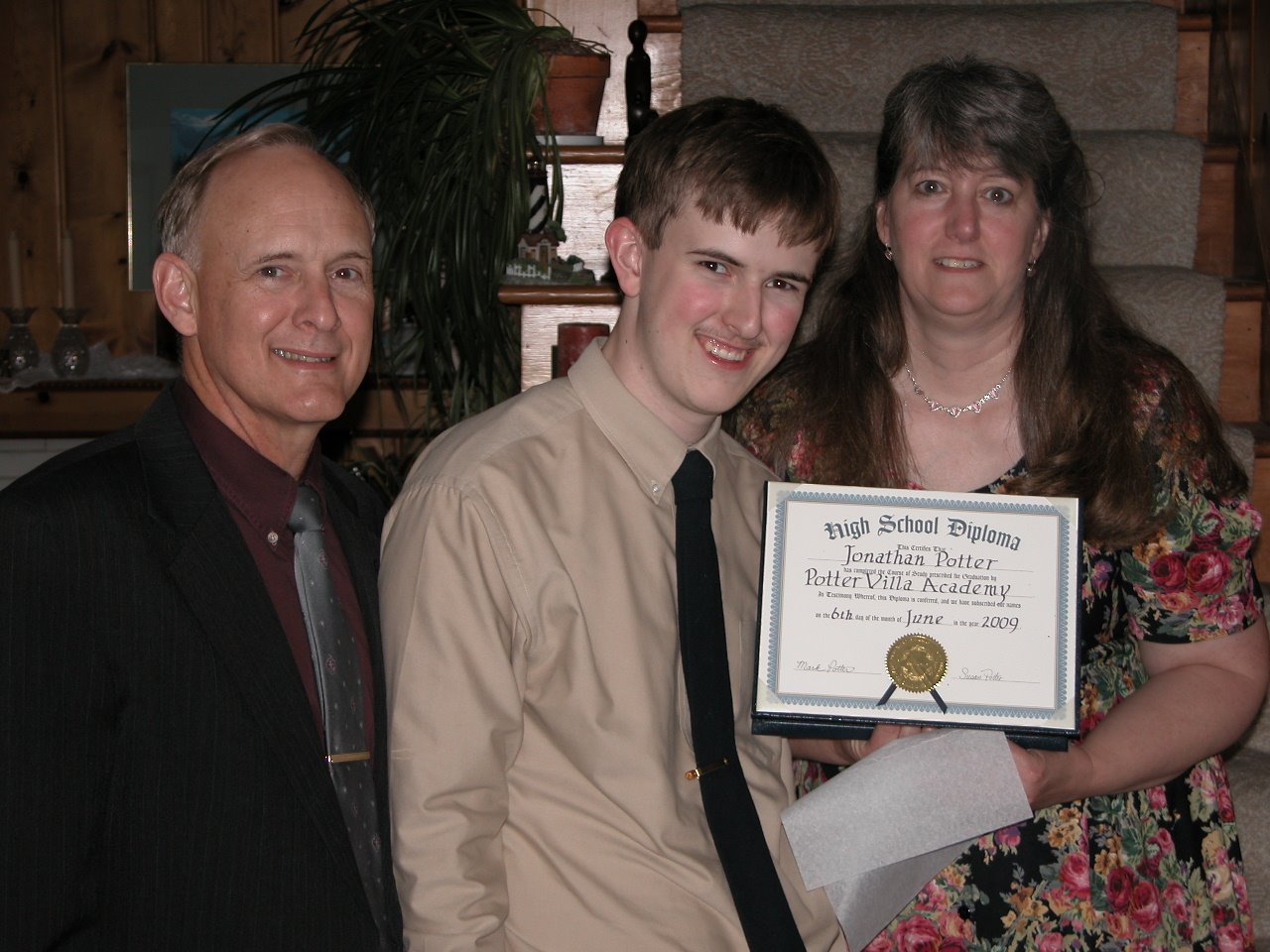 As you might be able to tell we had a very formal graduation ceremony! ;-) The place was packed out. It was just about standing room only–the camera man (that’s me. Well actually I was substituting for the real camera man–he was graduating, and the real video camera man–he’s the principle; which left only me to run both cameras. Quite dangerous really.) did get a chair, which was awfully handy because I needed all the stability I could get to keep the camera still. And I guess the dog did lay down through most of the proceedings. So it wasn’t quite standing room only….

Now that I think about it there were fewer people there than at my graduation. (Grama was here for his open house (I managed to avoid that horrendus experience where droves of people decend on you like a swarm of bees [the difference being that, as I understand swarming bees {honey bees anyway} don’t sting]) but had to leave before the official ceramony, where she was here for mine)

Our other big piece of newsworthy news is that Dad is officially employed again after ten months of being off work! We are thanking the Lord for this encouraging turn of events. He’s had several interviews that didn’t pay off, but then he had one through a certain recruiting agency (what it’s called I don’t remember, and it doesn’t matter in the least) and the next morning they called up with a job offer. Yesterday was his first day. So far so good. {he’s now been there for a week. Still so far so good. }
It is classified as an “indefinite contract position” which means, in practical terms (money) that he is an hourly employee with no benefits–however there isn’t a time limit on employment. It’s a very different situation than what any of us are used to. The company–Tenneco–is “one of the world’s leading designers, manufacturers and distributors of emission control and ride control products and systems for the automotive original equipment market and the aftermarket.“-from the tenneco website http://www.tenneco.com/Overview/ The plants Dad will be working at are in Jackson and Grass Lake, about an hours drive from here. But all and all, it seems to be something that will work, for now at the very least. The company does sometimes hire the contract workers to work directly for them.

The Chickens are doing well, they survived my method of overwintering them (portable coop with a couple of extra layers of plastic and a heat lamp for the coldest of nights) on the garden and are now happily ranging over part of the backyard. I put up a (fairly short, 39″ I think) woven wire fence with a few hog panels for a gate, and that has kept them in with a very few exceptions–for which we have Baxter! We have not had to clip wings or anything. They are just happy staying in. Perhaps it’s because they know Bax will get them if the get out. I had one die of unknown cause and one that needs to be butchered but were still averaging 7 eggs a day out of 9 hens (not counting the one to be stewed). 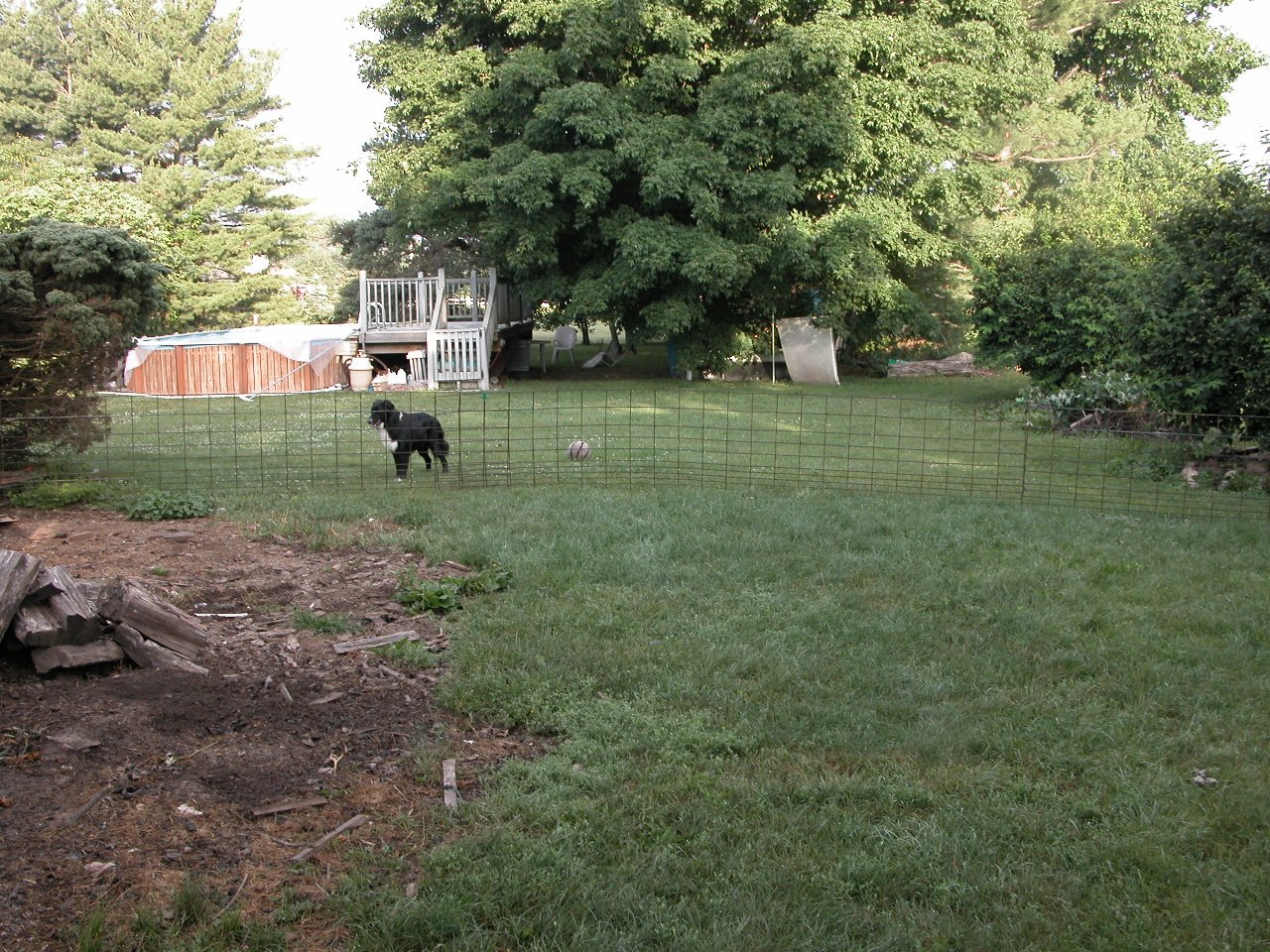 This is their current home: 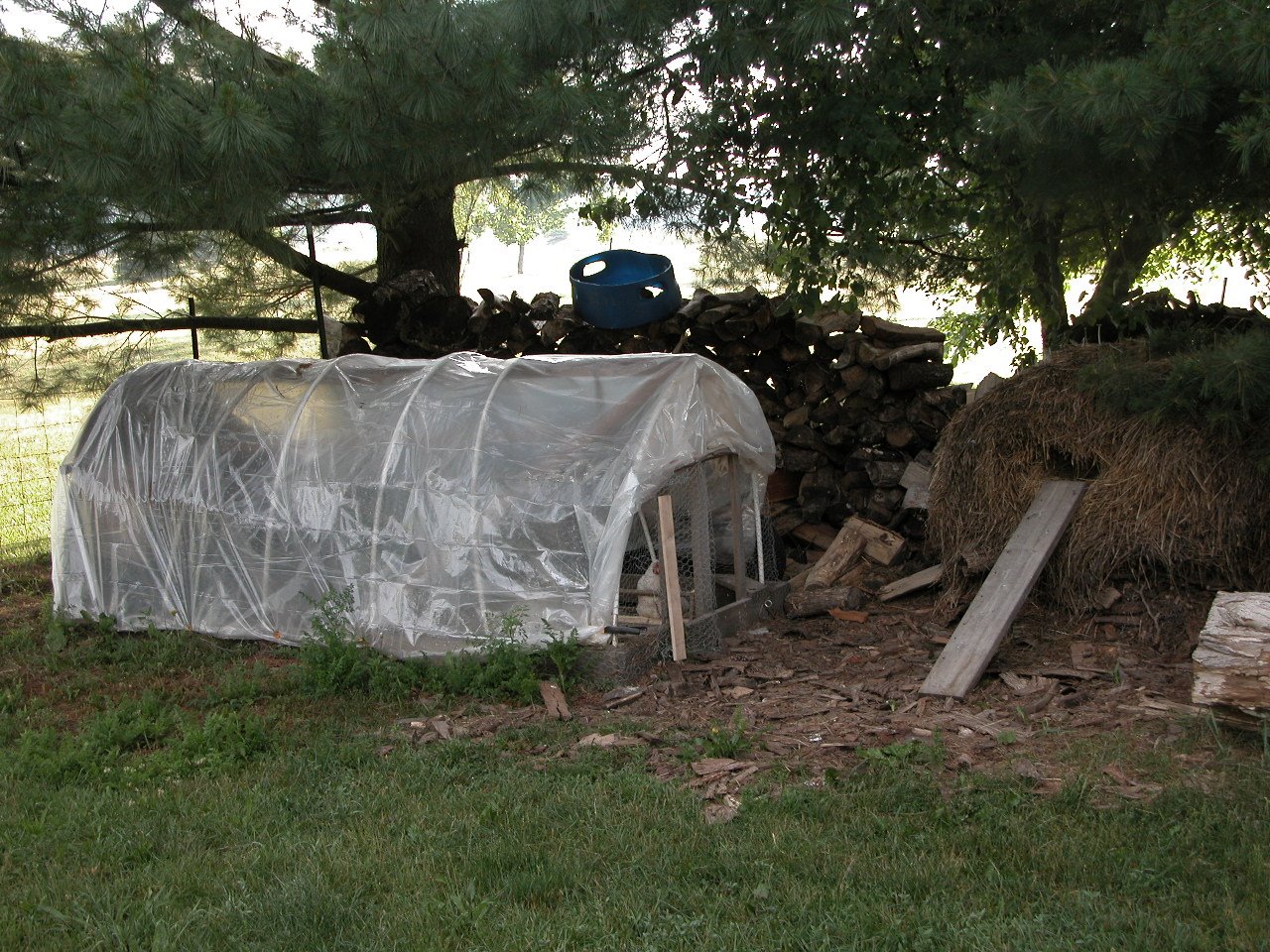 I am also in the process of raising a small batch of broiler chickens. They’re currently just over five weeks old. Since I was getting quite tired of filling their one gallon fount over and over and over again I bit the bullet and payed out the 4o bucks for a bell-matic poultry waterer. Those things are pretty slick. Plus it helps ensure that the birds always have a supply of water. 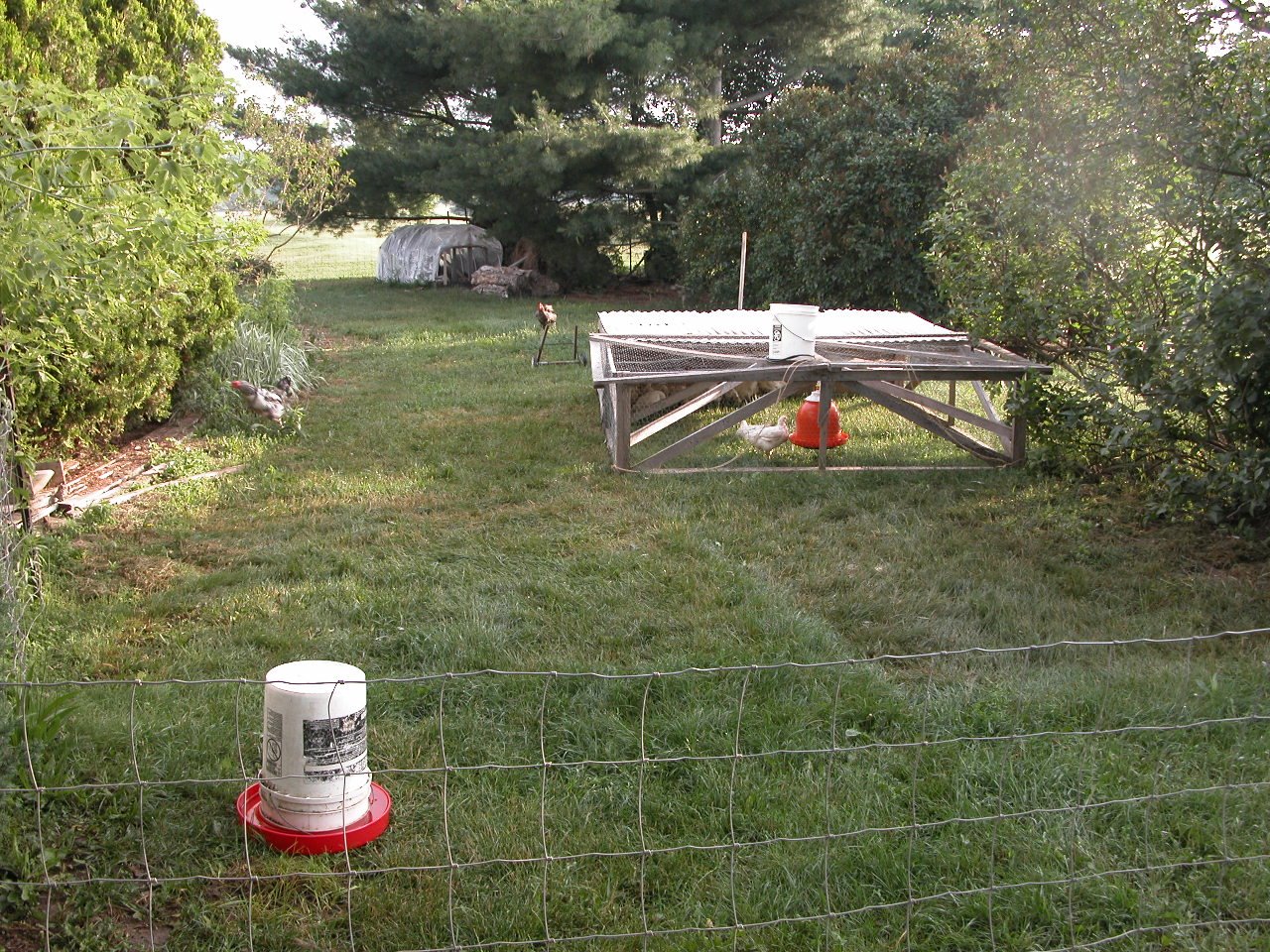 The garden is doing quite well these days, we’ve had quite a bit of rain and warm temps–not so good for the lettuce, but the corn and tomatoes are gobbling it up. The corn (which I got planted none too early) is up even to Jonathan’s knees (he’s 6’5″) [ It’s now about 4 days later and the corn has shot up to roughly waist high]. I was really late planting this year, for reasons I don’t clearly remember, but it’s been a fairly cool year too. Or at least up ’till now–tomorrow it’s supposed to be 90 degrees. Too hot for mid June, in my humble opinion. 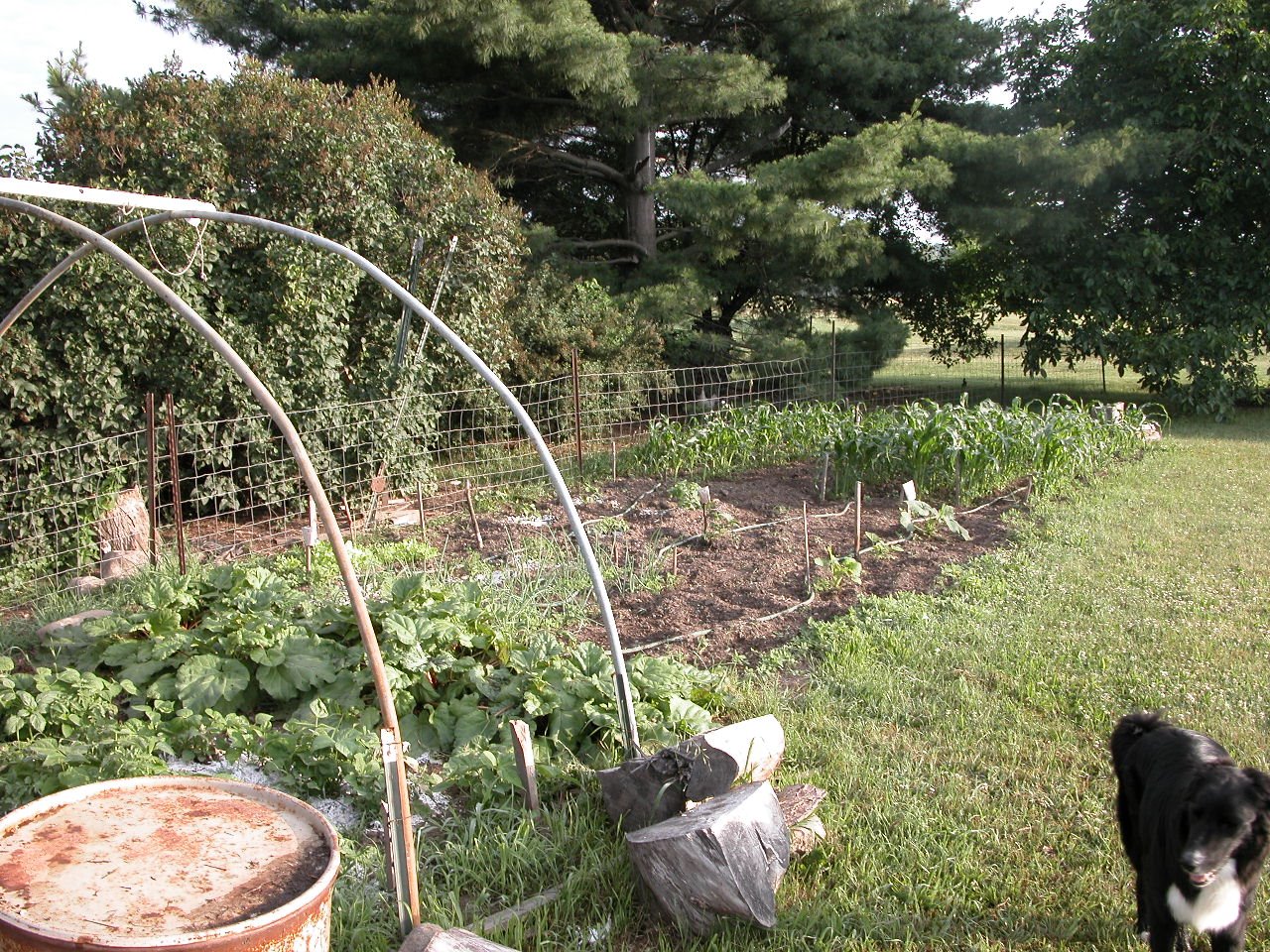 Following is a picture of where I hope to have a garden next year. It is just across the road from us. The spot where I plan to rent is right up to the road so it would be feasible to have a little stand if I come up with enough extra produce to make having such a thing worthwhile. I had hoped to have use of it this year but the people farming it currently had already seeded it to wheat by airplane before the soybeans were harvested (which was when the owner talked to them about letting me have it). I still want to keep some sort of garden where it is now too. Perhaps extending the hoop house and installing the wood stove I bought this spring at an auction. 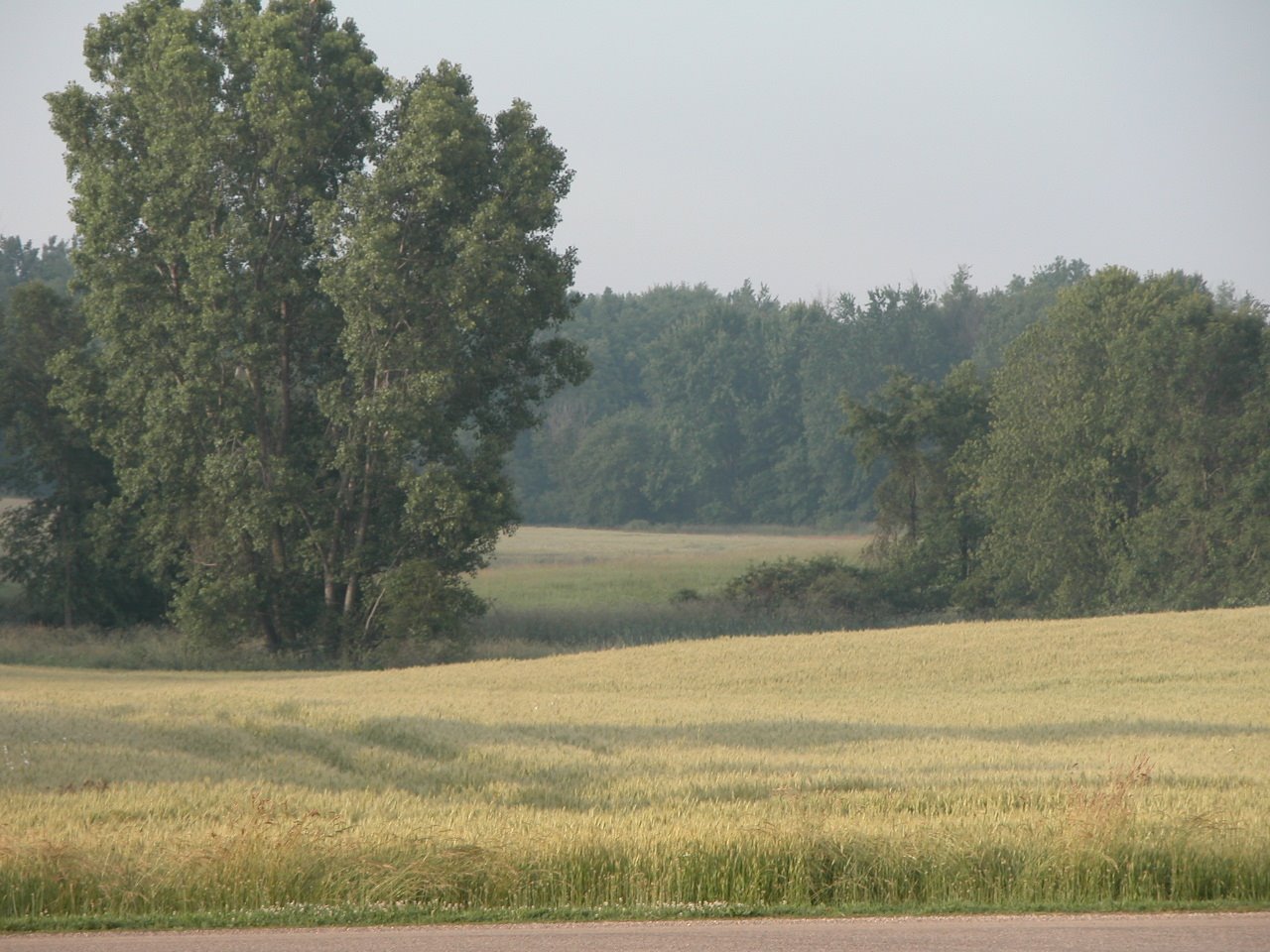 Another big project we’ve been working on is our roof. A major hail storm (golf ball sized hail) ripped through our area last summer devastating many crops (or completely wiping them out in the worst hit places) and damaging almost all of the roofs in the path of the storm–ours included. So the insurance company paid to have the house and garage roofs torn off and replaced. We thought it sounded like a good way to make/save some money so we did most of it ourselves. 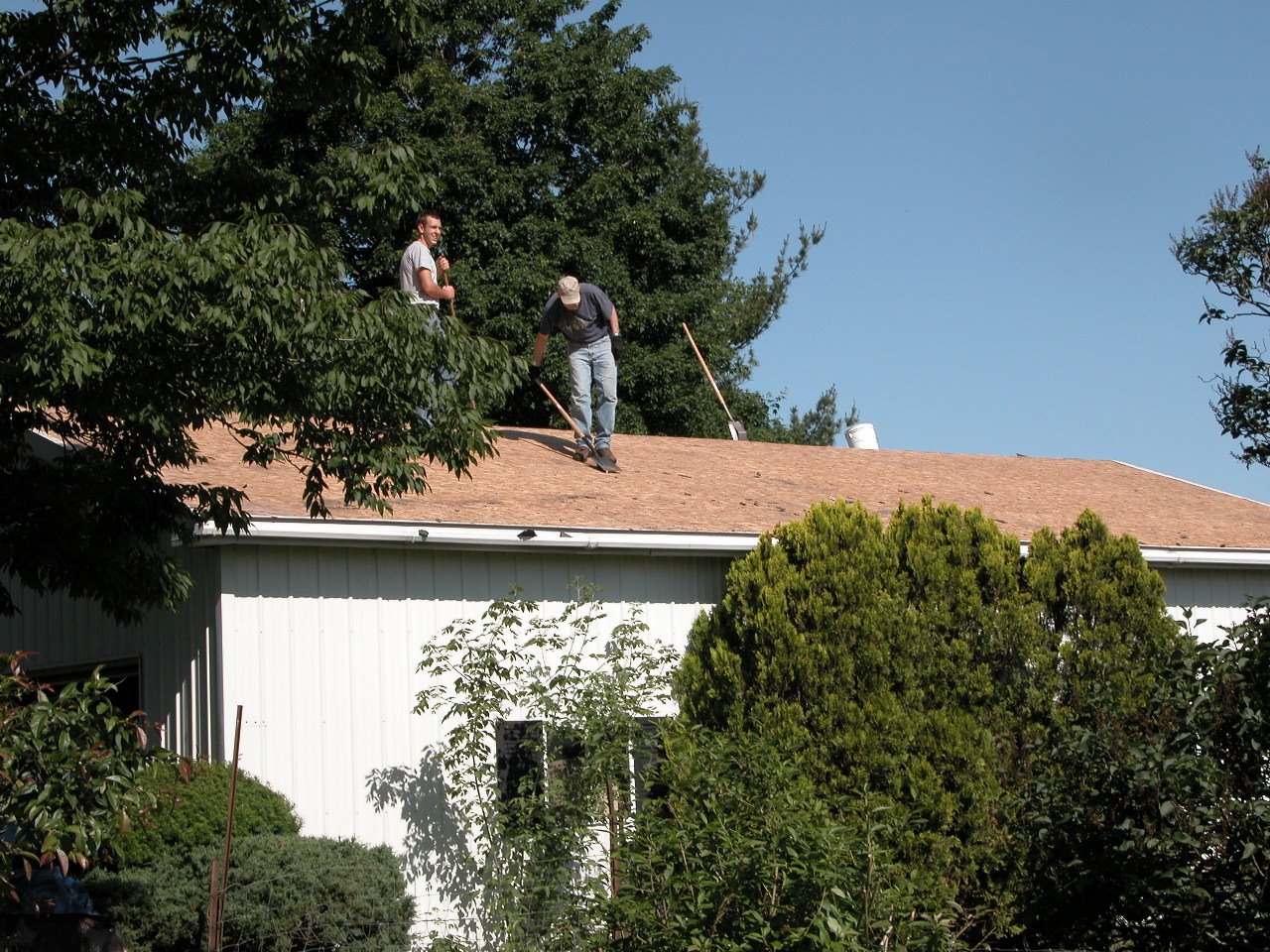 The second story roof is just too steep and high for us to feel comfortable working on it, so we hired a contractor to do that part. 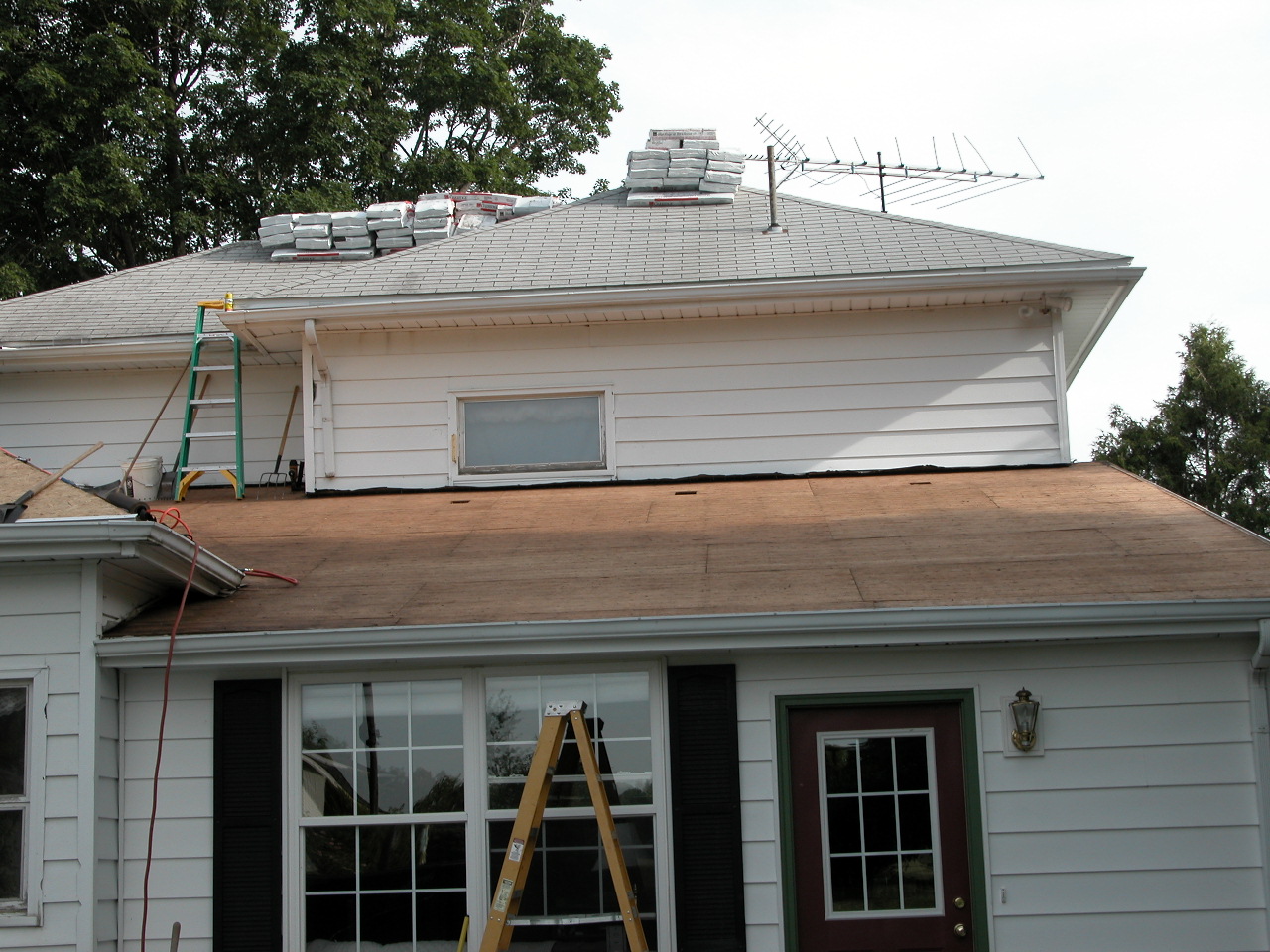 We were able to borrow a skid steer from the W.’s (they have the farm I help on). That sure made things a lot easier….Here we’re using it as a scaffolding. This roof is the same pitch as the second story, it’s just about 20 feet closer to the ground! 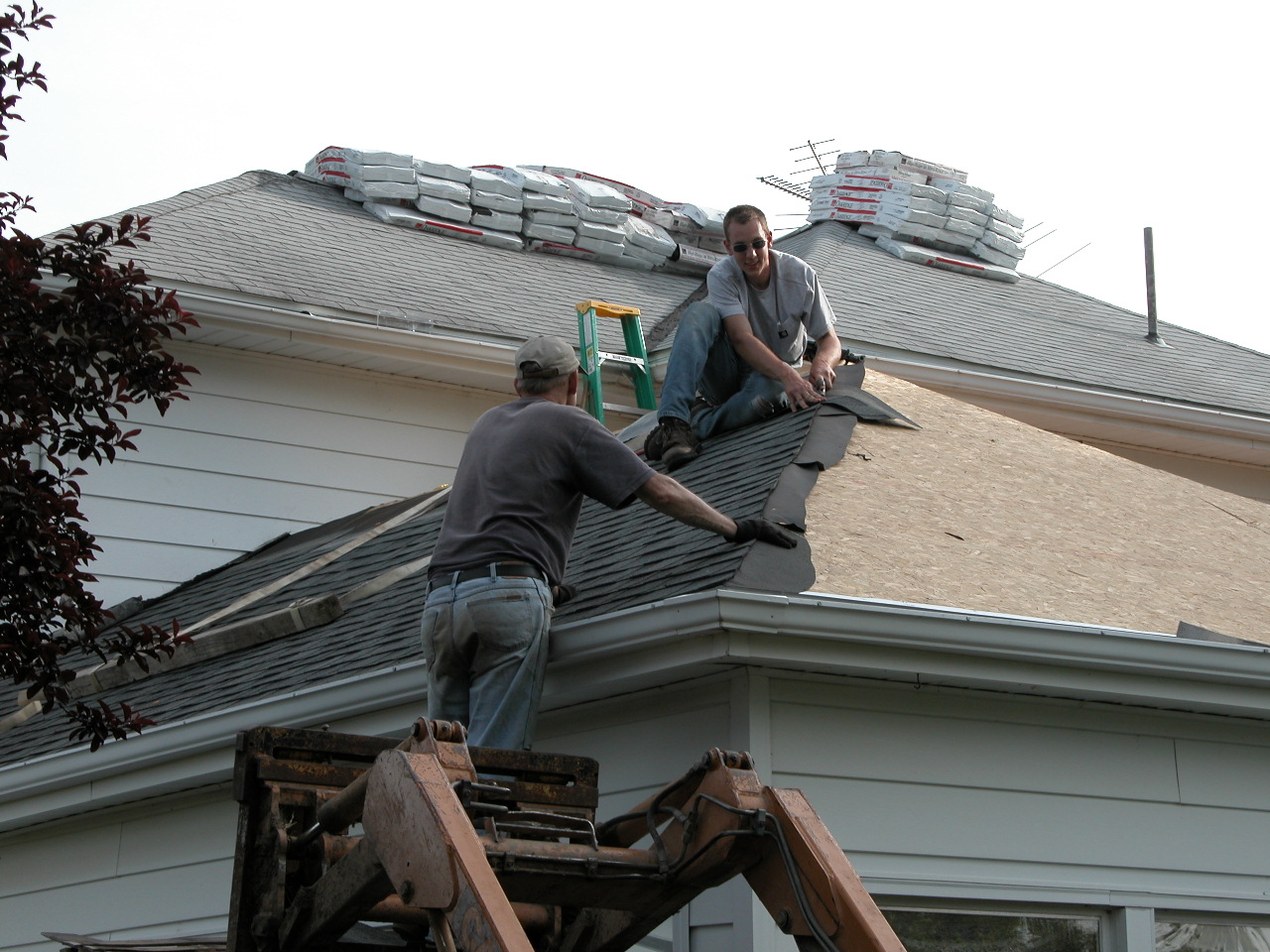 It don’t look too bad, does it. 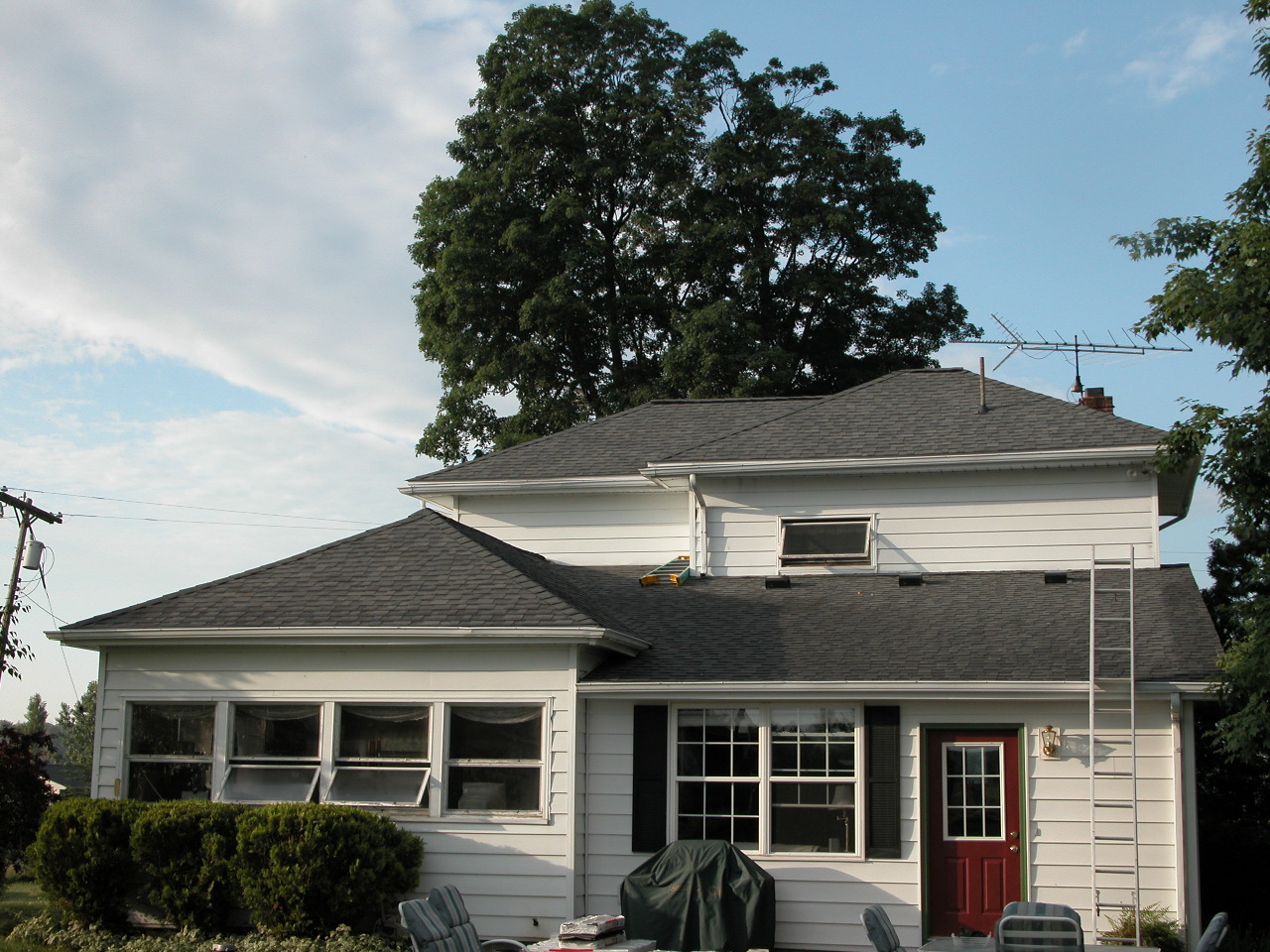 Our neighbors to the east (they’re a middle aged couple and a pug named Molly) replaced their roof and some siding last summer. Then some time this spring, (late March or early April I think; can’t remember just now) their whole house burned to the ground. They barely escaped with their lives. Her hair was badly singed and his back looked like it had been badly sunburned. (The dog made too, not much the worse for the wear)

Our city has two fire departments, one on each side of the railroad tracks (their volunteer) but they still had to call in tankers from two or three other departments to get enough water to control the blaze. 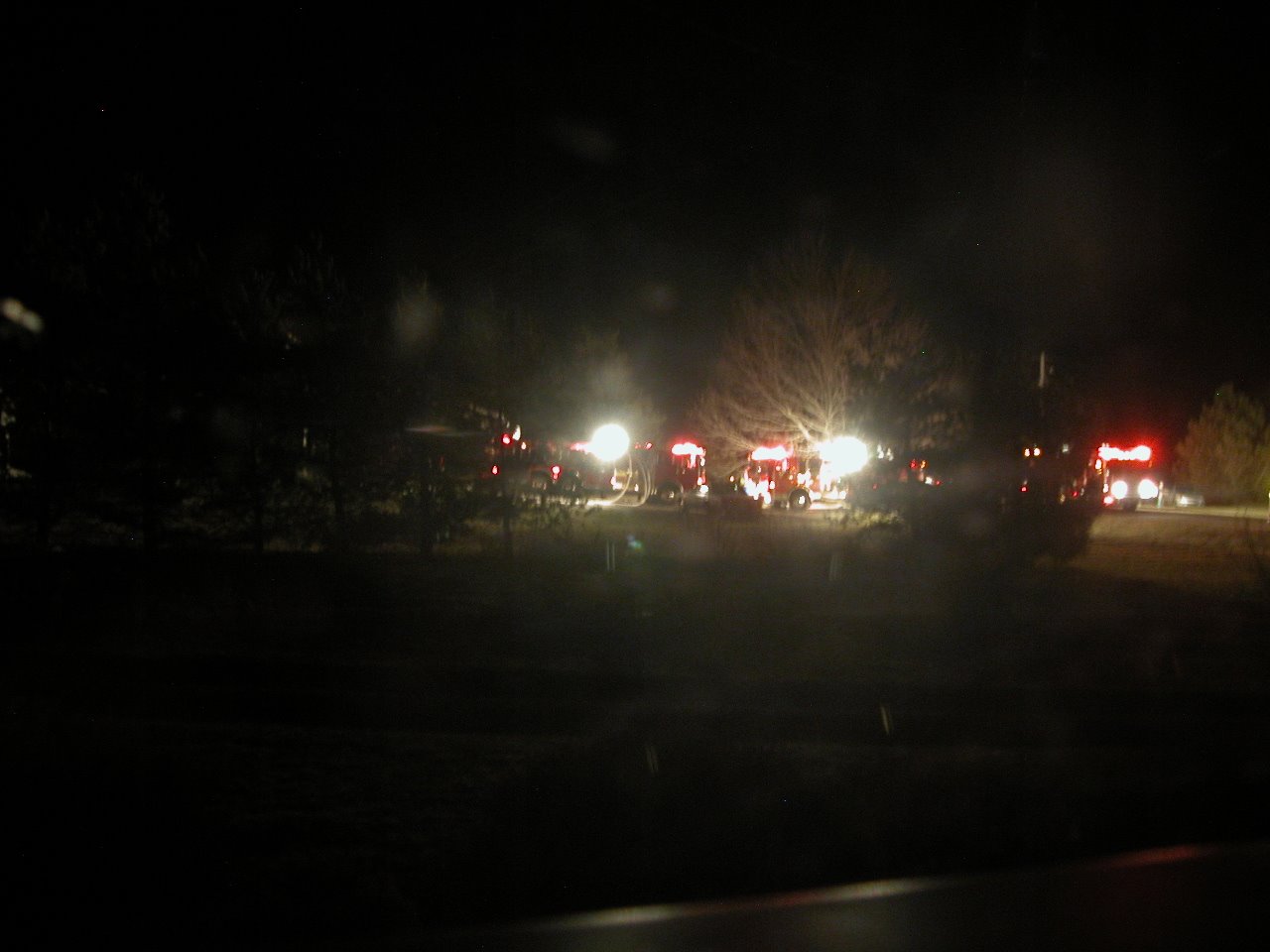 Now several months afterwords, and after an excavator, bulldozer and several semis worked for a couple of days it looks like this: 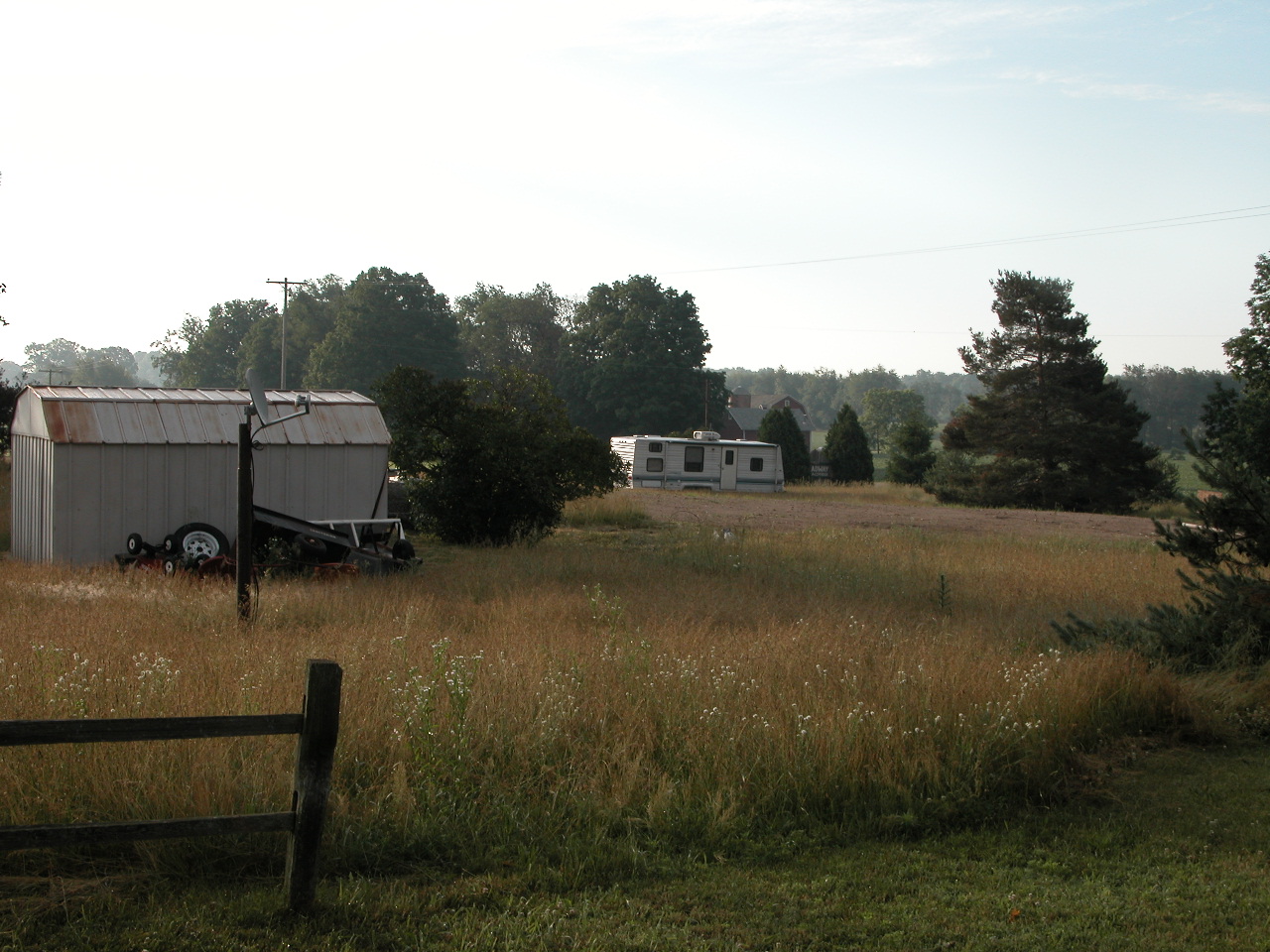 They asked us to mow it for them, and I ended up getting a brush hog from the farm to come in and get it all knocked down–it was just too thick for our poor mower to handle.

Speaking of the farm…We’ve been baling hay. About 80 acres of it. This time around it’s been almost all round bales which just involves moving them with the skidsteer…for second cutting we get to square-bale almost all of it. So if you need something to do on those 80 degree days in the middle of July, let me know. Part of the reason we’ve round baled so much of this first cutting is that it’s been so dog gone hot. The thermometer has been reading right around 120 degrees in the sun,with humidity up around 60%. I’ve always wanted to help put up hay someplace like, oh maybe Alaska, where you could be comfortable working in a ligh jacket while mowing away hay. Ah, well, as they say make hay while the sun shines. It sure does get hot in that sun though, even though I slather on the sun screen in the morning my face still got so burnt that my nose is starting to peel–that first time I ever remember that happening. What ever happened to the cool year that “they” were predicting?!? Must be we’re back to global warming now. :-)