Well….I have finally gathered up enough courage to start this endeavor. My name Matthew, and I live with my Mom (Susan), Dad (Mark), Brother (Jonathan), Cat (LaGata) and the newest edition to the family–the puppy (Baxter). We live in a two-story farmhouse on roughly 1.5 acres. However, the neighbors across the road are very generous about letting us (mainly me) tromp through their fields and woods.

Dad is an electrical test engineer at a company currently called VonWeise–although it has had a dozen or more names in the twenty years he has been working there. Another thing that keeps changing is his job description but he mainly spends his days working on testing and test procedures, when he isn’t busy helping someone that is. Dad also has just finished a term on our church board, and has taught a Sunday School Class (filled mostly with very rowdy, attention starved boys) for the past several years. He is very patient and kind, and not easily upset, something I have benefited from greatly over the years. I am very fortunate and blessed to have him for my Dad!

Mom is a one woman army! She has accepted the challenge to adhere to the biblical principles for a Christian mother, she cooks (bakes the best bread you’ve ever tasted, [not that I’m biased at all =) ]), cleans, teaches our witting class (sort of a co-op), and Jonathan and I (to the extent the we need it at this stage) , is now tutoring some South Korean students in English over the internet, and is helping edit a missionary friend’s many-year backlog of online forums for online publication, and still finds time to do some of her hobbies. (sorry for the long sentence but I was on a roll)

Lately Mom has become interested in working with wool, and was carding some into rovings to make Jonathan and I quilts, before she started the tutoring. She helped with covering some classes for another lady this week and so was teaching both in the morning and at night. She also teaches piano on Wednesday afternoons. You might have noticed that she does a lot of teaching–it’s her gift! It is also something we all have benefited from. Mom also doubles as our career counselor, life coach, and adviser. Additionally, She and Dad and Jonathan are involved in AWANA at our church on Thursday nights–I used to be, but they didn’t really need me and someone has to stay home and do the dishes ;=) And did I mention that on Wednesday mornings, now right after tutoring, she has a prayer meeting for some of the ladies from our church? (I hope y’all don’t mind but I like to brag on my Ma now and a again) She is amazing! On top of all that she manages to keep up with me and Jonathan’s various and frequently quite different interests. I don’t really know how she does it all. We used to sometimes joke that if I could find a wife just like her, except with a few hundred acres, I’d be all set. But I’m quite sure that there isn’t another person out there just like her. She is indeed a pearl above price!

Jonathan has very eloquently described himself and interests below, so I won’t go into it a whole lot except to say he is an awesome pianist and he has a self-recorded, self-published and self-produced piano CD for sale for a donation of any amount. If you like hymn arrangements and easy listening type music–this is for you! My favorite is the B-I-B-L-E medley. It is technically a Christmas CD, with many old time favorites (Let All Mortal Flesh Keep Silent, Angels from the Realms of Glory, Il Est Ne, and Go Tell It On the Mountain etc.), but a lot of the songs are good for any occasion (Variations on Pacabell’s Cannon in D movement 1,2&3, The B-I-B-L-E medley etc.). A full track list and sound bytes are at pottervilla.net/cdsampler. 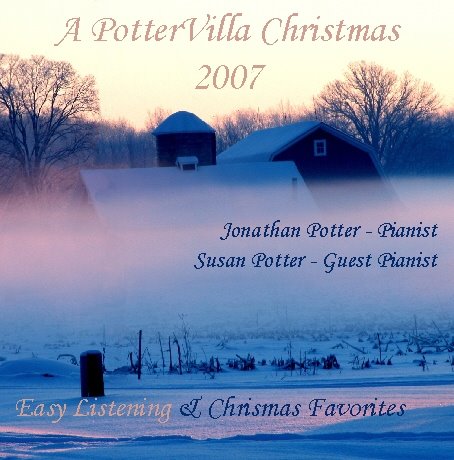 I guess that leaves me…. Let’s see…. My name is Matthew…. Oh, I already said that! :=) I am 18, and about 6’4″ tall. (Jonathan is at least 6’5″). I am interested in the out doors mostly, although I don’t always do much out there. My main problem is not enough to do–but I think the new puppy solved that dilemma! I am still technically in school (a fifth year senior) but at this point I am concentrating more on garden planning and chicken raising (and now of course dog training).

I ordered 25 st. run heavy assorted chicks from Murray McMurray Hatchery, back in January, and they arrived on February 25th. I had prepared them a lovely cardboard box by the furnace in the basement with plastic covered by many layers of newspaper topped off with several inches of wood shavings. I had hung a 250 watt R-40 heat lamp 18 inches from the bedding, and Mr. Electrical Engineer Dad helped my fix up the variack (sp?) (a whatchamacallit that allows you to control the power to what ever is plugged into it with a twist of a knob) so I could control the temperature very easily.

There was one chick that wasn’t doing well when he arrived, but other that that they all seem fine. Then they started dying off like flies. I don’t think I am doing anything wrong, but to make a long story short, most all of them came down with brooder pneumonia and died. Until yesterday, I still had four chick left, then one died about as soon as I got up, but the rest looked healthy. By eleven the biggest one was dead, but the other two seemed alright. Next thing I knew another one was dead. It was Five O’clock. Now all I have left is one lone, and lonely, chick. I don’t know what is wrong.

However the Hatchery has been very accommodating through this whole ordeal. In fact they are sending me an entire new batch of chicks, due to arrive the day after Easter. (We will be able to have a chick hunt, instead of an egg hunt!) I would definitely recommend McMurray’s….especially if this next batch of chicks survives!

Mom and I sat down the other day and came up with a plan of what to plant where in the hoop-house. Here is the Computerized version. 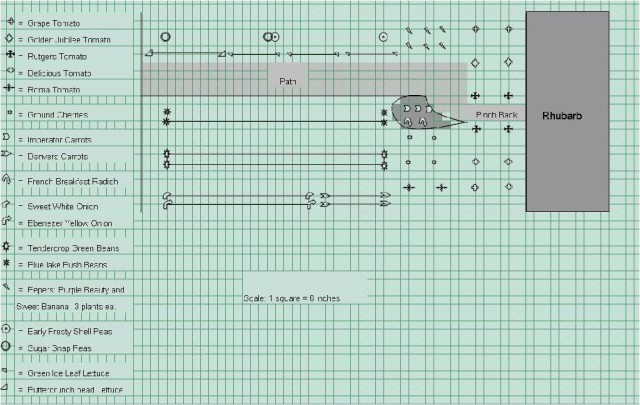 That is a pretty poor copy, maybe I can get a better one up later.

More on the garden and hoop-house (and hoop-coop, the mini version for the chickens based on Mr. Kimball’s Chicken Tractors, (If you are reading this–Thanks for the inspiration)) and other happenings later.

If I am going to drag myself out of bed by six tomorrow morning, I had better hurry up and go to bed….right after I look in at the chicks and fill the furnace with wood, and take the dog out one more time :=)