We have a new dog! Well actually he’s been here since Monday afternoon, so I guess he’s only sort of new :-) 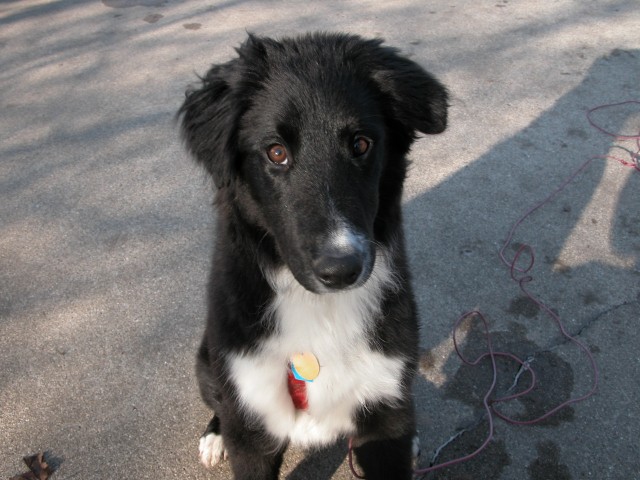 As Jonathan mentioned previously, “Baxter” is part Border Collie, and part Newfoundland (we think). Everybody (including me) keeps going on and on about his feet, but since they are white they are set off nicely. However, what I really find interesting is that between each of his four toes is some sort of webbing–which I guess the Newfoundlands have. Also his pads are slightly rough and sort of sticky or something, he is able to walk on a glaze of ice with no difficulty whatsoever. It is almost a problem, because if you are following him over icy ground, he tends to make the bad spots look no worse than dry ground.

Baxter was originally named after Baxter Black, the cowboy poet, by our Pastor’s wife when he was their dog, but we have renamed him after Miss Sadie Baxter–the kindhearted old maid, and benefactress of Lord’s Chapel in the Mitford series of books by Jan Karon. She once claimed to be “firm and slightly tart.” Although Baxter (the dog) is not at all firm, and is more a sweet little (or not so little) puppy than tart, we think that is pretty much what he needs at this stage of his life. ( the firmness, slightly tart that is) 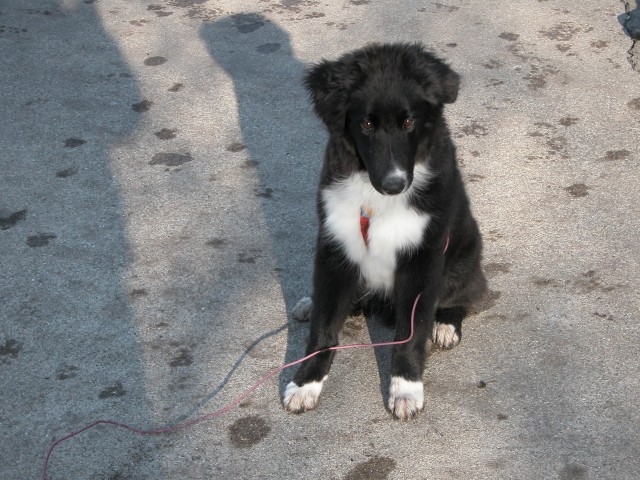 He has the prettiest markings (especially when his feet aren’t dirty) and his fur is so soft. He is also quite agile. In these pictures he’s playing with the innards of a golf ball. 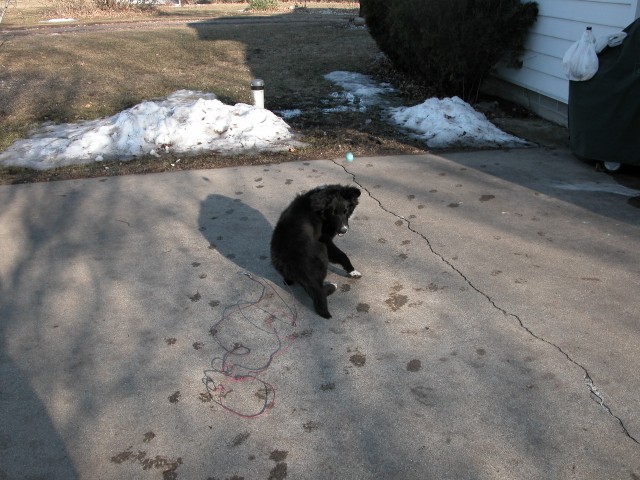 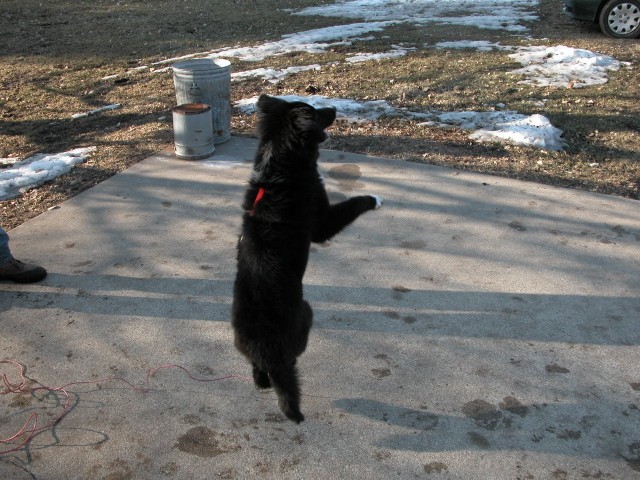 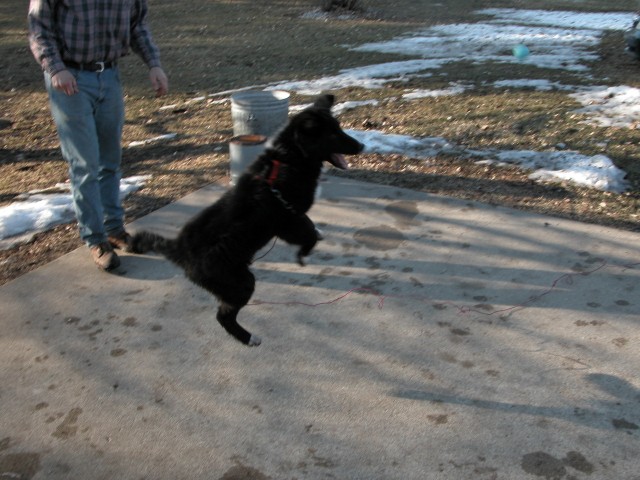 The dog seems to be pretty smart, we just need to work on making sure he knows he can’t get away with much. He’s not quite housebroken–but we have a carpet cleaner!! Fortunately, he’s only had one accident so far, and I think that was probably my fault–I was trying to catch up on blog reading and start writing while everyone else was gone and didn’t keep track of him as well as I should have.

It is nice to have a dog again though, particularly one that will do something. After our older dog (a Cocker Spaniel and Lab mix) died at 10yrs old around thanksgiving, we had several qualifications for a new dog (although not all of them were met) #1 Floppy ears for Dad. #2 Not too big for Mom. #3 Short hair for Jonathan, who is semi-allergic to dog hair (along with almost every thing else: Grass, Trees, Cats, Dust, Peanut Butter, Soy, and sometimes Me :-) ) and #4 Will do something for Me.

Baxter met most of the qualifications, except for the short hair, and how could we refuse him?

One of his favorite games is chasing a running person and then getting in front of him to herd him back to where he started from. A couple of nights ago, Dad Jonathan and I were all out letting him chase us. I would run one direction, and then when he caught me, Jonathan would run the opposite way (from where I started) and then when Baxter caught him, Dad would run a different direction until the dog caught up with him, and the process would repeat. Good exercise for all involved! Unfortunately, the ground is really soft, and when I run I sink in about two inches–making it rather hard to go very fast. Not that it matters how fast I go, that dog can run like the wind, and turn on a dime. I imagine that’s why they use border collies for herding sheep. We may have to get a few!

Our last dog, Lady was short and fairly fat, and could hardly keep up with me walking fast, so it is really fun to have a quick dog. Of course that was later in her life, and she was really Mom’s dog, Lady would lay by her wherever Mom went. Sadly, we had to have her put to sleep the Monday after Thanksgiving. The vet had removed a tumor from her awhile before that, and surmised when he put her down, that it was probably cancerous. I got down stairs that morning, and found her all twisted up and leaking bloody urine. Dad and Mom and Jonathan took her in to the vet soon after where she was put to sleep.

Overall she was a pretty good dog, especially at eating any people food that happened to come her way. It’s kind of funny, because Lady was such a “Mom dog” while Baxter doesn’t really like her as well–he’s sort of attached himself to me (not that I mind the least bit).

Baxter is really a very nice dog, he’s just so active. He has a really sweet personality, and will give most anybody a free face-licking. Pastor and Ms Kathy are sad to give him up, but he is just such a puppy that they couldn’t keep up with him. Ms Kathy is home most of the time, but Pastor is usually over at the church studying, or out farming, so he couldn’t help with Baxter very much.

So he’s ours now, and a very nice dog he is.

Here in Michigan, we are blessed by pro-homeschooling regulations at the state level. Our friends and countrymen in California are not so fortunate. More than 160,000 families educate their children at home in California, and are affected by the recent district court ruling. Justice Walter Croskey’s strong language and vehement attacks to constitutionally upheld parental rights threaten to drive those 160,000 families to different states. Home School Legal Defense Association officials have put together a petition to de-publish the ruling, limiting its influence on other cases. By signing online, supporters of parent’s rights all across America can uphold our friends in California.